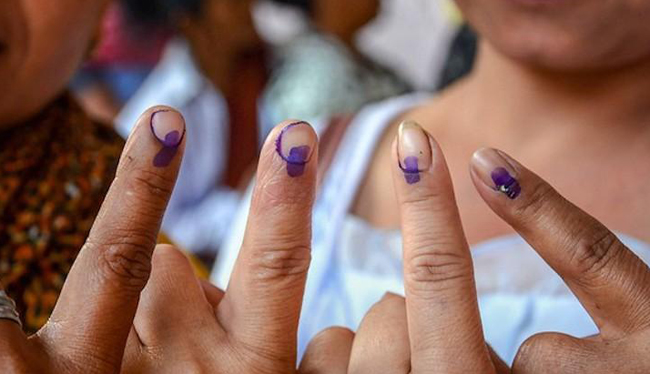 Bengaluru, Apr 24: An estimated 68.15 % of the 2.43 crore electorate voted on Tuesday in Karnataka's remaining 14 Lok Sabha seats across the state's western and northern regions, an official said.

"The overall voter turnout is 67.66 after polling ended at 6 p.m., with all those in the queue by then also casting their ballot," a poll official said.

Among the 14 seats, Shivamogga in Malnad region registered the highest voting of 76.43 per cent, followed by Chikkodi with 75.42 per cent, Uttara Kannada with 74.07 per cent and Davanagere with 72.57 per cent.

Bharatiya Janata Party (BJP)'s B.Y. Raghavendra is the candidate in Shimoga against Madhu Bangarappa of the Janata Dal-Secular (JD-S). They are sons of former Chief Ministers B.S. Yeddyurappa of the BJP and late S. Bangarappa of the Congress, respectively.

Union Minister and BJP's five-time MP Anantkumar Hegde was in the fray from Uttar Kannada, while Congress leader in the 16th Lok Sabha, Mallikarjuna Kharge is contesting for a hat-trick from Gulbarga (SC) against BJP's Umesh Jadav.

Voting was held in 28,022 polling stations across the regions peacefully barring stray incidents and delays due to glitches in EVMs and VVPATs initially.

With the ruling JD-S and Congress fielding common candidates as part of their pre-poll alliance, the BJP was locked in a straight contest with them after nearly three decades.

In the Ballari (ST) seat, BJP's Devandrappa faced outgoing Congress member V.S. Ugrappa who wrested the seat from the BJP in the November 2018 by-election.

The BJP has not fielded any woman in this phase. Its sitting member Shobha Karandlaje re-contested from Udupi-Chikamgalur in the April 18 polling.

In the 2014 elections, the BJP won 11 and the Congress 3, with JD-S none. In the April 18 polling in the central and southern region, the overall voter turnout was 69 per cent.

Of the 14 seats, the BJP contested in 13 and supported Independent multi-lingual South Indian actress Sumalatha Ambareesh in the high-profile Mandya against Nikhil Gowda of the JD(S) and son of state Chief Minister H.D. Kumaraswamy and grandson of  JD(S)   supremo H.D. Deve Gowda.

Of the 14 seats on April 18, the Congress contested 10 and JD-S 4, including Hassan, Tumakuru and Udupi-Chikkamagaluru. In the 2014 elections, the BJP and Congress won 6 seats each out of these and JD(S) won 2.