Mysuru, Oct 15: Air India has decided to commence its service from Mangaluru to Mysuru after October 25.

Official sources said here that a final decision will be taken based on the feasibility report after trail run. Lok Sabha Member Pratap Simha and some industrialists had requested the flight operator to run air services between these two cities that are now connected by road and train.

Air India may divert the flight coming here from Benglauru at 6.50 am to Mysuru, the flight to Mysuru will depart at 7.55 am and reach Mangaluru at 8.50 am

Mangaluru, Sept 5: The coastal district of Dakshina Kannada, which shares its border with Kerala, has recorded 130 fatalities in August, making it the district with highest number of deaths in the state for the said month.

One in every five Covid deaths in Karnataka has occurred in Dakshina Kannada in August. The district, in its defence, said 29 of those deaths were of patients from other districts, which if taken into account, the coastal district would still tie with the state capital on the districts with most number of deaths for the month.

Dr Ashok H, Covid nodal officer for Dakshina Kannada district, said that the positivity rate over the past seven days in the district has dropped to 2.04 per cent and case fatality rate to 1.43 per cent.

"Out of 2,248 active cases, 1,486 (66.1 per cent), are in home isolation, 544 (24.2 per cent) in hospitals and 218 (9.7 per cent) in Covid Care Centres. The reason for higher hospitalisation rate compared to other districts is that we are admitting nursing and paramedical students, who are testing positive, who don't have severe symptoms, to hospitals so that they compulsorily remain isolated," he said.

"We have 32 paramedical and eight medical colleges. We got clusters from there when we screened 7,000-odd students. Sullia also had 8 per cent positivity rate previously for one month but now has only 145 active cases," he added.

Now the focus is on Beltangady taluk which has the next highest active cases with 296.

"Deaths are high because medical colleges like Yenepoya are getting referrals from other districts under Ayushman Bharat-Arogya Karnataka. Earlier we would send them back to their districts but now with the centralised bed management system, deaths of patients from other districts occurring in Mangaluru are being recorded as Dakshina Kannada district's deaths," Dr Ashok said. 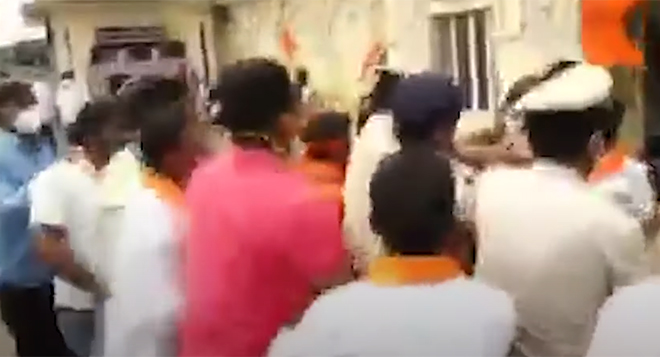 Bengaluru, Sept 17: The Karnataka assembly on Friday passed the 'Identification of Prisoners (Karnataka Amendment) Bill,' which seeks to include collection of blood, DNA, voice and iris scan samples as "measurements" of offenders for effective surveillance and prevention of breach of peace and crime.

The bill, which amends the Central act of Identification of Prisoners with respect to its application to Karnataka, also empowers Superintendent of Police or Deputy Commissioners of Police, in addition to the judicial magistrate first class, to order for collection of measurement to avoid delay and workload.

Piloting the bill for the consideration of the House, Home Minister Araga Jnanendra said "till now foo-print impressions were collected. Now we have added blood, DNA, voice, and iris scan samples to it. Earlier the measurements were collected for those with rigorous imprisonment for a term of one year, now it has been changed to a term of one month."

He said the bill empowers SPs and DCPs to order destruction of measurement after a period of 10 years, unless otherwise directed by the court or any other competent authority.

Participating during the discussion on the Bill, Congress MLA Tanveer Sait sought to know whether collecting measurement was necessary when such details are available in an individual's Aadhar data. Another Congress MLA Priyank Kharge said the government intends to create a database of biometrics and forensic tools needed for investigation and also sought to know whether the necessary infrastructure was in place.

"Also, has the government thought about the right to privacy?"

Responding to the queries, the Minister said, measurements were collected for those with Rigorous Imprisonment for a term of one month and above and it will be stored in the criminal tracking system in Bengaluru, so there will be concerns of any breach.

He said it would also be helpful in identifying habitual offenders.

Also passed was a bill providing for the constitution of the Karnataka Prison Development Board for strengthening prisons and initiating correctional administrative measures. Titled 'Karnataka Prison Development Board Bill', it also provides for initiating measures for skill improvement, welfare of prisoners and prisons' staff and expanding prison industries.

The bill, in its statement of objects and reasons, said "it is considered necessary to provide for the constitution of the prison development board for development of modern prison industries and formulate a plan for job oriented technical programmes in different areas, to earn incentives."

The board can suggest ways and means for improving coordination between different stakeholders, examine the present setup of prison industries and formulate a plan for modernisation and to start job oriented programmes including technical oriented ones, keeping in view the needs of prisoners after release, it said.

Participating during the discussion on the bill, several legislators, including Congress' U T Khader said reforms are needed, but prisons should also be a place of deterrent for prisoners, while highlighting several illegal activities taking place in them.

Pointing out that the Minister for Prisons and other members of the board were all officials, some MLAs wanted non-official members like representatives of social organisations or journalists to be made members to have effective reforms, while others questioned powers of acquisition, maintenance and disposal of land and building given to the board.

The Minister, in his reply said the board has been constituted for all-round reforms of prisons and representatives from various departments will be its members and added that experts can be invited for its meetings to take inputs.

"States like Haryana are generating revenue of about Rs 600 crore from Prisons. Manpower at prisons should not go to waste," he said.

He also made it clear that there should be no doubts about disposing of immovable properties, as it cannot be done without clearance from the government, and there is a clause for it.

"The committee will rather look into effective utilisation of prison lands that have been lying unused."

Another bill passed today is 'The Code of Criminal Procedure (Karnataka Amendment) Bill' that provides for recording of the evidence of the witness by audio-video-electronic means in the presence of the advocate of the person accused of the offence.