Bengaluru, Jan 14: Assuring depositors that their money was "100 per cent safe" with the bank, Sri Guru Raghavendra Sahakara Bank Chairman K Ramakrishna in Bengaluru on Monday said 62 loans had locked up Rs 300 crore of deposit. 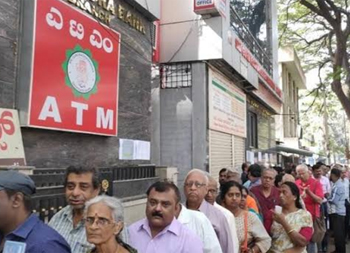 "Your money is 100 per cent safe with Sri Guru Raghavendra Sahakara Bank. It's my responsibility," Ramakrishna said at Sri Guru Narasimha Kalyanamandira auditorium, to assure depositors.

He was addressing angry customers of the bank at a public hearing. Due to the 62 dud loans, the Reserve Bank of India (RBI) had restricted the lender from executing business, Ramakrishna said amid shouting by depositors. The RBI has limited withdrawals by depositors to Rs 35,000.

"The bank is saying I can't withdraw more than Rs 35,000. In case of our fixed deposit maturing, we will have to renew it as we can't encash it, " said Nagaraj M, 49, who has been dealing with the bank for the past six years.

To assuage customers, the call to an assistant commissioner of police by Bengaluru South MP Tejaswi Surya -- not present -- was relayed on loudspeaker live and the MP claimed that he had spoken to Finance Minister Nirmala Sitharaman to help the customers.

Ramakrishna said he would meet customers again on January 19 with all the details and numbers. Dramatic scenes and pandemonium ruled the auditorium before his arrival. Thousands of bank customers threatened to go en masse to the police station and file a case against Ramakrishna.

As he addressed the gathering in Kannada, hundreds of depositors shouted back at him seeking clarifications. At the auditorium, thousands of depositors earlier demanded the bank chairman's presence to clarify the matter.

The lender had invited depositors to the auditorium at 6 p.m. to update them on the bank's status, following a RBI directive restricting the bank from doing business with immediate effect.

"We want the bank's directors here," shouted a depositor from the stage. A handful of policemen were trying to control the crowd and bring order to the assembly. Many elderly and retired persons had arrived to know the fate of their savings. Several women were also present at the meeting.

"It was a good bank with only 0.5 per cent NPAs. Now we can't trust any bank. See what happened with the PMC Bank," said another customer.

Shankar Sharma, 38, an employee of a private company, said majority of depositors were senior citizens and retirees. "I don't have an account with the bank, but my mother, uncle, aunt have deposited money in it. I came for them, " said Sharma. He said many of the bank's 35,000 clientele deposited more than Rs 5 lakh, which had total deposits of Rs 1,600 crore. The bank started operations in 1999.

Ramakrishna was escorted away to safety by the police after his speech even as the depositors were screaming and agitating for justice.