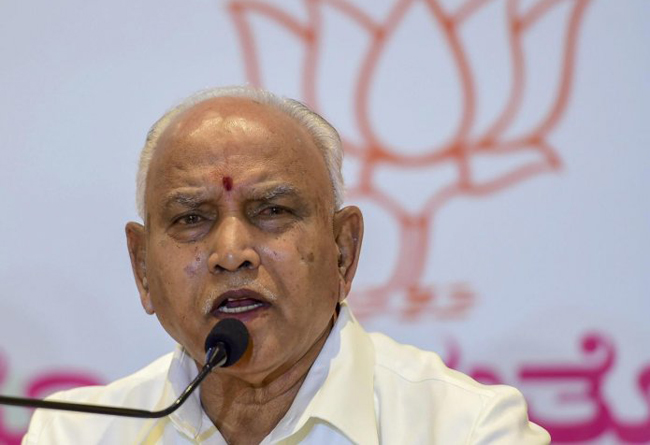 A day after Kumaraswamy raked up allegations against Yeddyurappa that he had received Rs 20 crore from the company when he was the chief minister during 2008-11, the BJP leader said he and his family members had been cleared of the charges by a CBI court in the case.

"Either the Chief Minister of Karnataka is lying or ignorant or both. It a well-known fact that CBI court cleared me and my family members of blatantly false, politically motivated charges that were heaped on us," he tweeted.

The CBI court in its October 26, 2016 verdict had acquitted Yeddyurappa, his sons, son-in-law and nine others in thecorruption case filed against them over alleged receipt of Rs 20 crore.

The BJP had been attacking the Congress-JDS coalition government over May 27 Cabinet decision to convert the lease of 3,667 acres of land in Ballari to JSW Steel into sale, in accordance with the initial agreement.

The party held a three-day long sit-in last week and attempted to lay siege to the residence of Kumaraswamy on Sunday over the issue even as the state cabinet decided to refer the decision to a sub-committee for reconsideration.

While criticising Yeddyurappa for not responding to his offer of talks on the issue and going ahead with its protest, Kumaraswamy Monday alleged the BJP leader had taken Rs 20 crore cheque from the same Jindal company while in power.

"Why did Jindal give him Rs 20 crore cheque? Whether it was Yeddyurappa or who did the lease-cum-sale for Jindal? Who signed it? So I invited them, lets not discuss on streets, come lets discuss. Still my government is open (for discussion)," he had added.

Hitting back, Yeddyurappa said Kumaraswamy was trying to mislead the people.

"Failing to have answers to the day light robbery of ourfarmers' lands, a panicked CM is trying to mislead the people with more lies and false accusations," he tweeted.

The cabinet decision to sell the land has run into opposition from senior Congress leader H K Patil also.

Congress Hospet MLA Anand Singh Tuesday opposed the sale of the land, saying it was against the interest of the people of the region.