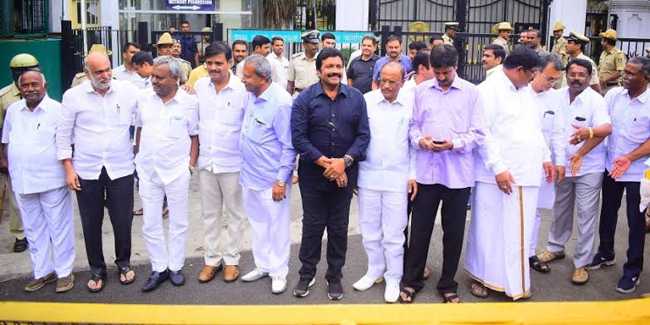 Bengaluru, Sept 15: With an eye on bypolls and to keep 17 disqualified MLAs in good humour, the state government has generously doled out funds for assembly segments represented by the former legislators.

Chief minister BS Yediyurappa on Saturday released Rs 26.5 crore for Hirekerur represented by disqualified MLA BC Patil to take up development works. This comes after several disqualified MLAs met Yediyurappa on Friday, expressing displeasure at being neglected by him and BJP leaders. They are miffed at BJP not extending any help in their legal fight to get the disqualification quashed by the Supreme Court. Last week, Yediyurappa had allocated Rs 11 crore each to Maski and Hosapete constituencies represented by disqualified MLAs Pratapgouda Patil and Anand Singh from Kalyana Karnataka Development Board funds.

Sources said the government has released funds to all 17 assembly segments ranging from Rs 10 crore to Rs 25 crore. “Both Maski and Hosapete were given funds after cancelling allocations to other segments made by the HDK government,” said a source. Those from Bengaluru got funds from the Nava Bengaluru scheme. According to a source, the government has released the highest amount for Hosakote constituency represented by MTB Nagaraj.

The biggest GADDAR leader in karnataka...people should not trust them..if war broke out thses marons will run to forign country and poor people wil die....so all my dear indian keep religion on side unite each other and build strong nation....without this they will treat you only for their benifit..

This is only an eye wash to make these people happy.  However, they should know that BJP cannot be trusted.  It will cheat and dump them in grave yard.   they did big blunder by trust bjp and got good lesson.   Hope they are not still sleepy and will open their eyes to know the truth.