Bengaluru, Dec 7: Senior Congress leader D K Shivakumar on Saturday threatened Karnataka Chief Minister B S Yediyurappa with "serious action" if his government indulged in "vendetta politics," as he demanded the restoration of allotment of medical college for Kanakapura. 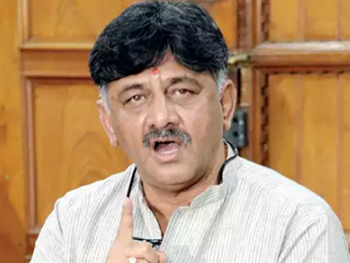 In a letter to Chief Minister Shivakumar, who represents Kanakapura constituency, pointed out that the medical college was approved by the previous coalition government for which land was allotted and preparations were on to perform 'Bhoomi Puje' (ground breaking).

He alleged the BJP government on coming to power decided to cancel it and transfer the same to Chikballapura. "I request you to immediately order restoration of the allotment of Medical College at Kanakapura and give a date for performing Bhoomi Puja. I may also bring to your notice that if your government's sole intention is to play vendetta politics, I will be constrained to resort to serious action in my own way to get justice to the people of Kanakapura for which, I hope, you will not give scope," Shivakumar said.

He noted that he was shocked to learn that the single- member cabinet of Yediyurappa soon after coming to power took a decision to cancel the medical college overnight and transfer/re-allot the same to Chikballapura. "I was totally dismayed that such a decision was taken by a person like you who made a promise in public that you would never resort to vendetta politics." "I would like to reiterate that I have no objection whatsoever for allotment of Medical College to Chikballapura.. but, my objection is to the cancellation of the Medical College allotted to Kanakapura that too when the establishment of it was at an advanced stage," he added.

Terming it as his "dream project," Shivakumar had earlier vowed to "lay down his life" for a medical college in Kanakapura.

Pointing to Yediyurappa's statement soon after coming to power that he would never resort to vengeful politics and never allow politics to play any role in administration in the development, Shivakumar said, the subsequent developments in the administration have clearly manifested that in reality it is totally different. However, he also claimed that Yediyurappa had recently stated about sanctioning a Medical College to Kanakapura and was enclosing a copy of the newspaper report in this connection with the letter.

Yediyurappa had recently said his government's plan was to have one medical college in each district and the decision to sanction medical colleges to taluk centres (like Kanakapura) will be taken only after such colleges come up in all districts.