Hyderabad, Jun 18: A 76-year-old city-based landlord and his wife, who were missing since June 12, were found to have been murdered near Humnabad in Karnatakaallegedly by their driver for the money and gold the couple were carrying. The decomposed bodies of P Navratan reddy (76) and Snehalata Reddy (72) were recovered on Sunday from Anantagiri Hills where it had been dumped a kilometre apart in the wee hours of July 13. Driver Satish and his accomplice Rahul were arrested on Monday and Rs 5 lakh and 25 tola gold seized from them. 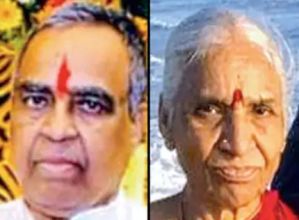 The murder came to light after the couple’s four US-based children didn’t receive any calls for several days and they alerted family members in the city who then approached cops. Reddy owned about 40 acres in Patancheru and over 55 acres in Humnabad (Bidar). He had been travelling frequently between Hyderabad and Humnabad to his rented place to oversee the development of his land. On the night of June 12 too Reddy and his wife had started from their home at BHEL in their Innova with driver Satish. The couple slept during the journey.

“Around 1am, when the car crossed Mannaekhelli toll plaza before Humnabad, Satish took a detour. He got off the main road and drove for about 100 metres to an isolated area where his friend Rahul was waiting. Reddy woke up when Satish stopped the car and got out of the vehicle. Both Satish and Rahul attacked him with an iron rod. By then, his wife had woken up and the duo attacked her too. The couple were then strangled with towels,” Humnabad sub-inspector LT Santosh Kumar said .

The duo took the cash and gold the couple had on them and drove through villages, bypassing toll plazas and reached Anantagiri Hills in Vikarabad district where the bodies were dumped.

The two then split, with Satish driving the Innova back to Reddy’s BHEL house. He cleaned up the interiors of the car, parked it and left the place.

As the couple, who used to call their US-based children at least 10 times a day, did not make any contact since June 12 night, family members grew suspicious.

“Their relatives approached us on June 13 night saying that the couple’s phones were switched off. Driver Satish had told the relatives that he had dropped them at home and left. We picked up Satish after he lied about his whereabouts. He confessed to having killed the couple with the help of a friend for the money,” SI Kumar said, adding that Rahul was arrested from Dhumnsur village near Humnabad.

The accused were produced before court in Humnabad on Monday.