Exit-polls are BJP’s attempt to create an impression of Modi Wave in the country: HDK 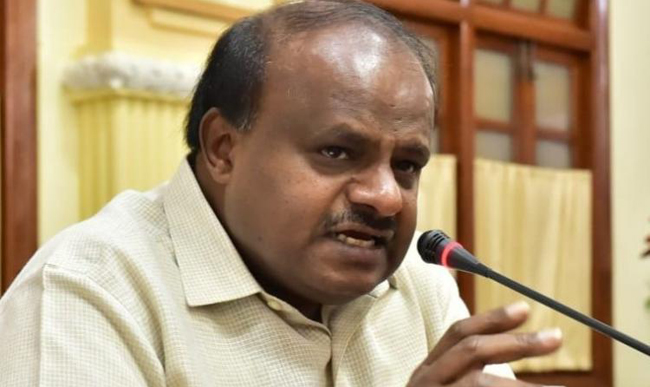 Bengaluru, May 20: With most exit polls forecasting another term for Prime Minister Narendra Modi and the BJP almost sweeping Karnataka in the Lok Sabha polls, chief minister H D Kumaraswamy Monday expressed concerns over the vulnerability of the Electronic Voting Machines (EVMs).

Hitting out at the pollsters, the chief minister in a series of tweets alleged that the "artificially engineered" or "manufactured" Modi wave is being used by the BJP to lure regional parties well in advance to fill any shortfall after the results on May 23.

"Entire Opposition political parties had expressed concern over the credibility of EVMs under PM @narendramodi's rule. Opposition parties even knocked the doors of the Supreme Court asking for a traditional ballot paper elections to avoid defective EVMs that are vulnerable to fraud," Kumaraswamy said.

"World wide, even developed countries have opted for traditional polls through paper ballets. The exit poll surveys on May 19 only reiterated the serious concern of the Opposition parties on misuse of vulnerable EVMs for electoral gains by the ruling party," he said in another tweet.

Stating that exit polls were being used to create an impression that "there is still a Modi wave" in the country, Kumaraswamy said, "This artificially engineered or manufactured Modi wave is being used by the BJP to lure regional parties well in advance to fill any shortfall after the results on May 23."

"The entire exit poll exercise was an effort to create a false impression of a wave in favour of one particular leader and the party. As they say, it is just an exit poll, not an exact poll," he added.

Most exit polls on Sunday predicted that the ruling Bharatiya Janata Party-led National Democratic Alliance will comfortably cross the halfway mark of 272 seats in the Lok Sabha.

Some even projected that the NDA will get more than 300 seats. Forecasting a big BJP win in Karnataka, the pollsters claimed that the saffron party was likely to win over 21 of the total 28 seats.

In the 2014 general election, the BJP had won 17 seats while the Congress and the JD(S) had bagged 9 and 2 seats each respectively. However, in the by-polls held in November last year, the BJP had lost the Ballari seat to the Congress.

Deputy Chief Minister G Parameshwara too raised doubts over the EVMs, saying that the BJP had sponsored the exit polls as the ground reality was different. He also noted that the United Progressive Alliance will come to power at the Centre this time.

Rajya Sabha member B K Hariprasad said the exit polls were the reflection of the wishes of news channels where Modi wave is prevalent.

"Most of the exit polls are the reflection of the wishes of news channels. There is a Modi wave in the news channels but the actual result will be out when the (ballot) boxes are opened," Hariprasad told reporters.

"They have shown BJP losing 40 to 45 seats in Uttar Pradesh. In the rest of the places, these channels tried to fill the void. Exit polls are not exact polls. We will get exact poll when the counting happens," he added.

However, Karnataka BJP president B S Yeddyurappa said people of the country as well as Karnataka have supported Modi and the exit polls giving 22 seats to the saffron party in the state was a proof of that.

Stressing that many tall leaders of Congress-JD(S) will lose, he said, "Let's see what will happen after May 23, fighting is on between Congress and JD(S) already, let's see where it will reach."

The Congress and the Janata Dal (Secular) leaders questioning the EVMs shows their desperation, he added.

Speculation is rife in the political circles that any adverse results for the Congress-JD(S) alliance in the polls will have its implications on the longevity of the Kumaraswamy-led government in Karnataka.

Exit-polls are BJP’s attempt to create an impression of Modi Wave in the country: HDK