Chikkamagaluru, Dec 1: Police have arrested four people, including a government doctor, on charges of exploiting an unmarried woman and forcibly taking away her newborn baby at Koppa in the District.

Police said the accused allegedly sold the baby to a couple for Rs 50,000. The incident came to light on Monday, when the Administrative Medical Officer of MSDM Public Hospital of Koppa filed a complaint with Koppa police.

The police have registered the case against Dr GS Balakrishna, Nurses A Reshma and Shobha and Premalatha, a resident of Sringeri, who allegedly took the baby.

The unmarried woman, a native of Thirthahalli in Shivamogga district, gave birth in a hospital on March 14.

Exploiting her situation, the Doctor and the staff allegedly forced her to leave the baby with them. The staff did not enter details of the delivery in hospital records.

Later, the staff handed over the baby to Premalatha, forging the documents including the birth certificate to show that she was the mother of the baby. Premalatha allegedly paid Rs 50,000 to the staff members, besides Rs 5,000 to the mother.

The woman who had been separated from her baby went into depression. During her stay in a non-governmental organisation in Shivamogga. She reportedly narrated the incident to the staff, who informed the officers of the Women and Child Development Department.

Based on the information received from the Child Welfare Committee and Child Protection Officer, BS Ganavi, Administrative Medical Officer of Koppa Hospital, filed the complaint.

The case has been registered under relevant sections of the IPC for exploitation, forgery, and criminal intimidation, besides the provisions under the Juvenile Justice (Care and Protection of Children) Act, 2015.
The police have taken up the investigation.

The baby is in the custody of the Child Welfare Committee in Chikkamagaluru. 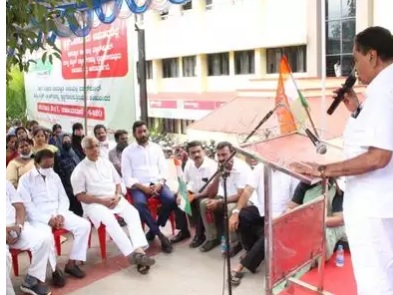 He was speaking at a protest organised by the Dakshina Kannada District Congress Committee (DCC) against the MSCL, MCC and the government on Tuesday.

“The MSCL has failed to implement the Smart City projects effectively and it has been stopped following high court direction. It is the inefficiency of the MCC council led by the BJP. They failed to convince the high court and present facts. The MSCL should have made provisions to dispose construction debris scientifically before commencing works. I had prepared an action plan for the disposal of construction debris when I was the urban development minister,” Khader said and demanded the MSCL to clear the legal hurdles for smart city works.

Noting the BJP that bagged majority in the MCC council is vision less, Khader said the voters of the city voted the party with the hopes of presenting a better administration. “Now people of Mangaluru are repenting for electing the BJP in the MCC council. They have no futuristic vision towards city’s development. Though the state government had earmarked Rs 125 crore for MCC in the 2019-2020 budget, the BJP government has not released it. Meanwhile, the BJP corporators and MLAs in the city have no courage to question the government,” he said adding that people in the city have been facing multiple issues related to roads and infrastructure.

On the protest against farm laws, Khader said that it should not be considered as an agitation of farmers alone. The new laws will allow capitalists to exploit farmers, he said and called upon party workers to launch protest in favour of farmers.

K Harish Kumar, MLC and DCC president, said the ministers, MLAs, corporators and mayors from the Congress were instrumental in various development works that were launched the city.

However, in BJP’s administration in the MCC, they have failed utterly even in the implementation of solid waste management. “They increased the water supply cess three times even when people were facing difficulties due to pandemic,” he added.