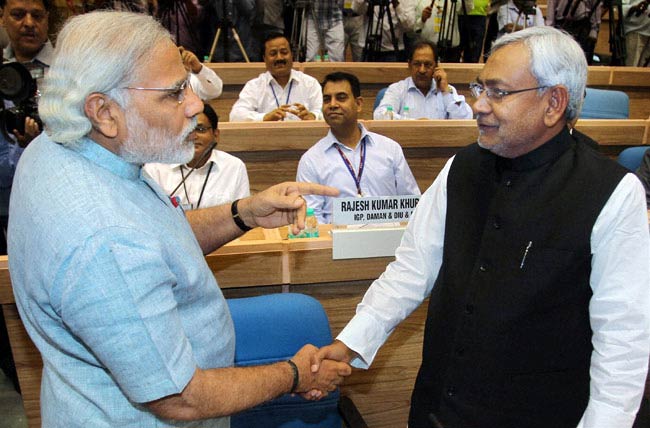 New Delhi, June 20: Making clear its aversion for Narendra Modi, JD(U) today virtually gave an ultimatum to BJP to desist from projecting the Gujarat chief minister as NDA's prime ministerial candidate or be ready to snap the alliance.

The warning was given by party general secretary Shivanand Tiwari, who said that NDA cannot come to power with a "fanatic face" and JD(U) will not compromise on principles on which it had joined the opposition alliance in 1996.

He said that surveys indicate that had the former Prime Minister Atal Behari Vajpayee dismissed Modi government in Gujarat for the post-Godhara riots in 2002, NDA would have still been in power and not lost the 2004 general elections.

"People who voted for BJP due to liberal face of Vajpayee went away from it after Gujarat riots and the floating votes went to Congress because people do not accept fanatic politics. Those people in BJP who want the party to come to power will have to realize that they cannot do it by putting a fanatic face in the front," Tiwari said in an apparent reference to Modi.

He said while Vajpayee had asked Modi to follow the 'Raj Dharma' and wanted the government to go, the move was "vetoed" by BJP leaders like LK Advani.

Yadav refused to answer questions on what was the sudden provocation for the Bihar Chief Minister to talk about NDA's prime ministerial candidate.

Shivanand Tiwari, however, said that there appears to be two lines of thinking in BJP today.

"One is that there is a need for a larger group like NDA if it wants to return to power as a government cannot be formed by propping up a fanatic face. The second line of thinking is to go back to its pre-1996 ideology.

"This is what is being reflected from the statement of the RSS chief. We want to tell Bhagwat that the country does not approve of this ideology and the BJP cannot form a government on the basis of such an ideology," Tiwari said.

"BJP had realised in 1996 itself that they cannot form a government in the country on the basis of their hardcore Hindutva agenda and, hence, NDA was formed after it agreed to drop the three contentious issues of Uniform Civil Code, withdrawal of Article 370 from Jammu and Kashmir and construction of Ram temple," Tewari said, maintaining that the changed stance had the backing of RSS.

Reacting to Tiwari's statement, BJP leader Balbir Punj said, "This is a needless controversy. Nobody has a right in this country to give fatwa as to who is secular and who is not. People have their opinions."

Another senior party leader in JD(U), speaking on the condition of anonymity, said Kumar's remarks for a "secular" NDA prime ministerial candidate reflects the larger sentiment in JD(U), which is uncomfortable with Modi's projection in BJP.

"At the same time, this is also a snub to the Gujarat chief minister, who a week ago blamed caste politics by leaders of Bihar and UP for the lack of development in these states," the leader said.