Bengaluru, Jun 12: Shivappa, a farmer from Sagar village in Yadgir district, was elated when his bank credited Rs 43,553 into his account in April in tune with chief minister HD Kumaraswamy’s pre-poll farm loan waiver promise. On June 3, he found the money had been debited from his account without clarification. 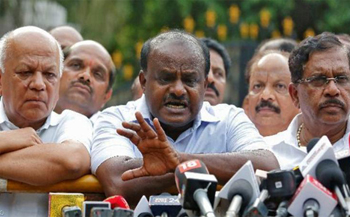 He was not alone. At least 13,988 farmers across Karnataka received a jolt after their banks took back the money they had deposited in the accounts towards the loan waiver. The farmers are now up in arms, alleging that the government deposited the money only to win votes and withdrew it after being trounced in the Lok Sabha polls.

The government denied the reports and said they were “mere lies and speculation” being spread by the opposition parties. Kumaraswamy said on Tuesday that the gaffe was committed by nationalised banks which are directly under the Centre’s control. The discrepancy came to light in an audit conducted by the state government and helped save crores of rupees, he said in a tweet.

“I’ve called a meeting with representatives of nationalised banks on June 14 to discuss this specific issue,” he added.

Munish Moudgil, commissioner of Survey, Settlement and Land Records who is overseeing the implementation of the waiver scheme, said the discrepancies occurred only in nationalised banks where 12 lakh farmers had applied for the loan waiver scheme.

Banks told to take back Rs 59.8 crore from ineligible farmers

After scrutiny of their applications, he said, the government released Rs 3,930 crore to 7.5 lakh eligible farmers as per data provided by the banks.

During an audit by an agency of the state government, it was found that the banks had deposited money in 13,988 accounts of ineligible farmers and were directed to recover Rs 59.8 crore. “The pre-audit work using the specially developed software helped track these discrepancies and save the state exchequer money which needs to be appreciated,’’ Moudgil said.