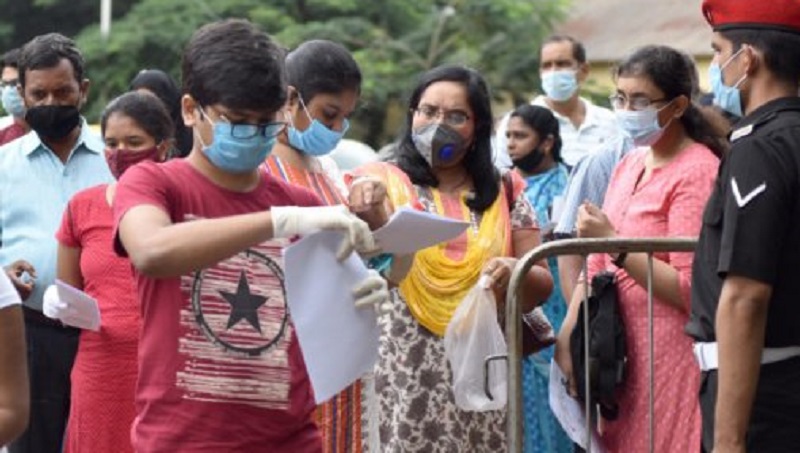 Bengaluru, Oct 10: A day after reports of 34 children in Belgavi district testing positive for Covid-19 emerged, the government of Karnataka has decided to stop the ambitious ‘Vidyagama’ scheme, albeit temporarily.

The scheme, a continuous learning plan for children in government and aided schools in the State, was launched by the Education Department around two months ago in the wake of the outbreak of COVID-19 pandemic.

However, since its launch, there has been widespread opposition from various quarters. Recently, communities in M. Thimmapur village near Ramdurg complained that 34 students had tested positive for COVID-19 over the past few days. They had alleged that students had contracted the virus while attending classes conducted by teachers in open public spaces as part of the ‘Vidyagama’ scheme.

Minister for Primary and Secondary Education S. Suresh Kumar announced that the officials of the department had been directed to stop implementing the scheme until a proper analysis of pros and cons is complete. He stated that the scheme was launched for the benefit of children belonging to lower socio-economic backgrounds.

Former Chief Minister H.D. Kumaraswamy has also been vocal in opposing the scheme. In a series of tweets, he alleged that the State government was risking the lives of both teachers and students.

Concurring, Basavaraj Gurikar, president of Karnataka State Primary School Teachers’ Association, said the scheme should be scrapped. “Nothing is more important than the health of children. The government should focus on health, rather than implement such schemes that only risk the lives of teachers and students,” he said.

Covid-19: Karnataka decides not to reopen schools till 2020 end

Bengaluru, Nov 23: The COVID-19 Technical Advisory Committee has recommended the Karnataka government against reopening schools in the state till December.

However, the State government is yet to take a call on this matter.

The schools in the State have remained shut since March due to the COVID-19 pandemic.

The Committee headed by M.K. Sudarshan met on Sunday and concluded that it was not advisable to reopen schools in the State before the number of COVID-19 cases were brought under control. Chief Minister B. S. Yediyurappa has scheduled a meeting with Primary and Secondary Education Minister S. Suresh Kumar and department officials on Monday.

The department of Primary and Secondary Education is likely to bat for reopening of schools particularly for students of classes X (Ten) and XII (Twelve) soon. While most private schools have begun online classes, learning for students belonging to government and aided schools has taken a hit during the pandemic.

The Covid-19 Technical Committee of the Health and Family Welfare Department has reportedly recommended the state government against the reopening of schools till next month citing a possible surge in the cases due to extreme winter conditions.

However, the committee expressed that the government may consider reopening schools towards the end of December by yet again holding a consultation meeting with all the stakeholders and reviewing the Covid-19 surge across Karnataka.

Even though the committee members expressed satisfaction over Covid-19 works taken up by the state government with increased testing and facilities at the hospitals, experts pointed at the sudden surge in the Covid-19 cases in New Delhi, Haryana, Gujarat and other states. Some of the members stated that the infection may gain momentum during the winter along with other respiratory ailments.

They had even recalled the findings of a survey that was carried out in September revealing a possible surge in Covid-19 cases in some of the districts. The committee keeping in mind all these factors collectively resolved to recommend the state government against the reopening of schools in December.

The State government had started the Vidyagama programme where teachers would visit neighbourhoods of students from government schools and conduct classes. This programme too was stopped in October after it was reported that students who had attended these classes had contracted the virus.

30 per cent reduction in PU syllabus due to pandemic

Bengaluru, Nov 23: The Pre-University Education Department has decided to reduce the syllabus by 30 per cent for the academic year due to delay in reopening of the Colleges following Covid-19.

The Department, in an order, has instructed that 30 per cent of syllabus of PU course be reduced for the academic year.

In the meantime, the public instruction department has constituted a panel of experts to further discuss reduction on the syllabus of Secondary School Leaving Certificate (SSLC) students. Officials said that the discussions are to determine a scientific reduction of the syllabus based on the remaining number of academic days. For the academic year 2020-21 only the months of December,. January, February and March remain.

No decision on school reopening has been taken yet.

The department of public instruction has been instructed to prepare a draft report by various subjects experts in the Department of Education Research and Training ( DSERT) on syllabus reduction based on the number of academic days available, official sources added.

Bengaluru, Dec 1: All Medical and Paramedical Colleges in Karnataka reopened on Tuesday after a gap of nine months during which they had remained shut due to the lockdown imposed for checking the transmission of the coronavirus.

The Karnataka government allowed the colleges to reopen provided they follow the safety guidelines without fail.
Dental, AYUSH, Nursing and Pharmacy Colleges have also been reopened from today onwards.

Besides the reopening of medical and paramedical colleges, the state government has already reopened the degree, diploma, and engineering colleges from November 17 onwards.

Karnataka Minister for Health and Medical Education, Dr K Sudhakar had ordered the opening of the medical colleges.

According to sources in the Directorate of medical education, all necessary precautions have been taken in the medical colleges such as usage of face masks, hand sanitisers, and maintaining physical distance.

The state government has asked the faculty, staff, and students to produce a negative RT-PCR test report to attend the classes. The medical colleges across the country have been reopened as per the order of the central government.