Kicked in the private part by stolen cow, thief dies on the spot 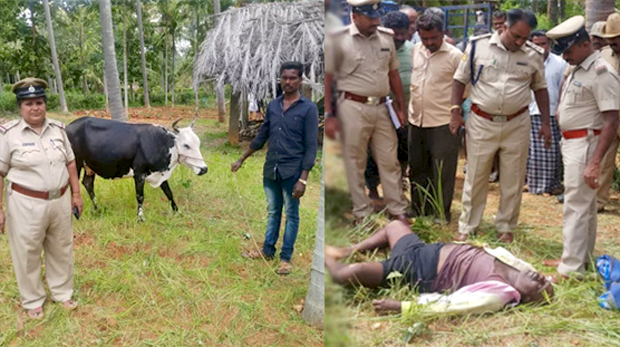 Hassan, Jun 25: In a bizarre incident, a man who was transporting a cow after stealing it was killed by the same cow at Appenahalli village of Channarayapatna taluk in Hassan district.

The deceased has been identified as Govindappa, a 50-year-old man from Tipatur in Tumakuru district. The police have confirmed that he had stolen the cow from a farm house. Rumours are doing rounds on social media that he was a Hindutva activist. However the police have not confirmed it.

According to postmortem report, Govindappa died on the spot when the cow kicked him in his private part in an apparent bid to escape from him.

The police said that Govindappa had already taken the cow two kilometers away and was about to transport it in a vehicle when the animal showed its presence of mind.

A case has been registered in this regard at jurisdictional Nuggehalli police station.

Kicked in the private part by stolen cow, thief dies on the spot

O really  I can't believe it cow  is power full

I am 100% confident that this cow matha thief is BD activist and this is their daily duty.   They steal cows and blames on muslims/christians.  In most of the cases stolen cows are transported to Gujrat beef exporting factories owned by Pandits/Brahmins with bjp leaders as partners.   this thief got just punishment from the cow itself, otherwise police would have said that he purchased the cow and was taking it home.

I am 100% confident that your father was actually a father in Church. Your love to Muslims is because of their love to your sister.

The cow was a PFI/SDPI worker, according to BJP leaders.