Bengaluru, May 11: In yet another setback to the ruling BJP, the resignation by senior IPS officer P Ravindranath protesting his transfer, has taken a political turn.

Former Chief Minister H D Kumaraswamy on Wednesday alleged that the ruling BJP and Opposition Congress have come together to finish off an upright Dalit IPS officer.

The senior IPS officer had been transferred within 10 days of issuance of notice to a retired IPS officer, who is facing an allegation of submission of a fake caste certificate. "This episode clearly shows that the ruling BJP is working under whose instructions," he charged without taking the name of Opposition leader Siddaramaiah.

Ravindranath had issued a notice to retired IPS officer Kempaiah, regarding allegations of submission of false caste certificate at the time of joining UPSC services. Kempaiah, worked as the advisor of the Home Department to former Chief Minister Siddaramaiah during his tenure as the CM.

P. Ravindranath, known as an upright officer, working as the DGP of Karnataka Police Training Academy had submitted his resignation recently.

The move by the ruling BJP government to transfer him from the post at a crucial juncture of inquiry of Kempaiah led to suspicions.

Kumaraswamy further stated that there was an internal understanding between the ruling BJP and the Congress. This is a conspiracy to finish off an honest Dalit IPS officer, he charged.

Kumaraswamy while stressing that his resignation should not be accepted, stated that he had submitted resignation in the backdrop of the state government obstructing his duty and then transferring him.

"Ravindranath was trying to catch those who had submitted fake caste certificates and gotten into public service, committing a fraud to the government and society.

"What is the necessity for the BJP to support a retired IPS officer close to Opposition leader. Is it a sort of paying back for helping the BJP to attain power?" Kumaraswamy asked.

Kumaraswamy underlined that the development is a great threat to honest officers in the state.

The JD(S) has all along been making the allegation that Siddaramaiah helped the BJP to attain power by ensuring the collapse of JD(S) and the Congress coalition government in Karnataka. However, Siddaramaiah has vehemently denied this.

Ravindranath resigned Tuesday alleging harassment and caste vendetta. In his resignation letter, he wrote, "I am pained to observe the opacity shown by Karnataka Chief Secretary P. Ravikumar when I requested him to issue government order to set up protection cell as per rules of SC and ST (Prevention of Atrocities) Rules 1995.

"I am prematurely transferred without any public interest just to harass me since I have taken legal action against people involved in the fake caste certificate issue." 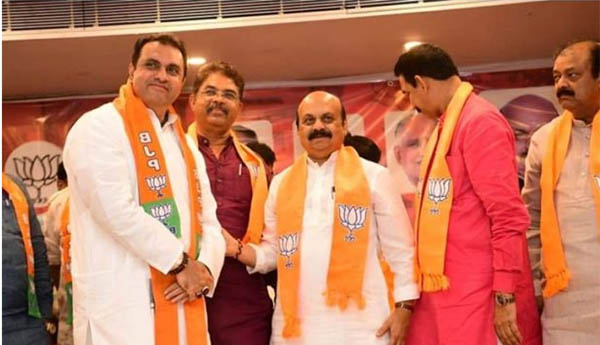 Mr Madhwaraj, who had lost to BJP’s Raghupati Bhat in Udupi constituency in last assembly polls, was inducted into the saffron party in the presence of chief minister Basawaraj Bommai, Karnataka BJP chief Nalin Kumar Kateel among others in Bengaluru.

The mogaveera stalwart had kept himself aloof from the party activities after his poll debacle. There were rumours that he would join BJP. However, until yesterday, he had been refusing the reports of his migration to the saffron party.

Meanwhile, several state and central leaders of the Congress had reportedly tried to convince Madhwaraj to stay in the party and had assured higher position. He was also made the vice president of KPCC very recently.