The April 27 event witnessed by over 700 music loving Kannadigas of UAE. 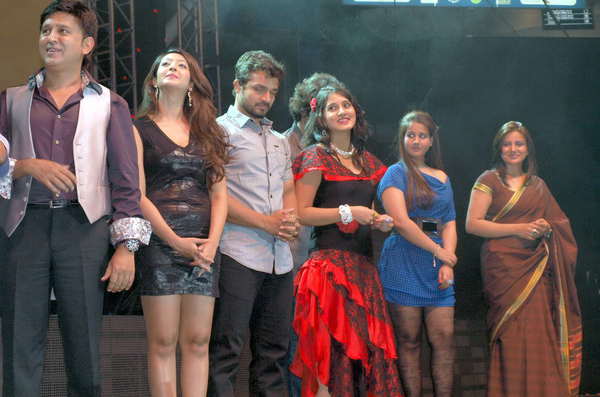 Though the actual programme started at around 8:40pm everyone could hear the stars speaking from the stage back ground from 7:30 pm onwards that they are getting ready to present the show after the prayers.

This initially kept the audience connected and when Ramesh Arvind came on live with his beautiful inaugural speech it really touched the hearts of all the Kannadigas who cheered applauding continuously.

Mr Arvind who completed 25 years of his acting career in Kannada Films was felicitated and honoured with 'Mysore Peta' and shawl by the organiser Prasad and the main sponsors.

Moreover the dances performed by the local talents 'Ocean Kids' Group were really superb though they were given just one day rehearsal by visiting Choreographer Harsha. One more thing to be praised is the orchestra comprising of Deva and his troupe of only 3 musicians created a sound effect of fully fledged troupe.

The flow of the programme went smoothly one after another with great performances by all the current hot Star cast of Kannada 'Sandalwood' film industry who were really down to earth personalities without any head weights mingled with the UAE audiences just like a common person. In between the programme were comedy skits by Bank Janardhan, Tennis Krishna & Sadhu Kokila who presented some humorous rib tickling comedy items which added spice to the programme. But the best person who came on with various roles spontaneously was Arun Sagar a brilliant personality with mind blowing script flowing like sea as his name mentions.

Chilly Willy released their energy drink in between the show to all the stars and later distributed to the audience.

On the whole the programme was one of its kind ever presented in UAE for quite some time. The organisers praised the media representative for the success of the programme and promised more programmes in the future. Those who could not attend this event really lost a chance of being part of a good magical theme based programme liked and loved by those who were present connected like 'abhimanigale devru' well said in the concluding part of the programme.