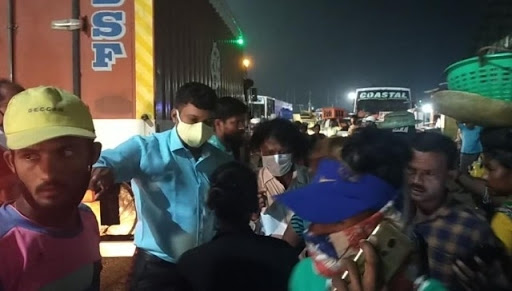 Udupi, Oct 29: As many as 17 children who were engaged in the work of picking fish at the Malpe port were rescued by a team on Thursday.

The rescued children hailed from Bellary and Koppal District and were produced before the Child Welfare Committee.

Mangaluru, Jul 19: Inter-state bus operation between Mangaluru and Kasaragod to resume on Monday after a gap of more than four months.

However, the Dakshina Kannada district administration has set certain conditions for the passengers travelling between the two states.

Passengers travelling in both KSRTC and private buses should have received at least one dose of the Covid vaccine or furnish covid negative report which is less than 72 hours old.

The bus conductors should enforce this before allowing passengers to board the bus.

Further, they have to ensure that the passengers adhere to all Covid protocols like wearing face masks and maintaining social distance.

Those who violate these rules will be booked under the Karnataka Epidemic Diseases Act-2020 and Disaster Management Act-2005, said Deputy Commissioner KV Rajendra in a press statement.

The DC said the decision to resume the buses was taken after analysing the Covid situation in Kerala state and in the interest of a huge number of people who commute between the two border districts daily for education, office work, business and other reasons.

He appealed to people to take all necessary precautions in order to check the spread of the virus and to manage the third wave of covid-19 which is expected to hit in the coming days.

Bengaluru, July 15: The months-long surge in the prices of petrol and diesel across the country continued on Thursday amid protests in various states.

In Karnataka’s capital Bengaluru, petrol is priced at Rs 104.94 and diesel at Rs 95.26 per litre. In Mangaluru and Udupi too the petrol prices are nearing Rs 105.

Petrol price was up 35 paise in the national capital while the price of diesel was up 15 paise, according to a price notification by the Indian Oil Corporation.

After petrol, diesel rates in major cities have also neared the Rs 100-a-litre-mark. The price of petrol in Delhi stood at Rs 101.54 per litre, while diesel now costs Rs 89.87 per litre.

In Mumbai, the first of the metros to hit the three-digit mark, the price of petrol has gone up to Rs 107.54 per litre and diesel in the financial capital costs Rs 97.45.

Fuel prices differ from state to state depending on the incidence of local taxes such as value-added tax (VAT) and freight charges.

Oil companies revise rates of petrol and diesel daily based on the average price of benchmark fuel in the international market in the preceding 15 days, and foreign exchange rates.

Bengaluru, July 15: Defending former Chief Minister Siddaramaiah's administration, KPCC President D K Shivakumar stated that the Congress leader had implemented 95% of the promises made in the party's manifesto during the assembly polls and thus remained true to words. "Let state BJP President come for a debate on this," he dared.

He was reacting to state BJP President Nalin Kumar Kateel's allegations on Siddaramaiah's administration on Thursday. He said that Siddaramaiah, who took charge as chief minister on Basava Jayanti, had fulfilled most promises made during the polls and he had given good administration. "But musical chair contest is going on for the chief mister post within BJP," he taunted.

Referring to the fuel price hike, he said the party staged the first phase of protest against it recently. "Common people would suffer further if the price is not reduced.  The discussions on the next level of agitation are going on at the national level," he said. He added that he would hold a meeting with state leaders soon, and also made it clear that the party would intensify its agitation.