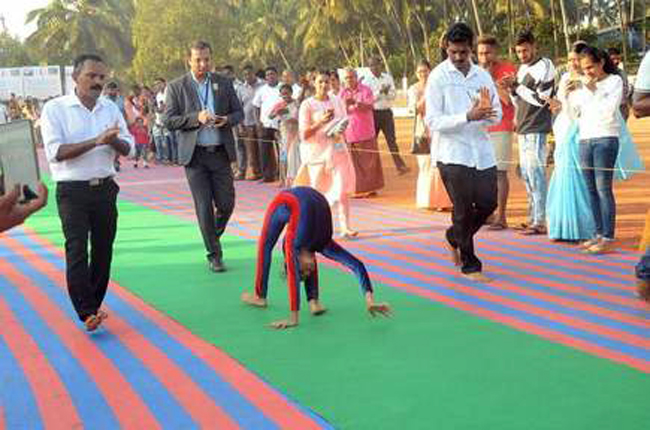 Udupi, Feb 23: Tanushree Pithrody, a 10-year-old girl from Udyavar and class 6 student of St Cecily’s School, here and a Guinness World Record holder, erased the old record by covering the 100 metres 'Chakrasana race' in one minute 14 seconds to write her name in the Golden Book of World Records.

This was announced by Manish Bishnoi, Head, Golden Book of World Records, who handed over the Certificate to Ms Tanushree, who was accompanied by her father Uday Kumar and mother Sandhya here on Saturday.

The previous record-holder in this category was Samiksha Dogra [11 years and 1 month] from Rampur Bhushar, Himachal Pradesh, who had set a time of 6 minutes and 2 seconds on June14,2018.

Later speaking to scribes here, Ms Tanushree said that she was delighted that she was able to break the record. “When I was practicing, I used to finish it in around 2 minutes. This is my fifth record. I dedicate my success to my parents and my Yoga guru,”she added.