Will launch hunger strike if Hindus or Muslims resort to violence over Babri verdict: Pejawar seer 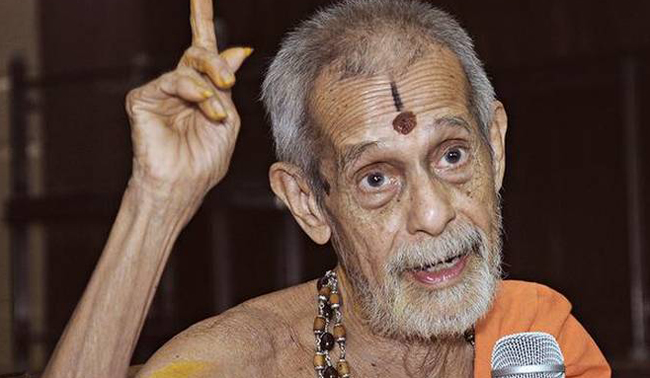 Udupi, Nov 8: Vishwesha Teertha Swami, the chief pontiff Pejawar mutt and one of the pioneers of Ram Mandir movement, has warned both Hindus and Muslims that he would launch an indefinite hunger strike if any of them held victory procession or resorted to violence after Supreme Court’s looming verdict on Babri Masjid land.

The 88-year-old seer that sants, Sangh Parivar and Vishwa Hindu Parishat had decided not to celebrate the verdict. "Instead, welcome the apex court's verdict by offering poojas and bhajans in temples," he stressed.

He appealed to all to abide by the Constitution and not indulge in violence. He quoted Sri Sri Ravishankar, who had assured him that the negotiation with leaders from the Muslim community was fruitful and they had not opposed the construction of Ram Mandir on the disputed land.

He recollected that the then government led by V P Singh had arranged a meeting in New Delhi. Prominent leaders from both communities present in the meeting had decided on the construction of the temple. But all efforts turned futile when BJP leader L K Advani was arrested in Bihar and BJP withdrew its support to the Singh government.

The seer said even if the apex court's verdict was not in favour of Hindus, they would work out other possibilities to fulfil the dream of constructing the Ram Mandir. The plan to construct the Mandir would be chalked out after the SC verdict, he said.

Will launch hunger strike if Hindus or Muslims resort to violence over Babri verdict: Pejawar seer