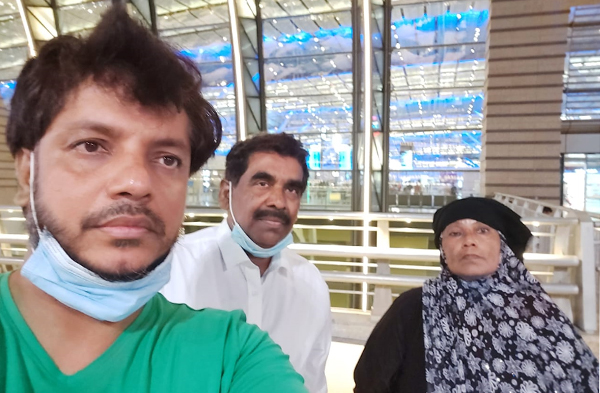 After around three months of consistent efforts, Mrs Sabiha, one of the two distressed women from Karnataka who were tortured by their sponsor for a prolonged period, finally touched down in India on Thursday July 22. She originally hails from Tumakuru district of Karnataka.

All the legal formalities were completed about 10 days ago at Jawazaath in Jeddah Semaishi. However, due to the ticket issue that was supposed to be provided by the CGI Jeddah under ICWF provision, her departure was bit delayed. Even in the end, after repeated requests, she was not provided with the ticket by the CGI Jeddah putting the burden on the woman, who was already in the tight spot and penniless due to her sponsor's harassment and duping. Even after the persistent requests, the CGI had denied the ticket for her.

Meanwhile, a businessman and philanthropist Mr Mustaq Ahmed Bengaluru in Jubail came forward voluntarily to sponsor the flight ticket for her after knowing her distressed and helpless situation.

The earliest flight directly to India (Cochin) from Jeddah was on July 22, so the ticket was sponsored to book the flight on the date to fly to Cochin.

At last, Sabiha reached her destination and breathed a sigh of relief after going through pains meted out against her by her sponsor, Saad Rahil Mukhlef Al-Anaizi based in Al Qurayath, northern part of Saudi Arabia, bordering to Jordan.

Sabiha arrived in the KSA three years ago in 2018 on visit visa arranged by agents in Bengaluru and Mumbai under the sponsorship of Saad Al-Anaizi whom the agents know very well. She didn't know even the status of her visa as a visit (for 90 days), which doesn't allow her to work in the KSA as per the visit visa rule. Either it should have been renewed for a further period of time or visitor should have left the country before the visa expiry. But, either of the processes were not done by the sponsor and she was forced to work as a housemaid at his house.

She faced her first problem from her Sponsor when she was sent to another family's house to work as a housemaid. She was hesitant to go there, but she was compelled to do so. After sometimes, she came back to her sponsor's house, where she continued to work helplessly even after the passing of 2years.

Due to this, she had to face severe tortures at his hands, she was neither allowed to go to India nor go outside of the sponsor's confined home despite of her repeated & consistent requests nor given salaries for about 9 months.

She contacted Riyadh-based pro bono lawyer and social worker Adv. P.A. Hameed Padubidri for help through Mrs. Fairoza Banu, who was another woman, who was victimized by the same sponsor for the help.

Firstly, Adv. P.A.Hameed tried to resolve the case through mutual talks with the sponsor, but it failed. He then took up the case with the Saudi Human Rights Commission (HRC) in AlJouf branch & Ministry of External Affairs, Delhi & the Indian Embassy in Riyadh.

By taking up the case immediately on the list in May, 2021, the HRC contacted Adv. Padubidri to gather more details & background of the case. The HRC then forwarded the complaint to the concerned authorities  including police station in AlQurayath.The Embassy also involved based on the complaint & trailing communique of the MoEA, Delhi.

With the intervention of all these agencies including Jawazaath (Directorate of Passport Dept), her sponsor agreed to send her together with Mrs. Fairoza Banu Dawanagere to India. He was also fined heavily for violating the visa rule of the KSA.

However, Sabiha was duped by her sponsor sending her to Jeddah Intl. Airport with invalid dummy ticket that too without final exit document after getting her signature in the bus station at AlQurayath as if she had received all outstanding salaries & no dues from him although it's unpaid.

When she reached the Jeddah airport, she came to know that she was mercilessly cheated by him. Finally, she landed at seeking the help of Indian Consulate (CGI) in Jeddah & remained there under the shelter of the CGI for one month until all the legal processes were facilitated by the authorities & she reached Jeddah airport on 22/07/2021 at 4am (Saudi time) to board the flight to India at 8am.

She reached Cochin Airport on Thursday at 5.30 pm (IST) & she touched down her home place in Tumakuru, around 80 kms away from Bengaluru & now she joined with her family.

With this, now both the ladies reached their respective home places in Karnataka with the great efforts of Adv. Padubidri with the supports of other two social workers in the KSA.

Adv. Padubidri expressed his immense amounts of thanks to AlQurayath- based social worker, Saleem Kodangalluru- Kerala, Dammam-based Social worker & senior resident, Yaseen Gulbarga for their very supports & constant cooperations since the day one.

Lots of respect to all who helped to woman reach her home... especially Mushtaq Ahmed Bangalore who sponsored free ticket to the woman...lots of respect and big salute musthaq Ahmed