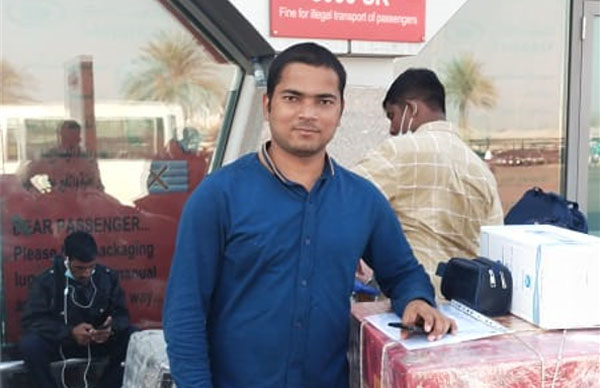 Shahebe Aalam Shamsuddin, from Gorakhpur, UP, was working as a waiter for a catering company in Jeddah since more than two years. During his employment with the company, he suddenly fell sick. Despite of the sickness, he continued to work in the company.

Meanwhile, his Iqama (residency permit) got expired, but not renewed by the company. Despite of his repeated requests, the company didn't renew his Iqama. He rquested for the renewal of the Iqama, but no use. He told the company "either renew the Iqama or send me on final exit...".

It was already 11 months since his residency permit got expired. Neither he was sent on exit nor the Iqama was renewed. The company was just giving him false promises that he would be sent to India soon, but there was no any progress about his matter. Besides, the company started harrasing & threatening him in several ways by keeping him in a confined room.

Finally, he contacted Saudi Arabia's Riyadh-based lawyer and social worker, Adv.P.A.HameedPadubidri for the help. He gave him proper legal advices and advised him to approach the  Consulate General of India (CGI) based in Jeddah. Also suggested him to file a case in labor court requesting for the final exit.

Accordingly, he approached the CGI in Jeddah. He filed a case in September 2021 with the assistance of the CGI & Adv. P.A.HameedPadubidri in Makkah Labor court. His case in the court was listed in Case No. 21 for the hearing. After the two hearings, the court ordered the company to endorse the final exit visa immediately.

Upon receiving the court order, the company sent him on final exit to India on Nov. 11. He reached his home happily on Nov.12 & joined his family.

He thanked Adv. PAH Padubidri & CGI especially its consular general H.E. Shahid IFS & other staffs in the CGI throughout the legal fight & finalization.

@ Hameed Padubidre,
Thanking for your Humanity work we are great full to you for the good advice and support. Keep your good work continue for the society.