'NRI infected with coronavirus in UAE is now stable'

Dubai, Feb 13: An Indian expatriate found to be infected with coronavirus in the UAE on February 10 is in a stable condition, the Indian Embassy told Gulf News.

“The Indian is a 36-year-old male,” an embassy official said, adding “he a resident of the UAE”.

However, the official did not say if the man had any travel history to China and also refused to divulge which state he hailed from.

On February 10, the Ministry of Health said the Indian national was found infected with coronavirus in the latest such case in the UAE. “The Indian national had interacted with a recently diagnosed person,” the ministry had said in a statement.

"All reported cases are in stable condition, except for one case, who is being put under close observation by a team of senior consultants at the Intensive Care Unit," added the statement.

The man is among the eight cases of coronavirus detected in the UAE so far. Others include six Chinese nationals and one from Philippines.

Earlier this week, the UAE announced that one of the infected patients, a 73-year-old Chinese national, Liu Yujia, had recovered. 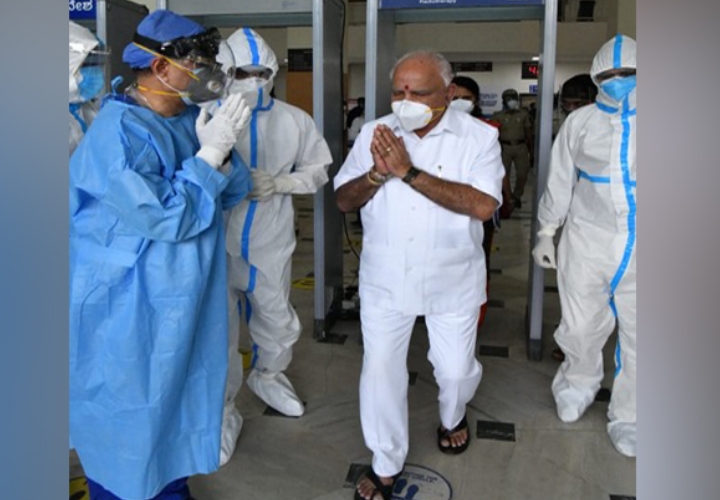 Bengaluru, Aug 10: Karnataka Chief Minister BS Yediyurappa, has recovered from Covid-19 on Monday and has been discharged from hospital in Bengaluru here where he was admitted after testing positive for COVID-19.

"The Chief Minister of Karnataka BS Yediyurappa was discharged from Manipal Hospitals today evening following his clinical recovery and as per guidelines.

He has responded well to treatment and at discharge, he was comfortable and asymptomatic. His vital parameters were stable. He is advised home quarantine and follow up as per guidelines," Director of the Manipal Hospitals, Dr Manish Rai said in a statement.
Yediyurappa tweeted his gratitude to doctors, nurses and staff who treated him. at the hospital.

"Thank you, everyone, for your wishes and prayers. I have been discharged from the hospital and will be in self-quarantine. Grateful for your affection and support. I look forward to getting back to the routine very soon," the 77 year old said in a tweet.

Bengaluru, Jul 19: Three legislators of the opposition Congress in Karnataka, including 2 MLAs and 1 MLC tested positive for coronavirus and are under treatment, a party official said on Saturday.

"Our Bailhongal MLA Mahantesh Koujalgi in Belagavi district and Humnabad MLA Rajashekhar Patil and his MLC brother Chandrashekhar Patil in Bidar district tested positive for the infection and are under treatment at designated hospitals," party spokesman Ravi Gowda told media persons in Bangaluru.

Koujalgi's swab sample was taken on Friday after he showed signs of illness and its result turned positive earlier in the day.

"As Koujalgi attended a review meeting at Bailhongal, about 20 officials who participated in the meeting have been home quarantined," said Gowda.

Koujalgi is the second lawmaker in the state's northwest region to test positive after BJP's Belagavi North assembly segment MLA Anik Benake tested positive for the virus on July 15.

"Patil brothers were in self quarantine after meeting BJP's Bidar Lok Sabha member Bhagwanth Khuba, who tested positive on Wednesday. Their tests also showed they were infected with the virus," Gowda said.

Congress MLC Sandesh Nagaraj, who tested positive on Friday, is under treatment at a private hospital in Mysuru.

Dakshina Kannada district Youth Congress president Mithun Rai is in institutional quarantine in Bengaluru after he tested positive for the infection.

They include the bride and the groom. Collector D Sajith Babu has asked all those who attended the wedding to go into home quarantine for 14 days. Those with Covid symptoms should get in touch with the nearest primary health centre, he said.

The collector said those taking part in funeral or weddings without following the Covid protocol would be booked under the Kerala Epidemic Diseases Act. If convicted, they would face up to two years of rigorous imprisonment and a fine of `10,000. Kasaragod police said they will register a case in connection with the wedding.

Pilankatta ward member Abdulla Kunhi K B said it was not a big fat wedding. The ceremony held at the bride’s house at Pilankatta was attended by less than 100 people, he said.“Theirs is a big family with four houses in one compound.

As many as 30 members are staying in these houses,” said Kunhi. Nine of the 30 have tested positive.Of the 15 guests, who came from the bride’s mother’s house, 12 contracted the infection. “The rest of the infected persons were among the groom’s guests,” said Kunhi, who did not attend the wedding. The groom and the bride’s father returned from Dubai three months ago.

1,049: state records biggest recovery
A total of 1,049 Covid patients recovered on Saturday. This is the first time that the number of recoveries crossed the 1,000-mark in the state. The previous highest was 968 reported on Friday. So far, as many as 8,613 patients have recovered.

roping in ayush experts a challenge
Plan to bring AYUSH practitioners for treating positive patients at CFLTCs is going to be a challenge for the government. It turned out that respective associations were planning to approach the government with an individual charter of demands.