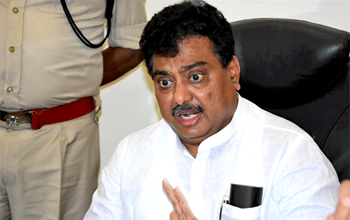 Shocked over the fake later dating back to 2017, which was in his name, Mr Patil filed a police complaint against the miscreants. "This letter is FAKE. I will be initiating legal action for forgery against those who produced and published it. BJP's desperation is evident. They are wholly relying on fake letters because they have lost the support of people," he tweeted.

This letter is FAKE

I will be initiating legal action for forgery against those who produced and published it.

BJP's desperation is evident. They are wholly relying on fake letters because they have lost the support of people. pic.twitter.com/yrPRHGTVcW

A picture of the letter was posted on the BJP’s Twitter page after a Kannada daily, run by a BJP leader, carried a full-page feature based on the letter, which is attributed to the BLDE Association (of which Mr. Patil is chairman) to mislead people. The letter had gone viral when Mr. Patil, who was then the Water Resources Minister, was leading the Lingayat religion movement.

After it surfaced again on Tuesday, Mr. Patil held a press conference in Vijayapura and said it was completely fabricated. He told presspersons that the same letter had been circulated on social media in 2017 in an attempt to defame him. “At the time, I did not take the letter seriously because I thought some mischievous elements might have done it. But now, I will not keep quiet as it has become a major source of spreading canards against me. I will file a complaint and get the cybercrime police investigate the matter and find the truth,” he said. “I am not a person who needs religion for my politics. I believe in Lingayatism and those beliefs made me fight for the separate religion [status]. I don’t need to stoop to this cheap level for political gains.”

The Home Minister also said he would not rest until the case had met its logical end. He then visited the Adarsha Nagar police station in Vijayapura and filed a complaint.

The alleged fake letter seeks the permission and blessings of Ms. Gandhi for “dividing Hindus” as Lingayats and Veerashaivas. The letter also states that Mr. Patil had held a meeting with his Cabinet colleagues and contacted Muslims and Christian organisations, seeking their support to win the general elections in 2019.

A copy of this letter was posted first by the web portal Post Card in the run-up to the 2018 Assembly elections. It was subsequently removed, with the portal saying its authenticity could not be verified.

"Officials have informed that they are all set to conduct exams on July 30 and 31. We will put this matter in front of the high court. As per the instructions of the high court, we will move forward," said Ashwathnarayan.

This comes after Karnataka High court asked the state government to reconsider the decision of conducting the CET exam.

"...I had called an emergency meeting with district collectors, officials of education, transport, health, police department. And, I took information about the preparedness for conducting the CET exam," he added.

Karnataka CET Exam is a state-level entrance exam organised for providing admissions in Engineering, Pharmacy, B Pharma and other courses offered by colleges and institutions located in the state.

"I request you to grant two acres of land in Ayodhya for this purpose," he said.

The Chief Minister said the yatri nivas will be constructed for the benefit of pilgrims from the southern state.

He also congratulated the Uttar Pradesh Chief Minister for successfully laying the foundation stone for the Ram temple on Wednesday.

Our ruling govt is only interested in RAM Mandir and spending crores of rupees for the temple. Why the other community is not demanding fund from the GOVT?

Not bothered about the development of the country as currently we have no idea how to tackle the corona viurs. Ministers are keen on builing Guest house for pilgrims, Statue of RAM etc etc.

Please concentrate on how to minimise the Virus issue in KARNAKATA like other Gulf countries.

For Ayodhya pilgrims, Spend from your BJP looted money.

Chennai, July 25: A widow living alone in her apartment in Chennai city suburbs has filed a police complaint against ABVP national president Dr Subbiah Shanmugam, accusing him of harassment, including urinating and throwing used surgical masks at her doorstep.

Shockingly, no action has been taken so far by the police, even though the complaint against Dr Shanmugam, who is in government service, was filed on July 11 at the Adambakkam Police Station here by the widow’s relative Balaji Vijayaraghavan.

Dr Shanmugam and the 62-year-old widow were living in the same apartment complex in Nanganallur and an argument broke between them over a parking slot. “He wanted to use our parking lot. We agreed but demanded a nominal charge for using it. He was outraged by our demand and even broke our signboard at the parking lot,” Vijayaraghavan wrote in his complaint.

He also alleged that Dr Shanmugam began harassing her by throwing “pieces of chicken” outside her apartment despite knowing she is a vegetarian. Vijayaraghavan also alleged in his two-page written complaint that the ABVP National President had urinated outside the woman’s apartment gate and had been throwing garbage and used masks at her gate.

The 62-year-old woman has been living alone in her apartment for the last year following her husband’s death. In his complaint, Vijayaraghavan also said the family was “concerned about her safety”, while asking police to take action against Dr Shanmugam, who he says, “has a bad track record in maintaining rapport with neighbours.”

CCTV footage corroborates with the allegations of urinating outside the residence of the widow. However, the ABVP claimed the incident as a “malicious and derogatory propaganda” by the Congress’ student wing of NSUI.