The administration said permission had been cancelled after "objections" from residents and warned that if similar "objections" were raised at other prayer sites, "permission will not be given there too".

"Consent from the administration is necessary for namaz in any public and open place," Gurgaon authorities said, adding, "If local people have objections at other places also, permission will not be given to offer namaz there too."

Four of the eight sites are Bengali Basti (Sector 49), Block V of DLF Phase 3, Surat Nagar Phase 1 and an area near the DLF Square Tower on Jacaranda Marg.

The others are on the outskirts of the Kherki Majra and Daulatabad villages, near the Ramgarh village in Sector 68, and an area between Rampur village and Nakhrola Road.

Namaz can be offered, the administration said, at mosques or Eidgah (or open-air prayer sites), or at a private or designated site, of which there are now only 29.

The administration did say, however, that a committee constituted by Gurgaon Deputy Commissioner Yash Garg would hold discussions on identifying places to offer namaz.

The committee consists of a Sub Divisional Magistrate, an Assistant Commissioner of Police and members of both religious organisations and civil society groups, and will work towards resolving the issue and ensuring local residents do not face any problem in offering prayers.

The committee will also ensure namaz is not offered on roads or public place, and that consent is taken from locals at the time of designating a spot for offering prayers.

The administration has also called upon religious communities to maintain law and order; extensive security arrangements have been made by the police in this regard, it said.

On several occasions over the past few weeks, residents of some Gurgaon neighborhoods and members of right-wing groups have protested against Friday namaz at public grounds.

"Locals staged a protest against Friday namaz at a ground in Sector 47 for the fourth consecutive week by performing puja. Efforts are ongoing for a solution, including finding an alternate place for namaz," ACP Aman Yadav had said.

"Earlier also two rounds (of talks) were held under the chairmanship of the Sub Divisional Magistrate (Badshahpur). We are making efforts to find a solution and resolve the issue amicably," he added.

Sector 47 residents had claimed the ground in question had only been offered for one day.

"The residents have shown us the list which was issued three years ago. We have to verify the list from our end also. If the ground had given to Muslim community for a single day, then the administration will take necessary action," ACP Yadav said.

Bhagavad Gita, Upanishads, other Hindu texts part of Sanskrit syllabus of this Islamic Institute in Kerala 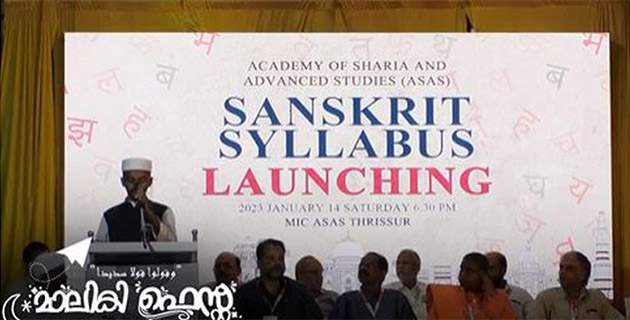 Basic Sanskrit grammar in class 11 and 12 and then Bhagavad Gita as well as other Hindu texts in the 'Deva Bhasha' in subsequent years of study is the structured syllabus prepared for its students by an Islamic institute in Kerala's Thrissur district.

The new syllabus will come into operation from June 2023 when the new academic year starts. The Academy of Sharia and Advanced Studies (ASAS) run by Malik Deenar Islamic Complex (MIC) was in the news recently for setting an example by teaching Sanskrit, also known as 'Deva Bhasha', to its students with the help of Hindu scholars. The decision, to come out with a structured syllabus to teach the ancient and classical language, was taken to inculcate in the students, knowledge and awareness about other religions, the institute said.

The MIC ASAS was teaching its students selective portions of the Bhagavad Gita, Upanishads, Mahabharata, Ramayana in Sanskrit for the last seven years. Hafiz Aboobacker, one of the coordinators at the institute, told PTI that the earlier Sanskrit syllabus was not very detailed. The latest one is a syllabus for a eight-year course starting from plus two till post graduation, he said.

The students will now also have the option to opt for a degree or post-graduate course in Sanskrit, Aboobacker said. He said the syllabus was a joint effort of Dr C M Neelakandan -- a retired professor of Sanskrit Literature from the Sree Sankaracharya University of Sanskrit -- and Dr Shamseer P C -- assistant professor, department of Sanskrit, Kerala University. The idea was not to just teach them a language, but to also familiarise students with these ancient Hindu texts so that they understand religion and can make informed decisions for themselves, he said.

"It will also help to build secular and democratic ideas among students," he said. According to the latest syllabus, in plus two, the students would be familiarised with basic grammar, words, declensions, gender, number and sentence construction in Sanskrit. After that, during the first two years of their undergraduate studies, they would be taught Mahakavya, basic grammar, Sanskrit drama, computer, Sanskrit stotra, grammar, prose and Tarkasamgraha -- a treatise in Sanskrit giving a foundational exposition of the ancient Indian system of logic and reasoning.

In the final year, Bhagavad Gita, translation and Sankhya would be taught to students, according to the syllabus shared by the institute. During post-graduation, syllabus would include Vedic Suktas, Vedantasara, Dramaturgy, Upanishads, Natyasastra, yoga, Bhasa study and Book review, it said. The institution is primarily a Sharia college where other languages, like Urdu and English are also taught besides a degree course in Arts as it is affiliated to Calicut University. 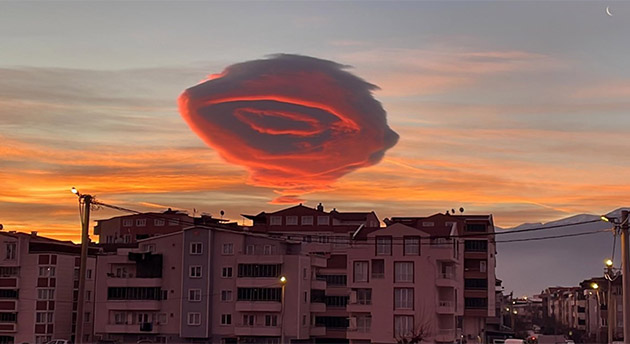 A rare cloud formation resembling an unidentified flying object (UFO) was spotted floating over Bursa, Turkey, on Thursday (January 19) morning. According to The Guardian, the almost circular cloud, known as a lenticular cloud, remained intact for about an hour. Several internet users captured the rare phenomena on their phones. It appeared at sunrise and featured a large hole in the middle.

"#Turkey an unusual dawn this morning. Footage of a rare natural phenomenon called #UFO lenticular/spying foehn clouds," one user wrote while sharing images and video of the UFO-like cloud.

The videos and images of the bizarre-looking cloud have gone viral across the world. Hundreds of social media users said that the cloud looked like a UFO. However, Turkey's state Meteorological Serviced reportedly explained that the rare phenomenon was simply a "lenticular cloud".

According to The Guardian, lenticular clouds are known for their curved, flying saucer-like appearance. They are usually found at heights between 2,000 and 5,000 meters.

As per Fox News, lenticular clouds are formed when the layer of the atmosphere is just on the cusp of saturation, meaning they are formed as a result of strong wind fluctuations over hills and mountains when the air is stable and moist. They most often form in winter, but it is still possible to see them at other times of the year.

These types of clouds can be a signal of precipitation within the next day or so as the atmosphere moistens ahead of the incoming storm.

In this case, a weak cold front was approaching western Turkey on Thursday. Bursa also lies at the base of a mountain range, which makes the phenomenon more likely. 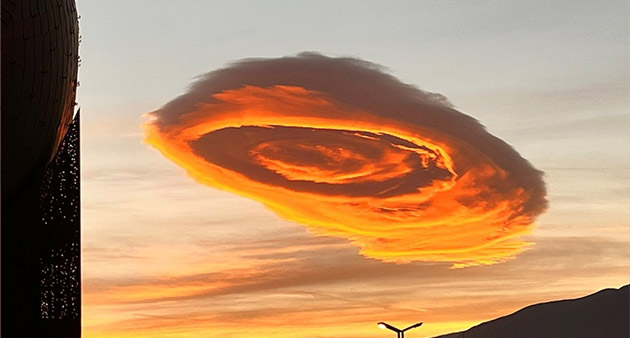