The All India Catholic Union has called upon the Prime Minister and the Home Minister of India to take exemplary action against the vigilante group and the police involved in the harassment of two Sacred Heart Nuns and two student Nuns in a moving train near Jhansi. In Uttar Pradesh. The police, instead of warding off and arresting the men, instead forced the women off the train, and took them to the police station.

Two of the women are from Kerala. The chief minister of Kerala has also written to the Central government on the issue. The Union Home Minister, Mr Amit Shah, who was campaigning in Kerala, said the criminals “will be brought to justice.’ 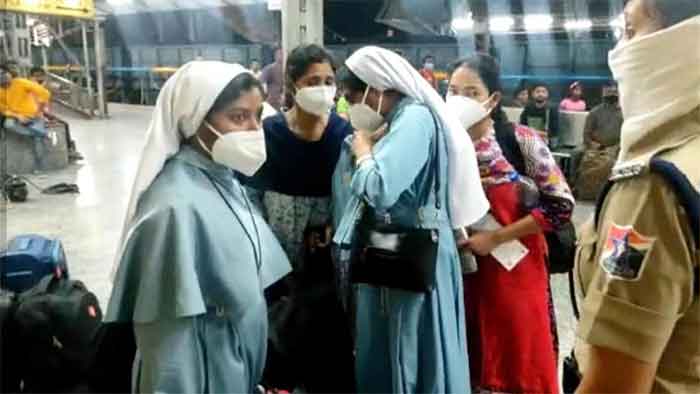 The following is the full text of the AICU’s letter

Re: Harassment of Nuns in train in Uttar Pradesh by vigilantes
Dear Sir

Greetings from the All India Catholic Union [AICU].

AICU, the 101 year old Laity movement in the country, thanks you for assuring that the culprits who harassed four Nuns during their train journey via Jhansi in Uttar Pradesh this week will be brought to justice at the earliest. Although you made the assurance to the people of Kerala where you were campaigning in the state assembly elections, we hope the assurance is to the entire community in India which has been shocked by the vigilante persecution of religious women of the community in public transport with the active participation of policemen.

Such incidents, you will agree, bring India to shame in the eyes of the world and prompt United Nations and other international human rights groups to mention them in their reports.

We hope the government of India has written strongly to the chief minister of Uttar Pradesh as also to the Union Railways minister in whose jurisdiction this crime took place. There is no place in any civilised and tolerant democracy for such vigilante harassment.

As you know, the Christian community the world over is currently observing the holy season of Lent which will conclude with Good Friday, marking the crucifixion of Jesus Christ about two millennium ago in Jerusalem, and then His Resurrection three days later on Easter, which this year falls on 4th April. That such incidents take place at all is a matter of deep concern, and that such targeted hate amounting to violence and gender harassment happen now is extremely alarming and of great concern.

As has been brought to your notice, two nuns and two postulants [trainee sisters] of the Sacred Hearts Congregation of Delhi Province were forced to get off a train by the Railway police in Jhansi after a group of men in the train, who claimed to be working for the “Hindu Samaj” accosted them in the moving train. They accused the sisters of trying forceful conversion. This was a blatant lie. The young women were going home for Easter holidays and the seniors accompanied them for safety. The video, which has gone viral, shows the men started chanting Jai Shriram and Jai Hanuman accusing the Sisters of conversions. The 19-year-old students repeatedly told them that they are Christians, showing their identity proof, but the men would not leave them.

The police who came showed little respect for the law of the land, and instead of restraining the men, forced the nuns to get down at the Jhansi railway station. At the railway platform, more than 150 men surrounded the sisters, shouting slogans. The nuns were taken to the police station and the mob followed them shouting slogans.

We expect the Honourable Prime Minister of India, and you, to assure the minority communities in the country that vigilante groups will not be allowed a free hand in terrorising helpless people who cannot defend themselves. We also expect that the police forces of the states and particularly those in the control of the Central will be cautioned they will invite severe disciplinary action if seen abetting such crimes, or remaining bystanders when self-appointed vigilantes take the law in their own hands.