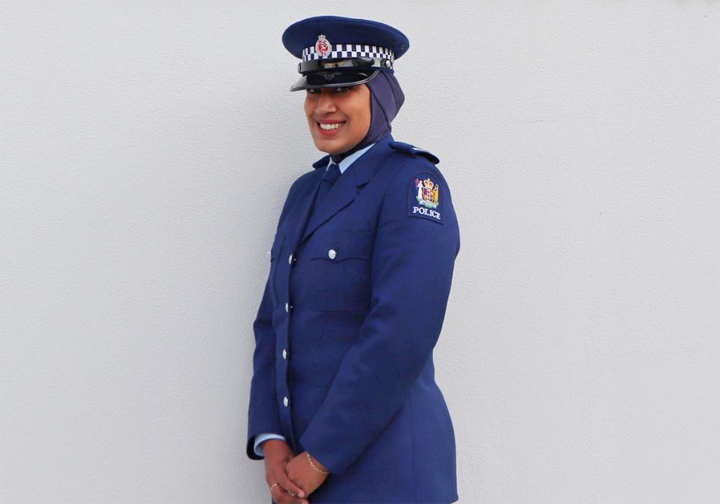 Zeena, 30, was inspired to join the police to help her Muslim community after the Christchurch terror attack last year in which 51 people were killed at two mosques in New Zealand.

This week she will not only graduate as a police officer, but will become the first in New Zealand to don a police-issued hijab as part of her uniform, the New Zealand Herald reported.

Zeena has worked with police to design a garment that is both functional for her new role and considerate of her religion, it said.

“It feels great to be able to go out and show the New Zealand Police uniform hijab because I was able to take part in the design process,” she said, adding that she was “proud” to represent her community – particularly women.

Zeena believes that the move will encourage other women to apply to the force as well.

“Having a police-branded hijab means women, who may not have previously considered policing, can do so now. It’s great how the police incorporated my religion and culture,” she said.

Born in Fiji, Zeena moved to New Zealand with her family when she was a child.

She appreciated police for considering her personal needs – both at the Police College and in her role going forward.

“At college they had a prayer room and halal meals. When I had to go swimming, they were ok with me wearing long sleeves,” Zeena said.

“We need more Muslim women to help in the community, most of them are too scared to talk to the police and would probably shut the front door if a man turned up to talk to them. If we have more women turning up, a more diverse front line, then we can reduce more crime,” she said.

Valuing diversity is one of the six core values for New Zealand Police – alongside professionalism, respect, integrity, empathy and commitment to Maori and the Treaty of Waitangi, the report said.

“We recognise the value different perspectives and experiences bring to making us better at what we do,” New Zealand Police said.

“We need people with a range of skills, backgrounds and experience levels – diversity is essential so that we can effectively serve the needs of New Zealand’s communities now and in the future,” it said.

In 2008, New Zealand Police introduced a turban into the uniform, and Nelson Constable Jagmohan Malhi became the first officer to wear it on duty. Until then he had to forgo the turban on duty, despite it being an important part of his Sikh faith.

In the UK, the Metropolitan Police in London approved a uniform hijab in 2006 with Police Scotland following in 2016. In Australia, Maha Sukkar of Victoria Police wore a hijab in 2004, BBC said in a report.