Agra, Nov 4: RSS chief Mohan Bhagwat advocated treading the path of Israel and Japan while serving the cause of nationalism, saying that these countries had risen from the ashes to become two of the strongest nations of the world. 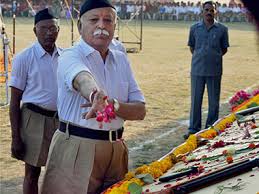 Addressing the closing session of 'Yuva Sankalp Shivir' (Youth pledge camp) at Astha city on the Agra-Mathura highway, he gave examples of the two countries that were strongly nationalists and let the world in development.

Bhagawat said India could learn much from the two countries with regard to the idea of strong nationalism and progress.

He said that Japan, which had been devastated in the second world war, rose from the ashes to become one of the strongest industrial power in the world.

The same was the case with Israel, which developed itself through commitment to self dependence and nationalism.

Bhagwat said that in country as diverse as India with multiplicity of languages and ways of living, the RSS was acting as binding force.

Praising Prime Minister Narendra Modi for initiating the cleanness drive, Bhagwat said it was small things like the 'Swachcha Bharat Abhiyan' that made a difference.

Hundreds of youth attended the three-day camp which was addressed among others by Rajyavardhan Singh Rathore, MP from Ghaziabad and Anand Kumar founder of Super 50.

Bhagwat had yesterday addressed non-RSS youth and invited them to "see, understand and then form a an opinion about the outfit".