Karnataka CM sanctions Rs 50 crore for emergencies due to rainfall

Meet Ullal’s own Beary Rapper who takes on communal politics 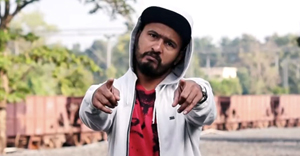 With sarcastic overtones on communalism, divisive politics and fake news, this Mangaluru-based Beary rapper’s potshots on issues and concerns is a force to be reckoned with. Mustafa Ullal, a 33-year-old rapper and a father of two has garnered 12,000 subscribers on his YouTube channel.

A hip-hop freak, as he calls himself, YemZii discovered his talent for rapping ‘by accident’. Back in 2015, he had recorded ‘Idadee Zohra’ a Beary language song he had written to the beats of rap legend Eminem’s ‘Cleanin Out my Closet’. The humorous song received wide appreciation from his friends and relatives, making him consider recording a music video and starting his own YouTube channel. He chose ‘YemZii’ as his Rap name, which does not have any accurate meaning but at the same time cannot be associated with any religion.

In his early years, YemZii developed a craze for hip-hop but did not have the means to pursue his dream. “I am an introvert, and used to be shy. About four years ago, when was diagnosed with a chronic health issue, I thought my end was near. Although I was cured of it, during the time I was undergoing treatment, my perspective towards life changed. I let go of my materialistic endeavours and started to pursue my creative interests,” YemZii recalls.

Taking his creativity to the next level, YemZii began writing poems on social realities with a hint of humour. His sarcastic take on issues has gained him popularity among locals.

“When I sit down to write, I think of issues around me such as politics, fake news and communal hatred and I write the lyrics based on my experiences. I was apprehensive initially, as I thought that talking on social issues could be a turn-off but then I realised that if I bring in an element of humour, people can connect with it,” he said.

YemZii says that during the course of his life, he has been at the receiving end of communal hatred, which led him to change his various perspectives. YemZii recalls the time his family lived in a Hindu dominated area in Udupi all their life but had to move to Ullal when communal tensions escalated in the coastal districts.

However, in 2006, he was apprehended by the police during a riot. “I had never stepped into a police station when I lived in Udupi. Life was peaceful. When we moved, I thought I can live in peace without all the hatred but I was arrested for no fault of mine,” he says. “Instances such as these make me question, ponder and these perspectives reflect in my songs” YemZii adds.

Having written over 40 songs, the rapper says he has to be careful with each word in a place like Mangaluru, where tensions run high. To his fortune, he had only received appreciation so far and nothing untoward had happened.

YemZii’s Kannada rap songs ‘Saavide’ which reminds people that death awaits everyone and ‘Vote Kode’ are sarcastic takes on politicians who have various agendas to come to power. The track ‘Gulf Poi Bara’ - a Beary song speaks of the struggles of people who migrate to the gulf.

YemZii’s recent hit, ‘Khalli Walli’ where he collaborated with local rapper ‘Rapzin’, who writes in Urdu, has garnered lakhs of views. The song speaks of communal harmony and is a touching take on what would matter most to people if they had only four days to live.

“Rap can explore many topics and it is not about alcohol and girls as many people think. Many rappers start with sarcastic takes on social realities but ultimately end up singing about bling lifestyles when big labels sign them and demand them to do the same,” YemZii says.

Dreaming of making it big, YemZii says he wants to stick to his style of rapping. “I have a sustainable lifestyle, where I earn money by designing websites. My wife is supportive and we make sure that our children are not deprived of anything. But rapping is something I do for myself,” he says.

At the onset of general elections, YemZii that he has about 25 more songs in the pipeline, awaiting release.

Meet Ullal’s own Beary Rapper who takes on communal politics