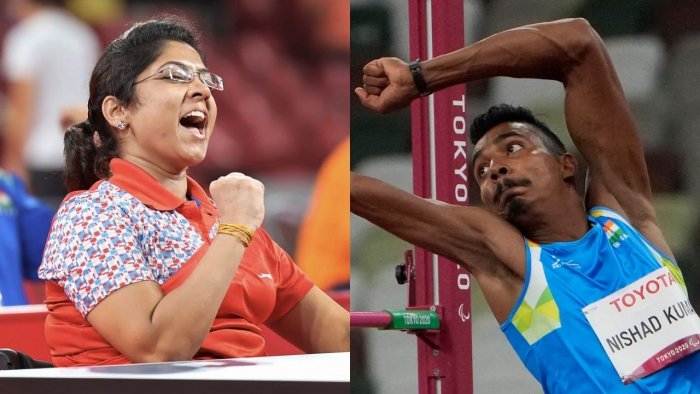 Bhavinaben Patel clinched a historic silver in table tennis to give India its first medal in Paralympics before high jumper Nishad Kumar also came second but the celebrations of a Super Sunday were somewhat muted after discus thrower Vinod Kumar's bronze-winning result was put on hold due to a protest over his disability classification.

Patel, who was diagnosed with polio when she was 12 months old, became only the second Indian woman to win a medal at the Paralympics after she signed off with a silver following a 0-3 loss to world number one Chinese paddler Ying Zhou in the women's singles table tennis class 4 final.

Nishad then clinched a silver with an Asian record before discus thrower Vinod fetched a bronze which was put on hold after a protest over his disability classification as India began collecting what is expected to be an unprecedented haul of athletics medals in the Games.

It somewhat marred the upbeat mood in the Indian camp on the National Sports Day, which is the birth anniversary of hockey wizard Major Dhyan Chand.

Vinod's classification in F52, which is for athletes with impaired muscle power, restricted range of movement, limb deficiency or leg length difference, was done on August 22 by the organisers.

It was not clear on what grounds the classification has been challenged.

"Results of this event are currently under review due to classification observation in competition. The Victory Ceremony has been postponed to the evening session of 30th August," read a statement from the Games organisers.

India's Chef de Mission Gursharan Singh told PTI that Vinod's medal stands for now till a decision on the matter by the technical officials likely to come on Monday.

But the day began brightly, with the 34-year-old Patel clinching a silver. She lost 7-11 5-11 6-11 loss to Zhou, a two-time gold medallist, in the women's singles summit clash which lasted 19 minutes.

Deepa Malik, who is the current president of Paralympic Committee of India (PCI), was the first Indian woman to win a medal in the Paralympic Games when she had claimed a silver in shotput at Rio five years back.

Patel, a wheelchair-bound player with an indomitable spirit, had suffered a loss to Zhou, one of the most decorated para-paddlers of China, in her first group stage match earlier in the week.

Patel started playing the sport 13 years ago at the Blind People's Association at Vastrapur area of Ahmedabad where she was a student of ITI for people with disabilities.

There, she saw visually impaired children playing table tennis and decided to take up the sport.

Patel hoped her success will help change the perception of people towards disability and create more opportunities.

"What I went through growing up, I don't want the next generation of people with disability to suffer," she said.

"Accessibility is a major issue and so is jobs and other opportunities. If my medal can somehow make the right noise and get people at the helm of affairs to be heard, I will be more than happy.

The 21-year-old Nishad, who is a farmer's son in Himachal Pradesh's Amb town, cleared 2.06m to win the silver in T47 class before 41-year-old BSF man Vinod, whose father fought in the 1971 Indo-Pakistan war, produced a best throw of 19.91m to clinch a bronze.

The 24-member Indian athletics team is hoping for a rich haul of medals -- at least 10 -- and the double success on Sunday gave the country enough reasons to smile on the National Sports Day.

Nishad, whose right hand got cut by a grass-cutting machine at his family's farm when he was an eight-year-old boy, cleared the same height of 2.06m with American Dallas Wise who was also awarded a silver.

Another American, Roderick Townsend, won the gold with a world record jump of 2.15m.

The second Indian in the fray, Ram Pal, finished fifth with a best jump of 1.94m.

T47 class is meant for athletes with a unilateral upper limb impairment resulting in some loss of function at the shoulder, elbow and wrist.

Nishad had also contracted Covid-19 earlier this year while training at the SAI Centre in Bengaluru.

Nishad had won a gold medal in the men's high jump T46/47 event at the Fazza World Para Athletics Grand Prix in Dubai earlier this year. He began competing in para athletics in 2009.

In Vinod's event, Piotr Kosewicz (20.02m) of Poland and Velimir Sandor (19.98m) of Croatia won the gold and silver respectively.

Vinod injured his legs while training after joining the BSF, falling off a cliff in Leh that left him bed-ridden for close to a decade during which he lost both his parents.

In archery, the Indian challenge ended in the compound mixed pair open section after the duo of Rakesh Kumar and Jyoti Baliyan made a quarterfinal exit.

The sixth seeded duo suffered a poor start mis-firing in the 6-ring in the first end that proved to be decisive as they lost to their Turkish opponents Oznur Cure and Bulent Korkmaz by 151-153 in an intriguing contest.

Earlier in the morning, the Indian duo stormed past Thailand's Anon Aungaphinan and Praphaporn Homjanthuek 147-141.

Indian challenge also ended in the women's compound open section where the lone challenger Jyoti lost to Kerrie-Louise Leonard of Ireland 141-137 in the first round.

The medal rush is expected to continue on Monday with star javelin thrower Devendra Jhajharia, gunning for his third gold, leading the charge.

Ghaziabad, Sept 10: Journalist Rana Ayyub has been booked by the Ghaziabad police on charges of money laundering and misappropriating donations meant for Covid patients and flood victims in some eastern states.

Other charges that journalist Ayyub faces are the criminal breach of trust and cheating by using computer resources under the Information Technology Act.

The FIR was lodged earlier this week on Tuesday on the complaint of Vikas Pandey, founder of an NGO “Hindu IT Cell.”

The police will take further legal action against the journalist only after investigating the case and finding evidence against her, city Superintendent of Police Gyanendra Singh said.

Ayyub’s name also figures in a recent case of circulation of a video in which a 72-year-old Bulandshahr resident had accused four men of beating him up and chopping his beard to force him to chant Jai Shri Ram.

The Ghaziabad police had, however, later found that the communal allegations made by the elderly Muslim man were false and he had made them on the instigation of a Samajwadi Party worker.

WHAT ABOUT OTHER TOP BRASS FROM BJP WHO HAD NEVER GIVEN SINGLE RS. STATEMENT OF THE FUNDS COLLECTED FOR COVID SINCE BEGINNING... WHAT POLICE DONT DARE TO FILE CASE ON THEM......

Separate classrooms for men and women in Afghanistan: Taliban

Kabul, Sept 12: The higher education minister in the new Taliban government says women will study in universities, including at post-graduate levels, but that classrooms will be gender-segregated and that Islamic dress is compulsory.

Haqqani said female university students would be required to wear a hijab but did not elaborate on whether this only meant a compulsory headscarf or also mandatory face coverings.