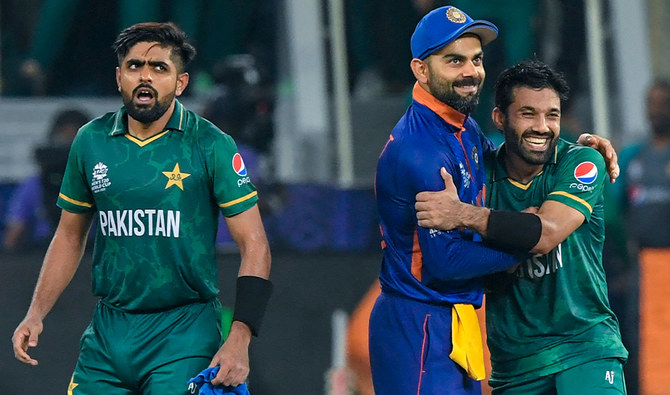 Dubai, Oct 27: Matthew Hayden has been impressed by the “sporting brotherhood” on display after Pakistan beat India to break their run of 12 losses in World Cup contests between the arch-rivals.

“The thing that inspired me the most out of the performance was the fantastic sporting brotherhood,” Hayden, an intensely competitive former Australia opening batsman now working with the Pakistan’s T20 squad, said in a video message from Dubai.

The political tension between the subcontinental neighbours has resulted in the countries avoiding bilateral cricket series since Pakistan visited India in 2012-13 and played a short limited-overs series. However, they compete against each other regularly in the ICC tournaments.

Hayden said the way the Pakistan and Indian players came together was a good example “of how we should treat each other as people.”

“That’s the role of sport, so it’s beautiful to see those moments where MS Dhoni is holding court with a few of the (Pakistan) players and Virat Kohli and (Rizwan), you know, in brotherhood, joining hands after there was heated battles in the middle.”

The Pakistan Cricket Board appointed Hayden as a batting consultant and South African Vernon Philander as a bowling consultant for the T20 World Cup after head coach Misbah-ul-Haq and bowling coach Waqar Younis stepped down.

Hayden joined the squad in the UAE, following his stint as a commentator in the Indian Premier League which ended two days before the World Cup began on October 17

Following Pakistan’s record-breaking win, Babar reminded his teammates to stay focused on winning the World Cup instead of getting carried away with the win over India.

Fast bowler Shaheen Afridi’s burst in his opening two overs provided Pakistan with the key wickets of Rohit Sharma and KL Rahul and helped restrict India to 151-7. Afridi also went on to take the wicket of top-scorer Kohli in his return spell.

For Hayden, it was a prime example of what Pakistan’s pacemen are capable of producing.

“Pakistan has velocity in abundance, not just here but also back home that aren’t celebrating in this World Cup,” he said. “Shaheen really is that one leader within the bowling group ... nothing beats velocity, mixed up with some skill.”

New Delhi, Dec 1: The government on Wednesday decided not to resume scheduled international flights from December 15, less than a week after announcing the decision in the wake of rising concerns over the Covid variant Omicron.

Aviation watchdog DGCA said the effective date for resumption of scheduled commercial international passenger services will be notified in due course. Scheduled international flights remain suspended since March 23, 2020, due to the coronavirus pandemic.

In a circular on Wednesday, DGCA said that in view of the evolving global scenario with the emergence of new Variants of Concern, the situation is being watched closely in consultation with all stakeholders.

"...an appropriate decision indicating the effective date of resumption of scheduled commercial international passenger services shall be notified in due course," the Directorate General of Civil Aviation (DGCA) said.

The watchdog also referred to its circular issued on November 26 wherein it was decided that scheduled international flights will resume from December 15.

On November 28, a day after the Prime Minister's directions regarding the easing of international travel curbs, the government had said the decision to resume the services will be reviewed.

While no cases of Omicron have been reported in India so far, the authorities have put in place stricter norms for international passengers.

On November 29, Civil Aviation Minister Jyotiraditya Scindia said the situation was being closely monitored and reviewed in consultation with other ministries regarding "any further decision" on resuming scheduled international passenger services.

In a written reply to the Rajya Sabha, Scindia had said the decision to resume the flights from December 15 was taken after recognising the increased vaccination coverage across the globe, changing nature of the pandemic and considering the health protocols, which have been put in place for international arrivals.

"However, in view of the evolving global scenario with the emergence of new variants of concern, the situation is being closely monitored and reviewed in consultation with other Ministries, with regard to taking any further decision on the issue," the minister had said.

Currently, international passenger flights are being operated under bilateral air bubble arrangements with various countries in a restricted manner.

As of November 24, India had formalised air bubble arrangements with 31 countries.