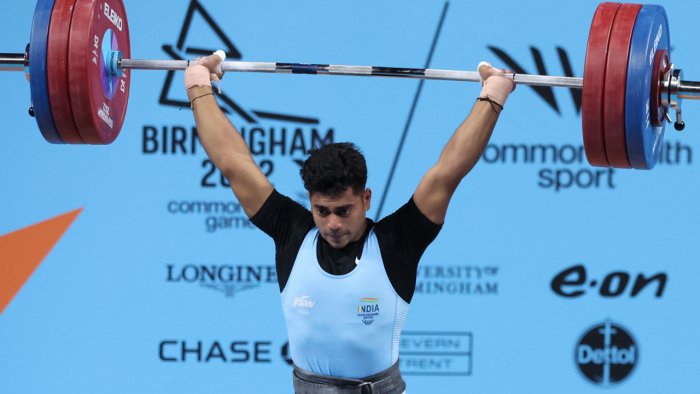 Birmingham, July 9: Weightlifter Achinta Sheuli (73kg) lived up to his top billing as he clinched India's third gold in the Commonwealth Games here.

Favourite to win the event, debutant Sheuli heaved 313kg (143kg+170kg) to grab the gold at NEC Hall here on Sunday.

Malaysia's Erry Hidayat Muhammad, who gave Sheuli a tough competition, ended as the second best lifter in the event. He had a best effort of 303kg (138kg+165kg).

His 143kg effort helped him smash the Games record and improve his personal best.

Heading into clean an jerk with a five kilogram advantage, the Kolkata lifter started with a 166kg lift, which he hoisted easily.

Sheuli then faltered his 170kg attempt only to heave the weight in the third attempt and create a new Games record in total lift (313kg).

The Indian lifter had to wait patiently towards the end to find out what medal he'd take home as the Malaysian attempted a 176kg lift in his last two attempts only to fail.

With the gold from Sheuli, the Indian weightlifting contingent has bagged its sixth medal of the Games.

Mangaluru, Nov 30: Acclaimed Yakshagana and Talamaddale artiste and former MLA Kumble Sundar Rao passed away in the wee hours of Wednesday. He was 88.

Rao was an exponent of Thenkuthittu style of Yakshagana and the MLA serving Surathkal (present Mangalore City North) constituency from 1994 to 1999.

As an artiste, he had served in Surathkal and Dharmasthala yakshagana mela. Known for distinct style of dialogue delivery, he had carved a niche for himself in the performance art Yakshagana.

He is survived by his wife, two sons and three daughters. The mortal remains of Sundar Rao will be kept for public to pay tributes at his residence near Pumpwell in Mangaluru. 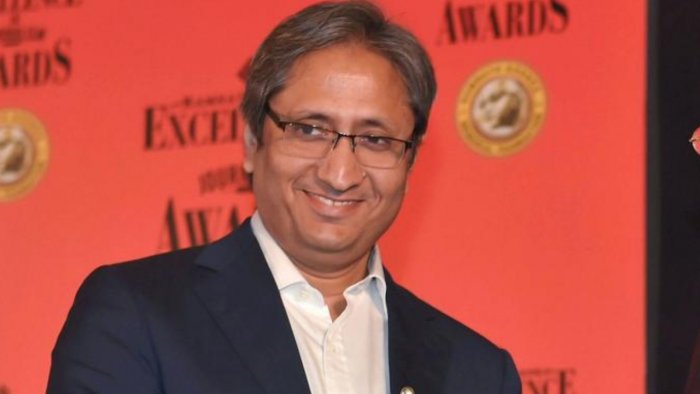 Newsroom, Nov 30: Senior journalist Ravish Kumar on Wednesday quit NDTV, a day after the channel’s founders and promoters Prannoy Roy and Radhika Roy resigned as directors on the board of RRPR Holding Private Limited (RRPRH).

In an announcement through an internal mail within the channel, NDTV said that the resignation was effective immediately.

Suparna Singh, president, NDTV Group said, “Few journalists have impacted people as much as Ravish. This reflects in the immense feedback about him; in the crowds he draws everywhere; in the prestigious awards and recognition he has received, within India and internationally; and in his daily reports, which champion the rights and needs of those who are under-served.”

Ravish has been an integral part of NDTV for decades, Suparna said, adding that his contribution has been immense, and “we know he will be hugely successful as he embarks on a new beginning”.

Kumar, a winner of the Ramon Magsaysay award, used to host a number of programs including the channel’s flagship weekday show Hum Log, Ravish ki Report, Des Ki Baat, and Prime Time. He has also been conferred with the Ramnath Goenka Excellence in Journalism Award twice.

This move came after the Gautam Adani-led Adani Group, a conglomerate with diverse business interests, acquired 29.18 per cent stake in television channel NDTV Ltd on August 23 and said it would launch an open offer as required by the Securities and Exchange Board of India (SEBI) to buy another 26 per cent in the company. On November 22, the Adani Group launched its open offer, which is to remain open until December 5, 2022. 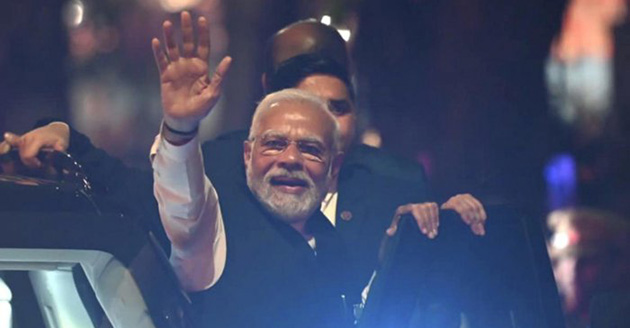 Kutch, Nov 28: The BJP is confident of maintaining its winning streak in Kutch district in Gujarat Assembly polls even as the Congress is carrying out a silent campaign in rural areas and the Aam Aadmi Party is setting the stage for a three-cornered fight by throwing its hat in the ring.

The All India Majlis-E-Ittehadul Muslimeen (AIMIM) is contesting in two minority-dominated seats. Kutch, which goes to polls in the first phase on December 1, has six Assembly constituencies - Abdasa, Bhuj, Rapar- all bordering Pakistan, and Mandvi, Anjar and Gandhidham.

Although Dalits, Kshatriyas, Kolis, Brahmins, and Rajputs have been the committed voters of the saffron camp for the last two decades, a large section of the Patels, who have been with the BJP till 2012, went against the saffron camp following the 2015 Patidar agitation.

The Congress, on the other hand, has been the first choice of minorities and also for a section of Patels, Kshatriyas in rural areas, and other smaller communities like the Rabari.

The AAP, which has carried out a campaign blitzkrieg in the arid region with Delhi Chief Minister Arvind Kejriwal conducting a Tiranga Yatra in Kutch, is stressing fundamental issues such as education, health and water.

The AIMIM stresses the development poll plank of minorities in the area. The Bharatiya Janata Party, which has been winning a majority of the six seats in the Kutch district since 2002, is hopeful of making a clean sweep this time riding on both development plank and divided opposition.

"We are confident of making a clean sweep this time. There is no opposition to BJP as the people are with us for the development we had carried out post-earthquake in 2001," Kutch district media-in-charge Satwik Gadhvi told PTI.

According to BJP sources, although the party is not attaching much importance to the scattered opposition in the district, resentment among a section of party workers over the selection of candidates is a matter of concern as, in some places, it has altered the party's caste equations. In the Abdasa seat, BJP's candidate is former Congress turncoat and sitting MLA Pradyuman Sing Jadeja, from the Kshatriya community.

Apart from candidates of Congress and AAP, an independent candidate from the Kshatriya–Jadeja community is also contesting the polls. The independent candidate earlier used to be a BJP sympathizer. In the Bhuj seat, the party has replaced its two-time sitting MLA and Assembly Speaker Nimaben Acharya with local party leader Keshubhai Shivdas Patel, known for his organisational skills.

Supporters of Acharya are not happy with the development. In Anjar, the party has replaced its sitting MLA Vasanbhai Ahir with party leader Trikambhai Chhanga. In Mandvi, the BJP has picked Anirudhh Dave over its sitting MLA Virendrasinh Jadeja. Jadeja has been given a ticket from the neighbouring Rapar seat, which the Congress had won in 2017.

"For us, it is not the opposition, but resentment among a section of party workers is a matter of bit concern. In some seats, people from the same community, just as our official candidates, are contesting as Independents," a senior district BJP leader said.

Congress is carrying out a very low-pitch campaign. The opposition party is doing its best to avoid the minefield of communal politics and is focusing more on governance issues. For Congress, winning back the district, and especially retaining the two seats it had won last time, is a big challenge.

"We are confident of winning all the six seats in the Kutch district. The people here are fed up with the misrule of the BJP. The BJP is using all tricks like the communal campaign to everything at its disposal to win the election," Congress district president Yajuvendra Jadeja said.

Congress, like in the rest of Gujarat, is carrying out a silent campaign in Kutch also by reaching out to the masses in every remote corner of the region, trying to encash anti-incumbency against the BJP and its promises on governance issues if voted to power. However, the entry of the AAP and the AIMIM has disturbed the poll arithmetic of the region.

The Congress and the BJP are apprehensive that AAP might eat into their votes among the Patel community, Kshatriyas, a section of minorities, and Dalits, thus delivering a fatal blow in the closely-contested seats.

Although the local BJP unit is elated over the entry of AIMIM as there will be a contender for minority votes apart from the Congress in seats like Bhuj and Mandvi, which has considerable Muslim electorate, and AIMIM is in the fray, the Congress is working to minimize the damage that the AAP and AIMIM may cause. The AAP stresses governance issues in the arid region and has promised to end the region's water crisis if voted to power.

"The people of this area, especially in remote areas, lack basic amenities like education, health, and water. For us, good governance is first and foremost," Kutch district AAP media in-charge Ankita Gor said.

The biggest positive aspect for the AAP in the election is the freshness it brings to the decade-old binary of Congress and BJP in the state's political arena and its track record of delivering good governance, party leaders said.

According to locals, the negative factor for AAP in the Kutch region is the absence of the organizational strength to take on the well-oiled election machinery of the BJP and Congress. The AIMIM said it is contesting only two seats in the entire Kutch district, so the allegation that they are here to cut in Congress's vote is baseless.

In the 2019 Lok Sabha polls, the BJP won the Kachchh Lok Sabha seat, which it has been winning since 1996, by pocketing more than 62 per cent of the total votes polled, whereas the Congress bagged just 32 per cent.

Apart from governance issues, drug hauls, a water crisis, and communal clashes have become major election issues. Elections for the 182-member Gujarat Assembly will be held on December 1 and 5. The votes will be counted on December 8.