World shocked as tennis No. 1 Ashleigh Barty, 25, retires at the peak of her game 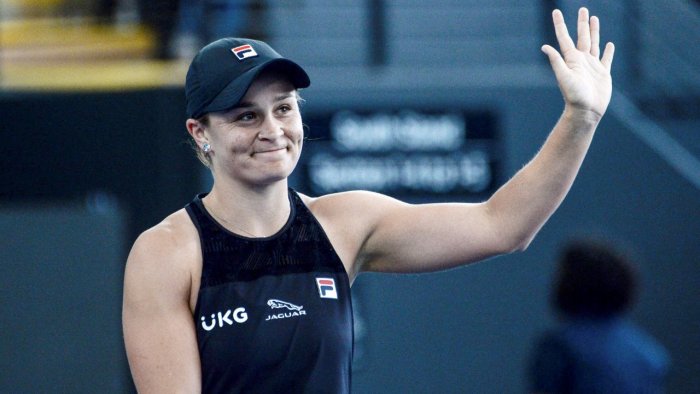 Australia's world number one Ash Barty has retired at the age of 25 and at the peak of her game, citing the fulfilment of her tennis goals and fatigue with life on the Tour.

She quits with 15 titles, less than two months after winning the Australian Open, her third Grand Slam singles triumph following Wimbledon in 2021 and the 2019 French Open.

"I know how much work it takes to bring the best out of yourself ... I don't have that in me anymore," she said in a video posted on her Instagram account on Wednesday.

"I don't have the physical drive, the emotional want and everything it takes to challenge yourself at the very top level any more. I am spent."

It marks Barty's second retirement from the sport, having walked away from the game as a teenager in late-2014 after becoming disaffected by the Tour.

She returned in 2016 and rose rapidly up the rankings, earning global acclaim for her brilliant tennis and fans' affection for her unfailing good sportmanship and laid-back demeanour.

She spent a total of 121 weeks as world number one and appeared destined for more success in the game's biggest tournaments.

However, she never made any secret of her dislike for the touring life and her battles with homesickness.

Barty suffered depression on the Tour after turning professional as a teenager, leading her to quit and briefly reinvent herself as a professional cricketer in her home state of Queensland.

When the Covid-19 pandemic halted elite tennis in 2020, she took nearly a year off from the game to spend time with family rather than rejoin the circuit after it resumed.

"I know I've done this before, but in a different feeling," she said.

"I'm so grateful for tennis, it's given me all of my dreams, plus more, but I know the time is right now for me to step away and chase other dreams and to put the racquets down."

She bows out having earned almost $24 million in career prizemoney and as a national hero having ended a 44-year wait for a home winner at the Australian Open in January by beating American Danielle Collins in the final.

As the second Aboriginal Australian to win a Grand Slam title, following in the footsteps of the great Evonne Goolagong Cawley, Barty has also become an idol for her country's Indigenous population
Barty's bombshell triggered tributes from players and officials.

"Happy for @ashbarty, gutted for tennis," said Briton Andy Murray. "What a player."

WTA boss Steve Simon said Barty always led by example "through the unwavering professionalism and sportsmanship she brought to every match.

"With her accomplishments at the Grand Slams, WTA Finals, and reaching the pinnacle ranking of No.1 in the world, she has clearly established herself as one the great champions of the WTA."

Her retirement echoes Justine Henin's decision to quit in 2008 as a 25-year-old world number one with seven Grand Slam titles. Henin came out of retirement in 2010, inspired by fellow Belgian Kim Clijsters' comeback.

2005 US Open champion Clijsters retired in 2007 at the age of 23 but returned after a two-year hiatus to claim another three Grand Slam titles.

Lucknow, May 12: Singing of the national anthem "Jana Gana Mana" has been made compulsory at all madrasas in Uttar Pradesh from Thursday, an official said here.

The Registrar of the Uttar Pradesh madrasa Education Board, SN Pandey, also issued an order to this effect to all the District Minority Welfare Officers on May 9.

According to the decision taken in the board meeting on March 24, the singing of the national anthem at the time of prayer at all madrasas across the state has been made mandatory, he said.

He said regular classes at the madrasas began on May 12 after the Ramzan holidays, and the order came into effect on the same day.

The order said that before the commencement of classes, the national anthem will be sung by teachers and students from the upcoming academic session in all recognised, aided and non-aided madrasas in the state.

The District Minority Welfare Officers have been tasked to ensure compliance with the order.

General Secretary of Teachers' Association Madaris Arabia, Diwan Sahab Zaman Khan, said that till now at madrasas, usually Hamd (praises to Allah) and Salam (salutations to Muhammad) were recited before the start of classes.

The national anthem was also sung in some, but it was not compulsory. "Now it has been made mandatory," he added.

Minister of State Danish Azad Ansari had also said that the government wants the madrasa students to be "full of patriotism".

At present, there are a total of 16,461 madrasas in Uttar Pradesh and 560 of them receive government grants.