Bengaluru: The Secondary School Leaving Certificate (SSLC) examinations in Karnataka concluded on Friday with an overall average of about 98 per cent attendance amid the coronavirus scare. Chief Minister B S Yediyurappa congratulated the lakhs of students who appeared for the crucial exercise braving the coronavirus pandemic situation.

An average of about 98 per cent of 8.5 lakh odd enrolled students took the exams which began on June 25, after the government stuck to its decision to go ahead with them despite rising coronavirus cases but laid down a string of safety measures, including face masks and maintaining distancing by seating only one student a bench.

Examinations for all main subjects had been completed and alternative subjects such as music would take place on Saturday, Education department officials said.

"I heartily congratulate students who faced the examination even during the coronavirus pandemic," Mr Yediyurappa tweeted.

"The exam is a proof that anything can be made possible if all the government departments work in tandem," Mr Kumar tweeted.

Later addressing a press conference, he said on Friday 98.10 per cent attendance was recorded compared to 98.76 for the same paper last year.

"Credit goes to children. First day, parents were scared and students were sceptical and there was a big challenge before us. But the children appearing for the exam instilled confidence. They came with masks, sanitisers and were careful about maintaining social distancing. Our children have set an example for others to follow," Mr Kumar said.

Lauding the students, parents and the government staff who made the exam possible ignoring the virus scare, Medical Education Minister Dr K Sudhakar said Karnataka has set an example by successfully conducting the examination.

The Karnataka Secondary Education Examination Board, which conducted the examination, faced various challenges. While protecting students from coronavirus infection was the top priority, transportation, security and convincing the parents to allow their children to take up the exam were the other factors it encountered.

According to sources in the department, the education officers had directed authorities of all the schools to call the parents and students to make sure that they appear for the examinations.

The Central Board of Secondary Education (CBSE) and boards of various neighbouring states either gave general promotion or decided to give marks to the students based on their performance in the earlier tests conducted by the schools.

The exams were conducted at a time when there was a sudden spurt in coronavirus cases in Karnataka, especially Bengaluru. Expressing apprehension, former chief minister and JD(S) leader H D Kumaraswamy had appealed to the government to postpone the examination but the government went ahead with its decision.

Bengaluru,  Aug 4: Former Karnataka Chief Minister and Leader of Opposition in the State Assembly, Siddaramaiah on Tuesday said that he has tested positive for COVID-19 and admitted himself to a hospital.

"I have been tested positive for COVID-19 and also been admitted to the hospital on the advice of doctors as a precaution. I request all those who had come in contact with me to check out for symptoms and to quarantine themselves," Siddaramaiah tweeted.

Earlier on Sunday, Karnataka Chief Minister BS Yediyurappa had said that he tested positive for the novel coronavirus. 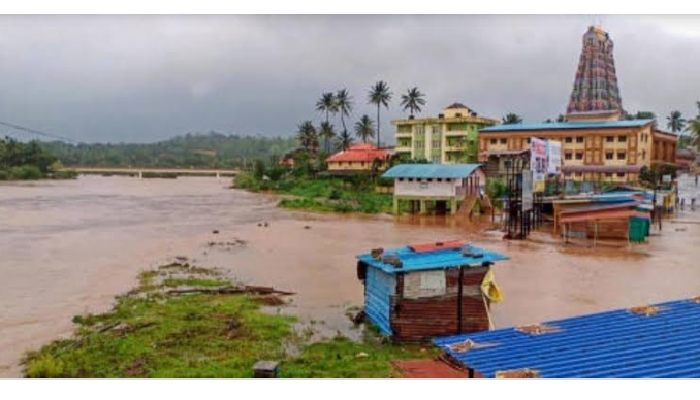 Bengaluru, Aug 9: Swollen rivers and flood-like situation continue to threaten lives and property in several parts of Karnataka that have been ravaged by torrential rains over the last few days.

Though there has been a respite from the downpour in some parts, rivers continue to flow above the danger mark, inundating low lying areas in several parts of Malnad, coastal and interior Karnataka.

There are also reports of continued landslides in hilly areas of Kodagu and Chikkamagaluru.

In Dakshina Kannada, heavy rains have submerged several areas in Bantwala and Belthangady, among others, with the Netravati river overflowing and also water being released from nearby dams.

Officials said incessant rains in Cauvery river catchment areas have led to increased inflow in the Krishna Raja Sagara dam in Mandya district. Water is being released from it and people living in low lying areas have been warned, they said.

There is also a flood-like situation in Najanagudu and nearby areas of Mysuru as the swollen Kapila river has inundated roads connecting Ooty in neighbouring Tamil Nadu, with water being released from Kabini dam.

There has been some respite from heavy rains in certain parts of Kodagu, which has been ravaged by floods and landslides. However, several areas of the district continue to be in deluge with the Cauvery and Lakshmana Tirtha rivers overflowing due to rains in the hilly areas.

There are also reports of landslides in some parts of the district.

Meanwhile, continuing rains are hampering the search operation by NDRF and authorities to locate five people, including the priest at Talacauvery, the origin of the river Cauvery, who had gone missing due to massive landslides at Bramhagiri hills on Wednesday night.

There are also reports of landslides at a few places in Charmadi ghat region of Chikkamagaluru and the road connecting to Dakshina Kannada has been closed temporarily.

Though Belagavi district has had some respite from the heavy rains, flood like situation continues to persist as the Krishna river and its tributaries are swollen due to continued inflows because of rains in neighbouring Maharashtra.

Inflow has also increased to the Tungabhadra dam of Ballari district due to rains in the catchment areas of Shivamogga and Chikkamagaluru.

There is a similar flood like situation in parts of Yadgir, Raichur and Bagalkote districts with water being released from various dams.

The state government has released ₹ 50 crore for emergency relief and has announced ₹ 10,000 as immediate relief each to affected families.

An amount of ₹ 5 lakh has been announced for completely damaged houses, while in the case of partially damaged ones, relief will be distributed considering the extent of damage.