Dubai, June 30: The United Arab Emirates is all set to reopen mosques and other places of worship at 30 per cent capacity from July 1.

However, Friday prayers will remain suspended in the country, said Saif Al Dhaheri, Spokesperson for the National Crisis & Emergency Management Authority (NCEMA) during a virtual press briefing on Monday.

He said health authorities already conducted Covid-19 tests for Imams and workers serving at the mosque to ensure health and safety of the worshippers.

Al Dhaheri also spelt out guidelines that worship centres have to follow to welcome worshippers.

A distance of three metres should be observed between each worshippers and no handshakes are allowed. Worshippers will have to perform ablutions at home. People should bring their own personal copies of Holy Quran or read from digital copies. It is also mandatory for all worshippers to download and activate contract tracing app AlHosn.

"We urge the public to cooperate by following precautionary measures including social distancing. Children under 12 years old, the elderly as well as individuals with chronic diseases should avoid going to mosques," said the official.

The UAE first announced the suspension of public prayers in all places of worship on March 16, which was extended until further notice on April 9.

As Khaleej Times reported, places of worship had been preparing to reopen since the last few weeks by sanitizing parking lots and outdoor areas, entrances, main prayer halls and ablution areas.

The spokesperson also announced that the Private and commercial boat trips and water sports will be allowed to operate at reduced capacity of 50 per cent but by following precautionary measures.

The total number of recovered cases of Coronavirus (Covid-19) in the UAE has reached 37,076 with 665 cases recovered today after receiving treatment. Since the beginning of June, UAE has had a daily recovery average of 660 cases, said Dr. Amna Al Shamsi, Spokesperson for the UAE government.

1. Maintain a distance of 3 metres between worshippers.

3. Ablutions must be performed at home.

4. To read the Holy Quran, worshippers must bring their own copies.

6. People in vulnerable categories like those with chronic diseases and the elderly must not visit the mosques.

"His Highness the Amir Sheikh Sabah Al-Ahmad Al-Jaber Al-Sabah ... has undergone surgery this morning, with thanks to God for its success," the head of the emir's office Sheikh Ali Jarrah al-Sabah said, as quoted by state news agency KUNA.

The 91-year-old was admitted to hospital for a medical checkup.

Yesterday, a royal order was issued assigning Crown Prince Sheikh Nawaf al-Ahmed al-Sabah, the emir's designated successor, "to take over some constitutional jurisdictions of His Highness the Emir temporarily"

In August 2019, Kuwait acknowledged the emir suffered an unspecified medical "setback" that required him to be hospitalised. 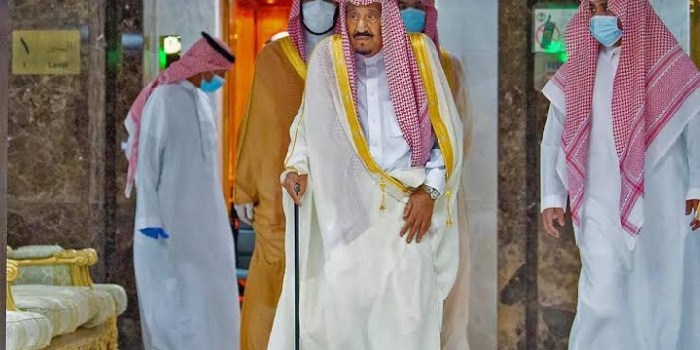 Only up to 10,000 people already residing in the kingdom are participating in this year's pilgrimage, compared with 2019's gathering of some 2.5 million from around the world.

"Holding the ritual in the shadow of this pandemic... required reducing the numbers of pilgrims, but it obliged various official agencies to put in double efforts," 84-year-old King Salman said in a speech read out on state television by acting media minister Majid Al-Qasabi.

"The hajj this year was restricted to a very limited number of people from multiple nationalities, ensuring the ritual was completed despite the difficult circumstances," he said.

The speech came on the occasion of Eid al-Adha, the Muslim festival of sacrifice, a day after the king left hospital following a 10-day stay for surgery to remove his gall bladder.

The hajj, which began on Wednesday, is one of the five pillars of Islam and a must for able-bodied Muslims at least once in their lifetime.

Authorities implemented the "highest health precautions" during the rituals, the king said.

Pilgrims, who were all tested for the virus, are required to wear masks and observe social distancing.

For Friday's "stoning of the devil", the last major ritual of the hajj, Saudi authorities offered the pilgrims pebbles that were sanitised to protect against the pandemic.

In a sign that its strict measures were working, the health ministry reported no coronavirus cases in the holy sites on Wednesday or Thursday.

Netanyahu is charged with fraud, breach of trust and accepting bribes in a series of scandals in which he is alleged to have received lavish gifts from billionaire friends and exchanged regulatory favors with media moguls for more agreeable coverage of himself and his family.

The trial opened in May. Just before appearing in front of the judges, Netanyahu took to a podium inside the courthouse and flanked by his party members bashed the country’s legal institutions in an angry tirade.

Netanyahu was not expected to appear at Sunday’s hearing, which is taking place at an occupied Jerusalem court and is mostly a procedural deliberation.

The trial resumes as Netanyahu faces widespread anger over his government’s handling of the coronavirus crisis.

While the country appeared to have tamped down a first wave of infections, what’s emerged as a hasty and erratic reopening sent infections soaring. Yet even amid the rise in new cases Netanyahu and his emergency government — formed with the goal of dealing with the crisis — appeared to neglect the numbers and moved forward with other policy priorities and its reopening plans.

It has since paused them and even re-impose restrictions, including a weekend only lockdown set to begin later this week.

Netanyahu’s government has been criticized for a baffling, halting response to the new wave, which has seen daily cases rise to nearly 2,000. It has been slammed for its handling of the economic fallout of the crisis.

His trial thus comes at inopportune timing. Netanyahu had hoped to ride on the goodwill he gained from overcoming the first wave of infections going into his corruption trial, but the increasingly souring mood has affected his approval rating and may deny him the public backing he had hoped for. The anger has sparked protests over the past few weeks that have culminated in violent clashes with police.