Exposed: Those who met with PM Modi in Kutch were not farmers but BJP activists! 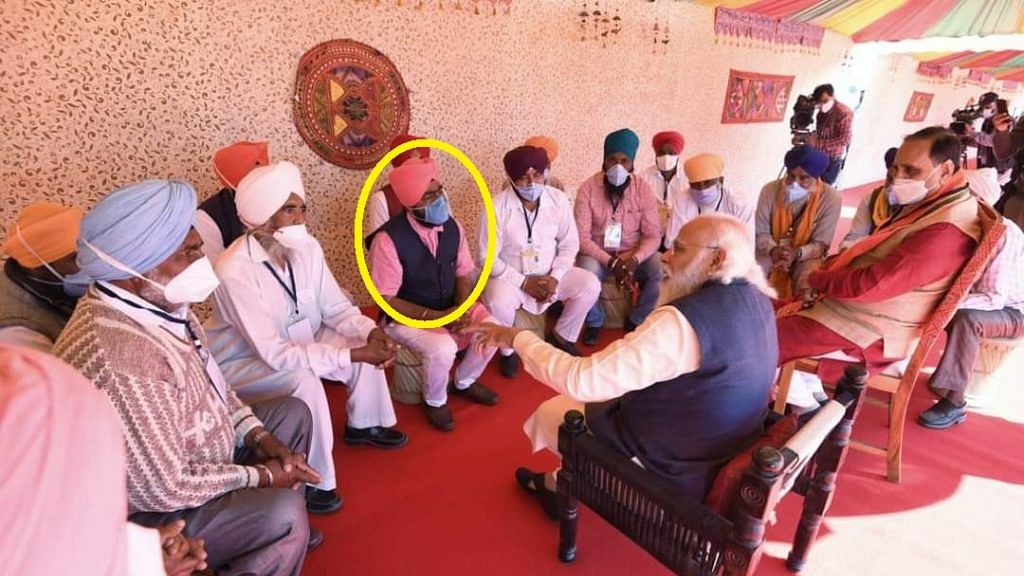 New Delhi, Dec 20: At a time when at least 22 farmers have lost their lives and lakhs of farmers are camping in the deadly winter at various borders around Delhi, demanding the repeal of the contentious farm laws, PM Narendra Modi’s meeting with a delegation of farmers in Kutch, Gujarat dominated the headlines last week.

Media reports said the prime minister met farmers (of his own choice) to dispel their worries and address their grievances regarding farms laws, but it was later revealed after an investigation that it was all lies propagated by the media with an aim to:

Divert the attention from the protest
And to send out a message that PM is not indifferent to the farmers’ plight and protest
An investigation by Junputh (a Hindi website) and NH revealed that those who met the PM during his Kutch visit were BJP activists from Sikh community, not farmers. And the topic of the discussion was not even related to the protest but the construction of a Gurudwara in Lakhpat Taluka in Kutch region.

The person who led the delegation of the so called farmers is BJP general secretary of Kutch zone – Raju Bhai Sardar. Donning an orange turban, Raju Sardar can be seen sitting in front of the PM in the picture tweeted out by the news agency ANI on December 15.

— ANI (@ANI) December 15, 2020
While tweeting the picture, ANI and the Twitter handle of the Chief Minister of Gujarat said the prime minister met with various local groups from Kutch, Kutchi women involved in handicraft activities and “Sikh farmers.” Raju Sardar also claimed that he led a delegation of farmers to meet the PM.

During his visit to Kutch, PM Shri @narendramodi, accompanied by CM Shri @vijayrupanibjp, met and interacted with various local groups including Kutchi women active in handicraft activities as well as Sikh farmers who are settled in Kutch. pic.twitter.com/fRIIpYA7oS

— CMO Gujarat (@CMOGuj) December 15, 2020
But when a reporter from the TV news channel Aaj Tak asked one of the farmers about the topic discussed in the meeting, he said that the discussion was focused on constriction of a Gurudwara.

— Mechanophilia (@51Mechanophilia) December 17, 2020
Meanwhile, when PM Modi was holding a meeting with the so-called farmers, a group of real farmers were agitating against the farm laws in Kutch. But the news of protesting farmers was completely boycotted by the Gujarati as well as the national media.

Those who know Kutch politics have pointed out that Raju Bhai Sardar’s real name is Jugraj Singh and he belongs to Nara village. A restaurateur, Sardar rose to prominence in BJP’s hierarchy after he led a similar delegation of Sikhs to meet Modi who as Chief Minister of Gujarat was then facing Sikhs’ angst over freezing of land accounts in 2013.

Before becoming zonal secretary of the BJP, Sardar was elected Sarpanch of Nara with active support from the BJP activists.

Nara is known as mini-Punjab of Kutch region due to a large population of Sikh community. In Nara and Kothara villages of this region, Sikh Community dominates the demography.

His website claims that he is a member of a 15-point programme committee for minority welfare. Currently busy with the construction of 18 rooms resort in Lakhpat Sarai, Raju Bhai Sardar also heads the Lakhpat Taluka Gurudwara. 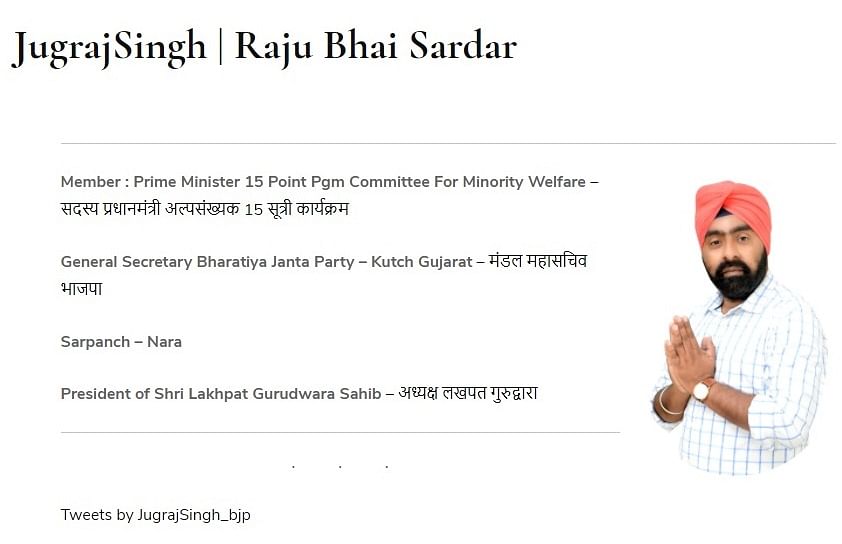 Shame,these desh drohi British chelas ready to do anything for their self benddifit.

Over 1,700 test covid positive in Kumbh Mela in 5 days

Dehradun/Rishikesh, Apr 15: A total of 1,701 people have tested positive for Covid-19 in the Haridwar Kumbh Mela area from April 10 to 14 confirming fears that one of the world's largest religious gatherings may contribute further to the rapid rise in coronavirus cases.

The numbers include both RT-PCR and Rapid Antigen Test reports of devotees and seers of different akharas (ascetic groups) over the five-day period in the entire Mela Kshetra extending from Haridwar to Devprayag, Haridwar Chief Medical Officer Shambhu Kumar Jha said on Thursday.

More RT-PCR test reports are awaited and the trend shows that the number of infected persons in the Kumbh Mela Kshetra is likely to climb to 2,000, he said.

The Kumbh Mela area is spread over 670 hectares covering parts of Haridwar, Tehri and Dehradun districts, including Rishikesh.

A majority of the 48.51 lakh people who took part in the last two royal baths (Shahi Snan) held on the occasion of Somwati Amavasya on April 12 and Mesh Sankranti on April 14 were seen openly violating Covid norms like wearing of face masks and social distancing.

Despite their best efforts, the police could not impose the standard operating procedures (SOPs) on the seers of akharas and the ash-smeared ascetics thronging Har Ki Pairi ghat on the two major bathing days due to severe time constraints.

As the 13 akharas had to take their holy dip at Har ki Pairi in accordance with their allotted time slots before sunset, the police and paramilitary personnel were hard-pressed to ensure each of them vacated the ghat before the arrival of the next akhara in line to prevent chaos.

As seers were averse to undergoing RT-PCR tests till the Mesh Sankranti Shahi Snan of April 14, both testing and inoculation in the Kumbh Kshetra including the areas allocated to the akharas are likely to be stepped up in the coming days, Jha said.

Bengaluru, Apr 9: Bus services were hit in Karnataka for the third consecutive day on Friday, as the stalemate between the employees of the road transport corporations, who are on an indefinite strike on wage related issues, and the state government continued.

With the government on Thursday evening reiterating that it was not possible to fulfil their demand for the implementation of the Sixth Pay Commission report, RTC employees have decided to continue with the strike.

As employees belonging to all the four transport corporations did not attend duty, buses continued to remain off the roads across the state, including Bengaluru, affecting daily commuters.

Passengers travelling to and from distant areas and office-goers were the most affected.

Private buses, mini buses, maxi cabs and other passenger transport vehicles were seen providing services to stranded passengers in different parts of the city and the state.

However, the number of passengers using private buses continued to remain scarce in the city, as people were using their own vehicles or were seen using cabs, Metro and auto rickshaws, especially in the city areas, private operators said.

Metro has increased the frequency of its services between 7 am and 9 pm.

Amid threats of ESMA and "no work no pay", very few RTC workers have returned to work and buses are said to be operating on some routes in the city along with police escort, sources said, adding that there are similar reports from few other places in the state.

Transport Department Principal Secretary Anjum Parvez on Thursday had said as a temporary arrangement, employees who have retired in the last two years have been requested to come back to service.

"They should be physically fit, medical and eye tests will be done."

Also requesting employees to get back to work, as the government has fuliffed 8 of their 9 demands and has decided for 8 per cent salary increase as an interim relief, he had said that per day loss because of the strike is about Rs 20 crore.

RTCs that have been warning employees about continuing with the strike, have started taking action against trainee employees and are issuing notice for absence from work.

Washington, Apr 20: Former US President Donald Trump has urged his successor Joe Biden to reinstate the travel ban on certain Muslim countries in order to keep the country safe from what he called radical Islamic terrorism.

“If Joe Biden wants to keep our country safe from radical Islamic terrorism, he should reinstitute the foreign country travel ban and all of the vetting requirements on those seeking admission that go with it, along with the refugee restrictions I successfully put in place,” Trump said in a statement on Monday.

“Terrorists operate all over the world and recruit online. To keep terrorism and extremism out of our country, we need to have smart, commonsense rules in place so we don’t repeat the many immigration mistakes made by Europe—and the USA prior to ‘Trump’,” said the former US president.

Trump had imposed a ban on travel from several Muslim countries including Iran, Iraq, Libya, Somalia, Sudan, Syria, and Yemen. However, Biden lifted the ban after assuming office.

6 including 4 children die while swimming in two separate accidents