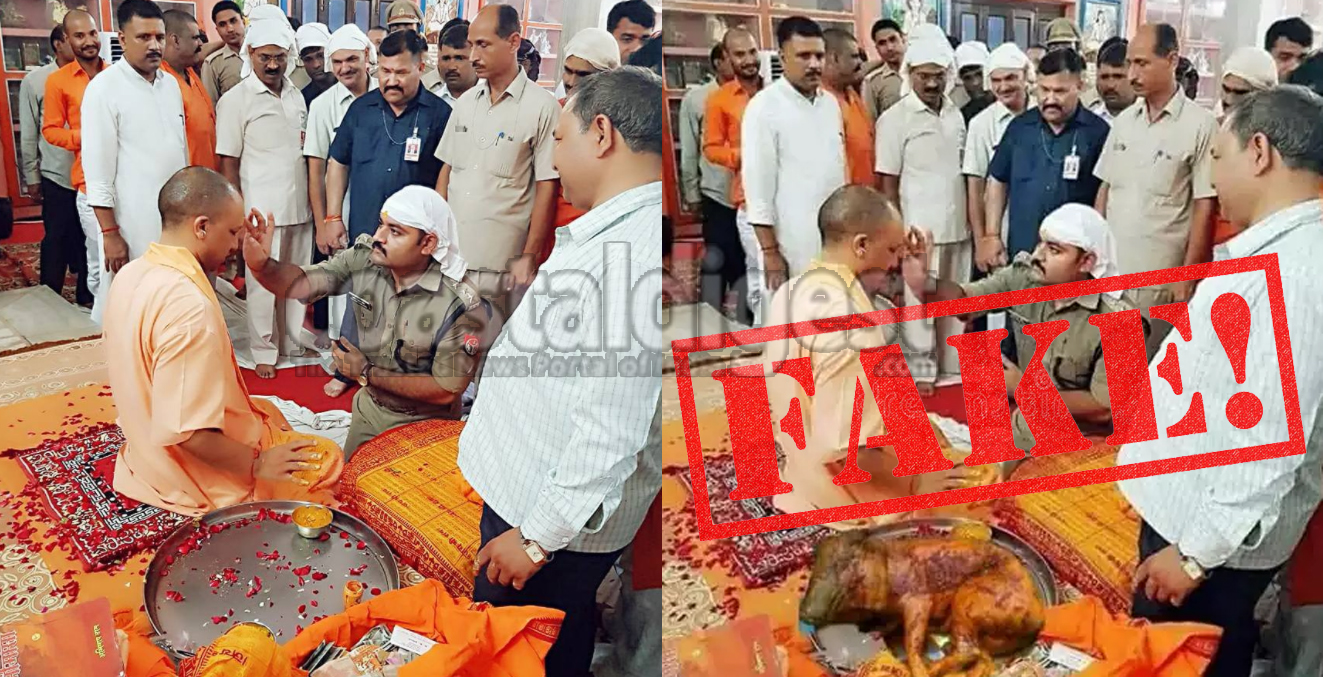 Newsroom, Aug 17: A doctored image of Uttar Pradesh Chief Minister Yogi Adityanath sitting with a plate full of pork on his side is now going viral on social media platforms.

The photo is uploaded by many users on Facebook. It is also being widely circulated on WhatsApp.

The photo is the morphed version of the original photo where the plate beside Yogi has Hindu puja items instead of pork.

The original photo was captured in 2018 when photographs of a police officer in uniform kneeling down at the feet of Yogi, on the occasion of Guru Purnima at the Gorakhnath temple, went viral on social media.

Arnab Goswami can use tagline ‘Nation Wants To Know’ as part of speech: Delhi HC

New Delhi, Oct 23: The Delhi High Court on Friday said Republic TV's editor-in-chief Arnab Goswami can use the tagline NATION WANTS TO KNOW' as part of his speech or presentation.

The high court noted in its order that Bennett Coleman and Co. Ltd, which has filed a suit against Goswami or ARG Outlier Media Pvt Ltd, which owns Republic TV, has submitted that the journalist is free to use the same as part of his speech/presentation of any news channel.

However, if Goswami or ARG Outlier Media Pvt Ltd choose to use NATION WANTS TO KNOW' as a trade mark regarding any of their goods/ services, they will have to maintain accounts for such usage and the accounts shall be filed in court regularly, it said.

Regarding the tagline NATION WANTS TO KNOW, no interim order is passed at this stage in favour of the plaintiff (Bennett Coleman). As submitted by the learned counsel for the plaintiff, defendant No. 2 (Goswami) is free to use the same as part of his speech/presentation of any news channel, etc, Justice Jayant Nath said.

The plaintiff has filed the suit seeking to restrain Goswami or ARG Outlier Media Pvt Ltd from using the trademark or title or tagline NEWSHOUR' and NATION WANTS TO KNOW' as it infringes its registered mark.

The plaintiff said Times Now' is a news channel operated by the plaintiff having several segments of programmes, one of which was launched in 2006 titled THE NEWSHOUR' pertained to discussions, panel discussions and debates on current topics.

It said Goswami, who was earlier associated with Times Now and resigned in 2016, launched his channel Republic TV' and website www.republicworld.com and they also filed trade mark applications for registration of the mark NATION WANTS TO KNOW', ARNAB GOSWAMI NEWSHOUR' and GOSWAMI NEWSHOUR SUNDAY' claiming proprietary rights.

The journalist told the high court that viewers of the two news channels are well informed, literate and can never associate or confuse between the shows or programmes aired on the respective news channels.

He claimed that the Bennett Coleman's animosity with the Republic TV is well known and publicised and hence, there is no question of any passing off in such circumstances and alleged that the proceedings have been initiated in the form of vendetta litigation and merely in a purported attempt to harass and arm-twist the defendants.

The high court said it was of the opinion that it is only after evidence has been led that it can be ascertained as to whether the plaintiff was using the aforesaid mark as a trade mark or it was merely being used as a form of speech in the course of conducting the news channel or in the course of carrying on interviews/presentations by defendant No. 2 (Goswami). These are aspects on which, prima facie, no view can be made at this stage based on the documents placed on record, namely, screen shots of various sites of Twitter, Facebook, etc.

Mumbai, Oct 24: The legal counsel of Vishesh Films, on behalf of filmmaker Mahesh Bhatt, has issued a statement in response to an Instagram video uploaded by actress Luviena Lodh, alleging that Bhatt has been harassing her and her family.

“With reference to video released by one Lavina Lodhi. We, on behalf of our client Mahesh Bhatt, refute the allegations. Such allegations are not only false and defamatory but have serious consequences in law. Our client will take such action in accordance with law as advised,” said the statement.

On Friday, Lodh posted a one minute, 48-second video on her verified Instagram page claiming that Bhatt has been harassing her. She also claimed that she had been married to Bhatt’s nephew Sumit Sabharwal, adding that she had filed for a divorce after getting to know that he supplies drugs to actors like Amyra Dastur and Sapna Pabbi. She also alleged that he was into supplying women and that Bhatt was aware of the fact.

Speaking in Hindi, Lodh says in her video: “Namaste. My name is Luviena Lodh, and I’m filming this video for the safety of my family and myself. My marriage took place with Mahesh Bhatt’s nephew Sumit Sabharwal and I have filed for a divorce on getting to know that he supplies drugs to actors like Amyra Dastur and Sapna Pabbi etc. His phone contains images of numerous girls that he shows to directors, and so he also supplies women.

“Mahesh Bhatt is aware of these things. Mahesh Bhatt is the biggest don of the industry. He operates this entire system and if you don’t play by their rules they make life miserable for you. Mahesh Bhatt has destroyed many lives — he has ensured many actors, directors and composers lose their jobs. He makes a call and people lose their jobs, and they don’t even get to know about it. He has destroyed many lives in this manner, and since the time I filed a case against him he is after my life. He has tried to enter my home in different ways and has also tries his best to get me thrown out of my house.

“When I try to file an NC [non-cognisable complaint] at a police station, no one is willing to lodge the complaint. If at all an NC is filed, no action is taken. If something should happen to me and my family, the only people who are responsible are Mahesh Bhatt, Mukesh Bhatt, Sumit Sabharwal, Sahil Saigal, and Kumkum Saigal. People should at least get to know of how many lives they have destroyed behind closed doors and the things they can do, because Mahesh Bhatt is extremely powerful and influential. Thank you.”

Lodh had a role in the 2010 release ‘Kajraare’ starring Himesh Reshammiya and Sara Loren. The film was written by Bhatt and directed by his daughter Pooja Bhatt.