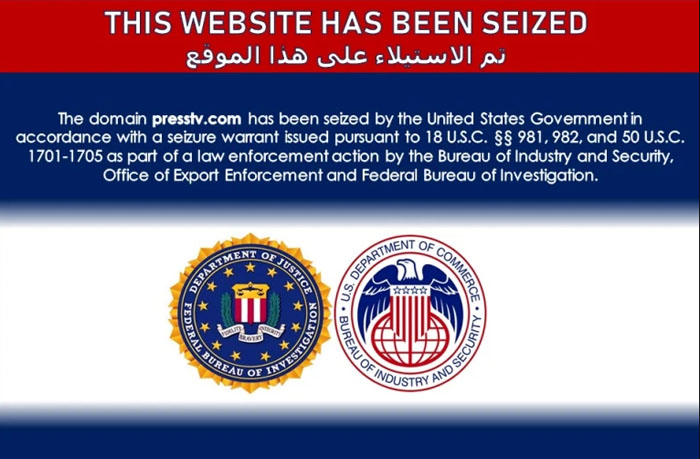 In a direct assault on press freedom, the US Justice Department has seized 33 Iranian government-affiliated media websites, as well as three of the Iraqi group Kataeb Hezbollah, which it said were hosted on US-owned domains in violation of sanctions.

The websites were held by the Iranian Islamic Radio and Television Union (IRTVU), which is reportedly run by the Islamic Revolutionary Guard Corp’s Quds Force (IRGC).

“Components of the government of Iran … disguised as news organisations or media outlets targeted the United States with disinformation campaigns and malign influence operations,” the Justice Department said in a statement.

Iran’s foreign ministry on Wednesday called the seizure an example of a “systematic effort to distort freedom of speech on a global level and silence independent voices in media”.

Spokesman Saeed Khatibzadeh in a statement said the “shameful” move by Washington shows that the Biden administration is continuing former President Donald Trump’s path, and vowed Iran will pursue the issue through legal channels.

Both IRTVU and IRGC have been placed on the US sanctions blacklist, making it illegal for Americans, US companies, and foreign or non-American companies with US subsidiaries to have business with them or their subsidiaries.

Visitors to leading Iranian media sites such as Press TV and Al-Alam, the country’s main English language and Arabic language broadcasters, as well as the Al-Masirah TV channel of Yemen’s Houthis, were met with single-page statements on Wednesday, declaring the website “has been seized by the United States Government” accompanied by the seals of the Federal Bureau of Investigation and the US Commerce Department.

Kataeb Hezbollah, the Iraqi group which owned three sites that were seized, is a military faction with close ties to Tehran that Washington has formally designated a terror group.

The US government also took over the domain name of the news website Palestine Today, which reflects the viewpoints of Gaza-based groups Hamas and Islamic Jihad, redirecting the site to the same notice.

Bahrain’s LuaLua TV, a channel run by opposition groups with offices in London and Beirut, was also seized by the US.

State-run Islamic Republic of Iran Broadcasting (IRIB) accused the United States of repressing freedom of expression and joining forces with Israel and Saudi Arabia “to block pro-resistance media outlets exposing the crimes of US allies in the region”.

IRIB said it will not let the media of the so-called “resistance axis” be silenced.

On the website of their political wing, Yemen’s Houthi rebels branded the action “American piracy and copyright confiscation”.

“The government of the United States of America is banning the Al-Masirah website without any justification or even prior notice,” they said.

A-Masirah quickly established a new website, using its name but swapping the .net domain for .com.

Press TV, launched in June 2007, is perhaps the most well known of the seized sites. It is the state-run Islamic Republic of Iran Broadcasting’s (IRIB) English-language service.

There are no private television or radio stations in Iran. Satellite dishes, while widespread, also are illegal. That leaves IRIB with a monopoly on domestic airwaves.

Supporters of Press TV view the site’s editorial line as anti-Zionist, but the outlet has previously run into trouble with Western authorities for its reporting. The Anti-Defamation League has criticised the channel as “one of the world’s leading dispensers of conspiratorial anti-Semitism in English”.

Jammu, Oct 11: In one of the bloodiest encounters this year, five Army soldiers, including an officer, were killed during an anti-insurgency operation in Jammu and Kashmir’s border Poonch district on Monday.

A defence spokesman said the operation was launched in a village close to Dera Ki Gali in Surankote, Poonch, during early hours of Monday following inputs about the presence of terrorists there.

“The hiding terrorists opened heavy fire on the search parties resulting in critical injuries to a Junior Commissioned Officer (JCO) and four other ranks. They died from their injuries,” he said.

There are reports that a group of heavily-armed militants have managed to sneak from across the Line of Control (LoC) and are hiding in Chamrer forest in Poonch, sources said. Reinforcements of both Army and police, including senior officers, have rushed to the spot.

The daily rise in new coronavirus infections has been below 30,000 for 30 straight days and less than 50,000 daily new cases have been reported for 119 consecutive days now.

A decrease of 1,134 cases has been recorded in the total active number of Covid-19 cases in a span of 24 hours.

The number of people who have recuperated from the disease surged to 3,35,48,605, while the case fatality rate was recorded at 1.33 per cent.

The cumulative doses administered in the country so far under the nationwide Covid-19 vaccination drive has exceeded 102.10 crore.

Tanden, 51, a senior adviser to President Biden was named White House staff secretary on a morning staff call on Friday, the CNN reported.

The White House staff secretary is a behind-the-scenes but critical role in the West Wing, responsible for managing paper flow to the President from other areas of the administration and federal government. The person filling the job has been viewed as one of the most powerful in the building, it said.

In addition to her new duties, Tanden will keep her senior adviser title "and will continue to provide leadership on particular projects and initiatives," Politico reported, quoting a White House official.

She will report to White House chief of staff Ron Klain, it said.

The appointment does not require Senate confirmation.

"The Staff Secretary role is the central nervous system of the White House and moves the decision-making process and manages a wide variety of issues for the President," the White House official said.

Tanden has "over two decades of experience in policy and management which are critical elements of the role. Her experience across domestic, economic and national security policy will be a key asset in this new role," the official said.

Tanden's appointment as White House staff secretary came eight months after she withdrew her nomination as Director of the White House Office of Management and Budget due to stiff opposition from Republican senators.

In March, she faced a tough time for the confirmation of her nomination as Director of the White House Office of Management and Budget (OMB) over her past social media outbursts against several lawmakers, including those from her own Democratic Party.

While accepting Tanden's request to withdraw her name from nomination in March, President Biden had said, "I have the utmost respect for her record of accomplishment, her experience and her counsel, and I look forward to having her serve in a role in my Administration. She will bring valuable perspective and insight to our work."

White House announced in May that Tanden had been appointed as a senior adviser to Biden.

Tanden previously served as a senior adviser for health reforms at the US Department of Health and Human Services. She worked with Congress and stakeholders on particular provisions of former President Barack Obama's signature legislative achievement, the Affordable Care Act.

Before the 2008 presidential campaign, Tanden served as legislative director in Clinton's office, and deputy campaign manager and issues director for Clinton's 2000 Senate campaign.

She began her career as an associate director for domestic policy in former President Bill Clinton's White House, and senior policy adviser to the First Lady.