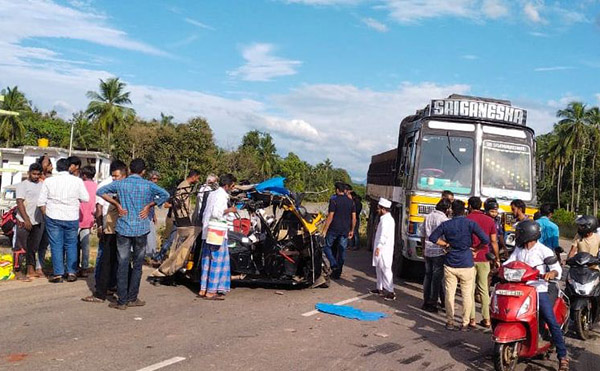 Mangaluru, Nov 30: A 12-year-old boy and his mother lost their lives and two others are undergoing treatment after a lorry rammed into an auto-rickshaw on national highway 75 at Matha near Uppinangady on Monday November 29.

T Mohammad Altaf (12), a sixth standard student of Hirtadka government primary school, died on the spot. His mother Khadeejamma (46), who had suffered severe injuries in the mishap breathed her lost today in a hospital.

Both of them were onboard the ill-fated auto-rickshaw which reduced into a bundle of metal in the mishap.

Altaf’s elder brother T Mohammed Asrar (23) and auto rickshaw driver, Siddique (34) from Hirtadka are now undergoing treatment in the hospital. Both of them stated to have suffered grave injuries and their condition is critical.

Khadeejamma, who was a resident of Bengare, Mangaluru had been to her parental home at Hirtadka near Matha along with children. Yesterday, the family visited Uppinangady town in a bus and was going back home in an auto rickshaw when tragedy struck. A lorry that was moving towards Mangaluru from the direction of Bengaluru collided with the auto rickshaw in bid to overtake another vehicle.

Khadeejamma’s husband late Ashraf, was a vehicle driver, had lost battle to cancer a couple of years ago despite spending hugely for treatment. Khateejamma was taking care of her children since then with the help of relatives.

Bengaluru, Nov 29: In a shocking incident, the dead bodies of two Covid-19 patients were found 15 months after they died at the ESI hospital mortuary in Rajajinagar in Bengaluru.

The authorities were planning to cremate the bodies on Monday as the family and relatives of one of the deceased did not show any interest in taking the body for final rites. And, the police were not able to trace another deceased person's whereabouts and family.

The bodies were identified with the help of tags as Durga (40), a resident of Chamarajpet and Muniraju (35), a resident of K.P. Agrahara in Bengaluru. Both were admitted to the ESI hospital for the treatment of Corona infection in July, 2020.

However, as they succumbed to the deadly virus, their bodies were shifted to an old mortuary to be handed over to the BBMP for disposal. As the Covid protocol, the BBMP, the civic agency, was to cremate the dead bodies of the Corona victims and the bodies were not given to the families.

The ESI hospital's old mortuary has six cold storages for keeping the dead bodies. However, during the spike in the Covid deaths, it had become difficult for the hospital authorities to keep the dead bodies at the mortuary.

The government had constructed a new mortuary, which was inaugurated in December, 2020. As the new mortuary started functioning, due to negligence these two bodies remained in freezers.

The cleaning staff, who went to clean the old mortuary, noticed foul smell emanating from freezers and found bodies. The Rajajinagar police have taken up the case and tried to track relatives. Durga's husband is dead and her family has not shown interest in taking her body. The police were trying to find out the address of Muniraju's family members.

The development has drawn sharp reactions from the public against the ESI hospital staff and doctors for utter negligence in handling of dead bodies.