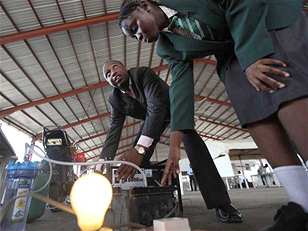 London, November 12: In a breakthrough, four teenage schoolgirls in Nigeria have invented a ‘pee-powered' generator that converts one litre of urine into six hours of electricity.

According to the Maker Faire blog, urine is put into an electrolytic cell, which cracks the urea into nitrogen, water, and hydrogen.

The hydrogen goes into a water filter for purification, which then gets pushed into the gas cylinder, the Daily Mail reported.

The gas cylinder pushes hydrogen into a cylinder of liquid borax, which is used to remove the moisture from the hydrogen gas.

This purified hydrogen gas is pushed into the generator, and one litre of urine provides six hours of electricity.

Maker Faire blog described the generator as “possibly one of the more unexpected products” at the event.

While the system does have one-way valves for safety, more robust measures may be needed before it can be sold widely.

The report noted: “Let's be honest that this is something of an explosive device”.

Nigeria's economy is on the rise, however, more than half of the country's 162 million citizens have no access to electricity, and even those who do can't guarantee having power every day, the report said.