Love-struck Diana was willing to move to Pakistan: Jemima Khan 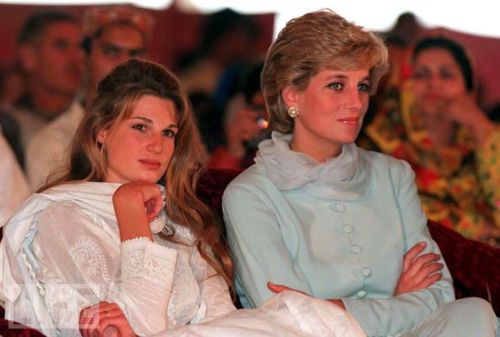 London, Aug 3: Princess Diana was so "madly in love" with Pakistani surgeon Hasnat Khan that she wanted to marry him and was even willing to move to Pakistan, according to Jemima Khan.

Jemima, the former wife of Pakistani cricketer-turned-politician Imran Khan and a friend of the late princess, has written a detailed account of their friendship in an article for the September issue of 'Vanity Fair' titled 'The Grandmother Prince George Never Knew'.

"Diana was madly in love with Hasnat Khan and wanted to marry him, even if that meant living in Pakistan, and that's one of the reasons why we became friends," she told the magazine.

"She wanted to know how hard it had been for me to adapt to life in Pakistan," she added, in reference to her own marriage to Imran Khan, which took her to Pakistan.

Jemima disclosed that Diana had visited her twice in Pakistan to help raise funds for the hospital where her former husband - a distant cousin of Diana's lover - worked.

"Both times she also went to meet his family secretly to discuss the possibility of marriage to Hasnat," she reveals.

Diana made every effort to get to know the surgeon's family but for a son to marry an Englishwoman "is every conservative Pashtun mother's worst nightmare", Jemima says in the article.

The couple are thought to have discussed the possibility of marriage. But Hasnat Khan apparently told her that "it was a ridiculous idea" and that the only way they could have a normal life would be to move to Pakistan, where the press "don't bother you". The surgeon reportedly revealed this in an interview to the police after Diana's death in a car crash in Paris in 1997.

As her love affair with the doctor began to crumble, Diana began a new relationship with Dodi Al Fayed.

The source of her apparent frustration with the surgeon - his reluctance to marry - was no longer an issue with Al Fayed, who she reportedly believed was going to give her a ring.

She told close friend Rosa Monckton, the former managing director of Tiffany & Co, that the ring was "going firmly on my right hand".

However, according to Monckton, Diana talked much more about Khan than Al Fayed and that the princess pursued the relationship only to make the surgeon jealous.

Love-struck Diana was willing to move to Pakistan: Jemima Khan