25 years in making, Encyclopedia of Hinduism unveiled in US 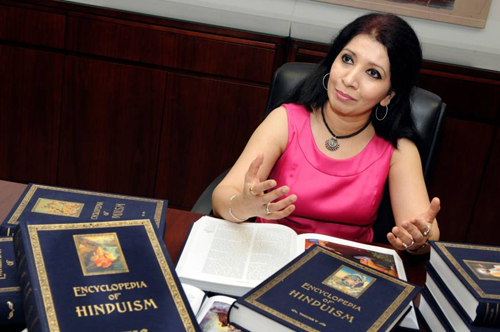 Columbia (South Carolina), Aug 27: A 25-year quest by nearly 1,000 scholars to document and present one of the world's oldest living traditions came to fruition when the 'Encyclopedia of Hinduism' was unveiled here today.

Hundreds of scholars, dignitaries, students, Hindu leaders and the public converged on the University of Southern California campus to witness the release of much anticipated and definitive 11-volume guide conceived, compiled and produced by the India Heritage Research Foundation.

The two-day event coinciding with the release featured some of the top Indian scholars who discussed the significance of the encyclopedia and the richness and diversity of Indian culture that binds more than one billion people worldwide.

The event is the launch of the international edition of the Encyclopedia of Hinduism. Tibetan spiritual leader Dalai Lama had launched the Indian edition in 2010 in Rishikesh.

Dr Harris Pastides, President of University of South Carolina, said that he was humbled to see the encyclopedia being launched in his campus.

"It is a deep honor to be participating in the American release of the Encyclopedia of Hinduism. This is a remarkable work of scholarship and research. I hope that many in academia and in everyday life will turn to it as a resource to better understand the characters, the tenets, and the impact that Hinduism has had, and is having in the world," he said.

Consul General Kumar said India and Hindus all over the world are grateful to the University of South Carolina for the launch of the monumental work.

The comprehensive encyclopedia has 11-volume work and it covers Hindu spiritual beliefs, practices and philosophy, and is the culmination of a 25-year academic effort.

The encyclopedia is written in English and includes about 7,000 articles on Hinduism and its practices.

The encyclopedia's volumes run from 600 to more than 700 pages. Some 3,000 copies are being printed in first edition.

Hinduism is the world's third-largest religion, with 1 billion followers, according to a Pew Research Center study. Christians number 2.2 billion and Muslims 1.6 billion.

25 years in making, Encyclopedia of Hinduism unveiled in US