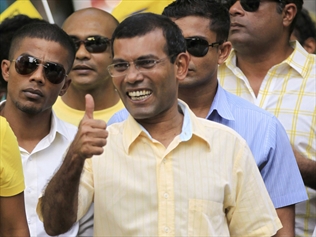 Male, Sep 8: Former President Mohammed Nasheed emerged as a clear leader today in the first round of Maldives' presidential election receiving 45 per cent votes but fell short of an outright majority resulting in a run-off between the top two candidates scheduled for later this month.

The Election Commission here announced results early this morning after a night-long counting, declaring Nasheed a clear winner in the first round of polls with 95,224 votes.

"These are preliminary results. We will be getting ballot papers from various islands in two days and if required corrections would be made by September 14 after which final results will be announced. But these corrections are not likely to have major impact on the results," President Election Commission Fuwad Taufeek said.

Under the country's election laws, if none of the candidates get more than 50 per cent of the vote, a run-off will take place between the top two candidates.

If final results do not bring much change, Nasheed will be facing a September 28 run-off against Abdullah Yameen.

On the alleged irregularities at some counting stations, the Election Commissioner said they have received complaints but it has not taken any decision on recount on any ballot.

Taufeek said if any party approaches court and gets a decision, they would be open for a recount in front of representatives of all the parties.

India has been engaging with both the candidates, Nasheed and Yameen, who are likely to contest for the second round, much before the elections.

India, which shares close ties with the archipelago nation, is of the view that multi-party democracy is in a very nascent stage and should be given time to deepen its roots here, they said.

First multi-party free elections were held in Maldives in 2008 after three-decades of Mohammed Abdul Gayoom's rule in which Nasheed won.

He had to resign after four years when security forces joined protests led by the opposition parties over the arrest of a judge. Nasheed's ouster resulted in the elevation of then Vice-President Mohammed Waheed as his successor.

Over 2229 local observers, 102 international obervers, 1343 representatives of political parties besides 1642 local and 225 international journalists are keeping a hawk's eye on the developments in this young multi-party democracy.