Indian-origin girl shot in US as prank goes awry 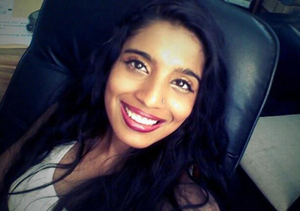 New York, Sep 10: In a freak accident , an 18-year-old Indian-origin girl was killed in the US when she jumped out of a closet to surprise a friend, who shot her thinking she was an intruder.

Premila Lal jumped out of a closet as a harmless joke to surprise Nerrek Galley, a 21-year-old family friend. But the noise startled the friend, who grabbed a gun and shot her, her father Praveen Lal said.

The incident happened on Friday night in Longmont, Colorado, north of Denver. The teenager's death was "unintended and extremely tragic," the police said in a statement.

"The closet opened and I think she jumped and screamed and he thought it was an intruder, so he pulled the trigged," the father said.

Just before 8 pm (local time) Premila Lal showed up at a house her family once called home. They had since moved, and were preparing to sell the place.

In the meantime, Galley was staying at the house. Premila Lal and her 12-yearold cousin apparently came to visit Galley. Lal's 15-yearold brother was also there hanging out with Galley.

Praveen Lal, said in interviews with the local media that his daughter entered the home without Galley's knowledge.

"We lost a daughter, so we don't want anybody else to lose their son, you know, especially when it was an accident ," Praveen Lal told Denver TV station KCNC.

Galley has been charged with reckless endangerment , child abuse and providing a gun to a juvenile because Lal's 15-year-old brother had access to the gun, the police said.

So far Galley has not been charged in Lal's killing . The police said that they do not suspect the involvement of alcohol or drugs.

Indian-origin girl shot in US as prank goes awry