Find peace in Bhagavad Gita in these chaotic times: US lawmaker Tulsi Gibbard 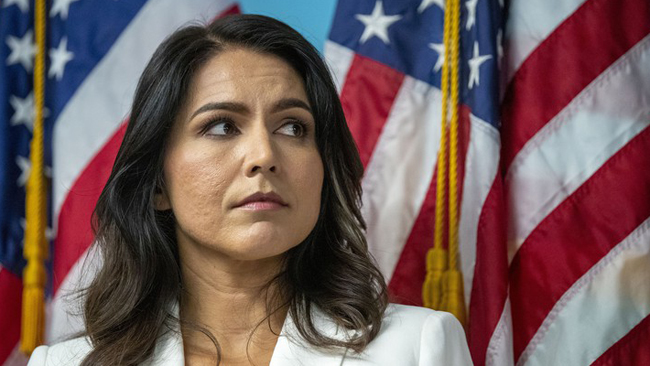 Washington, Jun 13: America's first-ever Hindu lawmaker Tulsi Gabbard has said that in this chaotic time, one can find certainty, strength, and peace in Bhagavad Gita.

In her message during a virtual commencement address, the 39-year-old Congresswoman from Hawaii said that it is a chaotic time and no one can say with certainty what tomorrow looks like.

"... but we find certainty, strength, and peace in the practice of Bhakti Yoga and Karma Yoga taught to us by Krishna in the Bhagavad Gita," Tulsi Gabbard told the 'Class of 2020 for Hindu students''.

Her address came amidst protests in the US against the killing of African-American George Floyd by a white police officer in Minneapolis.

The country has been swept by protests since George Floyd's custodial death on May 25 with thousands of people mounting pressure for changes to the law enforcement practices.

The first-ever virtual Hindu commencement was organised by the Hindu Students Council on June 7, which drew thousands of viewers on Facebook and YouTube Live, all coming together in solidarity during the ongoing COVID-19 crisis.

According to Johns Hopkins Coronavirus Resource Center, the contagion has infected over 76,00,000 people and killed more than 4,25,000 across the world. The US is the worst affected country with over 2.04 million cases and more than 1,14,000 deaths.

The COVID-19, which originated in China''s Wuhan city in December last year, has also battered the world economy with the International Monetary Fund saying that the global economy is bound to suffer a "severe recession".

Scientists are racing against time to find a vaccine or medicine for its treatment.

Hundreds of graduates from the US, Canada, the UK, India and Australia attended to commemorate their graduation in a unique way - by celebrating their shared Hindu values.

"As you think about this new chapter in your lives, ask yourself what is my purpose in life? It is a deep question that if you can recognise now that your purpose is to serve God and God''s children, practicing Karma Yoga, then you can lead a truly successful life," Tulsi Gabbard said.

"Success is not defined by temporary material things, trinkets, glittery objects or accomplishments - but a deeply successful and happy life centered around service," she added.

The Iraq war veteran ended her presidential campaign in March and offered her full support to former vice president Joe Biden, 77, who is all set to challenge Republican incumbent Donald Trump, 73, in November elections.

The commencement address focused heavily on themes from the Bhagavad Gita, a timeless historical text that many Hindus consider their moral framework.

Professor Kak, Regent Professor at Oklahoma State University and 2019 Padma Shri recipient, read out the names of the graduating students.

"I exhort you - the graduating students - to be the leaders of the new world where education is less of the mind of a vessel to be filled with information (usually forgotten after the semester is over), and more of a flame that is lit as envisioned by our Vedic sages," he said.

The student speakers were from many university campuses, including the Massachusetts Institute of Technology, Princeton, and Stanford.

Listen to the latest songs, only on JioSaavn.com

The programme included offerings of Hindu prayers, recitation of a traditional graduation message from the Upanishads, and a symbolic conferral of degrees to high school and college graduate.

Find peace in Bhagavad Gita in these chaotic times: US lawmaker Tulsi Gibbard