New Delhi, Nov 4: P Chidambaram will finally walk out of Tihar Jail after over 100 days as the Supreme Court on Wednesday granted bail to the former finance minister in the INX Media case. The court granted bail on a bond of Rs 2 lakh with two sureties each and asked Chidambaram not to leave the country without permission. 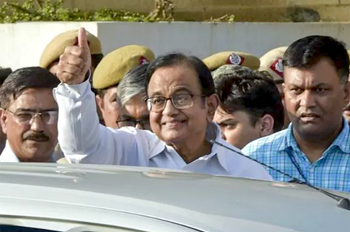 The former Union minister also cannot make public statements or press interviews with regard to the case.

A bench headed by Justice R Banumathi on November 28 had reserved judgment on the appeal filed by Chidambaram, who has challenged the November 15 verdict of the Delhi High Court denying him bail in the case.

During the arguments, the Enforcement Directorate (ED) had claimed in the apex court that the 74-year-old former finance minister continues to wield "substantial influence" on crucial witnesses in the case even from the custody, while he argued that the agency cannot "destroy" his career and reputation via baseless allegations.

Opposing his bail plea, Solicitor General Tushar Mehta, appearing for the ED, maintained that economic offences like money laundering are grave in nature as they not only affect the nation's economy but also shake people's faith in the system, especially when it is committed by those in power.

Senior advocates Kapil Sibal and AM Singhvi, representing the former minister, had countered Mehta's submissions and said there was neither any evidence linking Chidambaram directly or indirectly with the alleged offence nor there was any material to show he had influenced witnesses or tampered with any evidence.

Chidambaram was first arrested by the CBI on August 21 in the INX Media corruption case and was granted bail by the top court on October 22. The ED had arrested him on October 16 in the money laundering case.

The CBI registered its case on May 15, 2017, alleging irregularities in a FIPB clearance granted to the INX Media group for receiving overseas funds of Rs 305 crore in 2007, during Chidambaram's tenure as finance minister. The ED afterward lodged a money-laundering case.

With India's inflation ticking higher, it may be time for RBI to pause

New Delhi, Jul 16: With India's economic growth sputtering, the Reserve Bank of India was expected to maintain a rate-cutting cycle, but an uptick in near-term inflation could give the central bank's Monetary Policy Committee reason to pause for now.

Having cut its key lending rate by an aggressive 115 basis points (bps) in 2020, on top of 135 bps cuts in 2019, the RBI so far has had little success in spurring credit growth amid varying degrees of lockdowns across India.

Some economists and market insiders argue it may be prudent for the MPC, the policy committee, to hold its fire when it meets early next month.

"It's probably too early to administer a demand stimulus. The RBI still has room to cut rates, but we probably want to be more cautious of the timing," said Venkat Pasupuleti, portfolio manager at Dalton Investments.

"Maybe they should wait a quarter to see how things pan out once the lockdown situation is eased further."

Market participants have factored in at least a 25 bps rate cut by the MPC on August 6 while analysts are predicting a total 50-75 bps cuts over the rest of the fiscal year that runs to March 31.

The spike in the retail inflation rate above the RBI's mandated 2%-4% target range is another reason for the central bank to take a breather, analysts say.

Annual retail inflation rose to 6.09% in June, compared to 5.84% in March and sharply above a 5.30% median forecast in a Reuters poll of economists.

Rahul Bajoria, an economist at Barclays, said the spike in both consumer and wholesale prices "could lead to a tempering in enthusiasm for material front-loaded policy support from here on."

Almost all economists however agreed the RBI cannot move away from its accommodative stance or call an end to the rate cutting cycle just yet.

"Even in the event of a pause, we think the RBI and MPC would want to hold out the promise of more cuts," said A. Prasanna, economist with ICICI Securities.

RBI Governor Shaktikanta Das said in a recent speech the need of the hour is to restore confidence, preserve financial stability, revive growth and recover stronger, suggesting inflation concerns are unlikely to deter the downward trajectory for rates too soon.

"The August policy decision would boil down to a judgment call over whether RBI can maintain easy monetary and financial conditions without the aid of a token rate cut," Prasanna said.

New Delhi, Jul 15: Air India has started the process of identifying employees, based on various factors like efficiency, health and redundancy, who will be sent on compulsory leave without pay (LWP) for up to five years, according to an official order.

The airline's board of directors have authorised its Chairman and Managing Director Rajiv Bansal to send employees on LWP "for six months or for a period of two years extendable upto five years, depending upon the following factors - suitability, efficiency, competence, quality of performance, health of the employee, instance of non-availability of the employee for duty in the past as a result of ill health or otherwise and redundancy", the order said on Tuesday.

The departmental heads in the headquarter as well as regional directors are required to assess each employee "on the above mentioned factors and identify the cases where option of compulsory LWP can be exercised", stated the order dated July 14.

"Names of such employees need to be forwarded to the General Manager (Personnel) in headquarter for obtaining necessary approval of CMD," the order added.

In response to queries regarding this matter, Air India spokesperson said,"We would not like to make any comment on the issue."

Aviation sector has been significantly impacted due to the travel restrictions imposed in India and other countries due to the coronavirus pandemic. All airlines in India have taken cost-cutting measures such as pay cuts, LWP and firings of employees in order to conserve cash flow.

For example, GoAir has put most of its employees on compulsory LWP since April.

India resumed domestic passenger flights from May 25 after a gap of two months due to the coronavirus pandemic.

However, the airlines have been allowed to operate only a maximum of 45 per cent of their pre-COVID domestic flights. Occupancy rate in Indian domestic flights has been around 50-60 per cent since May 25.

The passenger demand for air travel will contract by 49 per cent in 2020 for Indian carriers in comparison to 2019 due to COVID-19 crisis, said global airlines body IATA on Monday.

Twitter apologises for mega crypto hack, says it is embarrassed and disappointed

Days after Twitter accounts of several billionaires were hacked to engineer a crypto scam, Twitter on Saturday said it is embarrassed, disappointed and, more than anything, sorry for what happened with some of its high-profile users as attackers successfully manipulated its employees and used their credentials to access internal systems, including getting through the two-factor protections.

In the first detailed summary of the "social engineering attack" via a crypto scam that hit at least 130 users this week, Twitter said for 45 of those accounts, the attackers were able to initiate a password reset, login to the account and send Tweets.

"We are continuing our forensic review of all of the accounts to confirm all actions that may have been taken. In addition, we believe they may have attempted to sell some of the usernames," the micro-blogging platform said in a statement.

For up to eight of the Twitter accounts involved, the attackers took the additional step of downloading the account's information via "Your Twitter Data" tool.

"We are reaching out directly to any account owner where we know this to be true. None of the eight were verified accounts," said Twitter.

The company said the attackers were not able to view previous account passwords, as those are not stored in plain text or available through the tools used in the attack.

"Attackers were able to view personal information including email addresses and phone numbers, which are displayed to some users of our internal support tools," informed Twitter.

In cases where an account was taken over by the attacker, they may have been able to view additional information, Twitter added, saying its forensic investigation of these activities was still ongoing.

"We are actively working on communicating directly with the account-holders that were impacted".

The company said it will soon restore access for all account owners who may still be locked out as a result of the remediation efforts.

The New York Times reported on Friday that the Twitter crypto scam can be traced back to a group of hackers who congregate online at OGusers.com, a username-swapping community where people buy and sell coveted online handles.

The report said that the Twitter hack is not from Russian, Chinese or North Korean hackers but was done by a group of young people, "one of whom says he lives at home with his mother".