Washington, Dec 10: A federal US commission on international religious freedom has said that the Citizenship (Amendment) Bill is a "dangerous turn in wrong direction" and sought American sanctions against home minister Amit Shah if the bill is passed by both houses of the Indian Parliament. 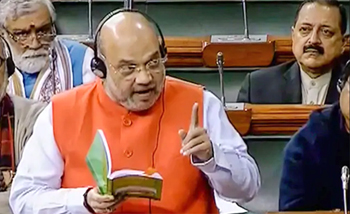 According to the proposed Bill, members of Hindu, Sikh, Buddhist, Jain, Parsi and Christian communities, who have come from Pakistan, Bangladesh and Afghanistan, till December 31, 2014 facing religious persecution there, will not be treated as illegal immigrants but given Indian citizenship.

In a statement issued on Monday, the US Commission for International Religious Freedom (USCIRF) said that it was deeply troubled over the passage of the bill in Lok Sabha.

"If the CAB passes in both houses of Parliament, the US government should consider sanctions against the home minister Amit Shah and other principal leadership," the commission said.

"USCIRF is 'deeply troubled' by the passage of the CAB, originally introduced by home minister Shah, in the Lok Sabha given the religion criterion in the bill," it added.

Shah on Monday introduced the controversial bill in Lok Sabha,

where it was passed with 311 members favouring it and 80 voting against it, will now be tabled in the Rajya Sabha for its nod.

Shah while introducing the bill had made it clear that people belonging to any religion should not have any fear under Prime Minister Narendra Modi government as he asserted that the bill will give relief to those minorities who have been living a painful life after facing persecution in neighbouring countries.

Shah asserted that the bill has the "endorsement of 130 crore Indian citizens" and rejected suggestions that the measure is anti-Muslims, saying it will give rights to persecuted minorities from Pakistan, Bangladesh and Afghanistan.

"Citizenship (Amendment) Bill has the endorsement of 130 crore citizens of the country as it was the part of the BJP manifesto in 2014 as well as 2019 Lok Sabha elections," he said.

However, the bill has been opposed by the Congress, Trinamool Congress and other Opposition parties.

USCIRF alleged that the CAB enshrines a pathway to citizenship for immigrants that specifically excludes Muslims, setting a legal criterion for citizenship based on religion.

"The CAB is a dangerous turn in the wrong direction; it runs counter to India's rich history of secular pluralism and the Indian Constitution, which guarantees equality before the law regardless of faith," it said.

Stating that in conjunction with the ongoing National Register of Citizens (NRC) process in Assam and nationwide NRC that home Minister Shah seeks to propose, the commission said: "USCIRF fears that the Indian government is creating a religious test for Indian citizenship that would strip citizenship from millions of Muslims".

It also said that for more than a decade now the Indian government has ignored the statements and annual reports of the USCIRF.

India from the days of the previous United Progressive Alliance (UPA) regime has consistently said that it does not recognises a third country's views or reports on its internal affairs.

It is based on this ground that India for more than a decade now has denied visas to USCIRF to travel to India for their on the ground assessment of the religious freedom in India.

Recommendations of USCIRF are not enforceable. However, its recommendations are seriously taken into consideration by the US government in particular the State Department which is tasked with powers to take sanctionable actions against foreign entities and individuals for violation of religious freedom and human rights.

Death toll in Munnar landslide reaches 43; another 35 are still missing

Munnar, Aug 9: Death toll in the Pettimudi landslide near Munnar reached 43 as 17 more bodies were recovered on Sunday, while around 35 are still missing.

Two specially trained sniffer dogs of Kerala police, including one of Belgian Malinois breed, was also used for tracking bodies inside the debris.

A Fire and Rescue Service personnel involved in the rescue was tested Covid-19 positive. Hence, a team of rescue workers were advised to go into quarantine.

Meanwhile, many parts of Kerala were flooded as rivers breached the banks. A youth drowned after his car was washed away at Kottayam district. Red alert has been issued at seven districts and orange alert in six districts. Kuttanad in Alappuzha, Tiruvalla and Aranmula in Pathanamthitta and Kottayam were flooded as water level of Pamba and Meenachal rivers rose.

At Kuttanad, many houses are almost under water. Massive destruction to agriculture was also caused. Minor landslides and landslips were reported from parts of Kasargod and Wayanad. But no major casualties were reported.

A high alert was issued at Rani area of Pathanamthitta as Pamba dam was opened. Around 20 boats were kept ready at Ranni for shifting people. At Aranamula in Pathanmathitta, scores of units involved in the making of traditional Aranmula mirror making, already shifted raw materials as they suffered massive damages in 2018.

Anticipating flood, many people already shifted to safer locations. Thousands of families were shifted to relief camps by rescue workers across the state.

Water level of all dams is also rising and is being monitored regularly. Kerala also sought Tamil Nadu's permission to take excess water from Mullaperiyar dam to Vaigai dam through tunnel.

Chennai, Jul 25: Two weeks after a 62-year-old widow accused him of harassment, including urinating outside her house, the Chennai Police on Saturday registered an FIR against ABVP national president Dr Subbiah Shanmugam. 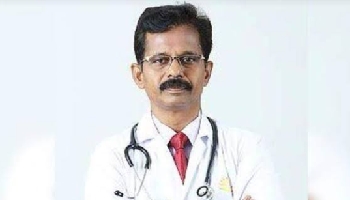 The FIR was lodged exactly two weeks after the woman’s relative Balaji Vijayaraghavan filed a complaint with the Adambakkam police accusing Dr Shanmugam of harassing his aunt, who is living alone in her apartment following her husband’s death last year, following an argument over a parking slot.

The action came after Vijayaraghavan alleged that the police were not filing an FIR due to the ABVP functionary’s “political connections.”

Dr Shanmugam and the woman were living in the same apartment complex in Nanganallur and an argument broke between them over a parking slot.

“He wanted to use our parking lot. We agreed but demanded a nominal charge for using it. He was outraged by our demand and even broke our signboard at the parking lot,” Vijayaraghavan wrote in his complaint.

He also alleged that Dr Shanmugam began harassing her by throwing “pieces of chicken” outside her apartment despite knowing she is a vegetarian.

CCTV footage corroborates with the allegations of urinating outside the residence of the widow. However, the ABVP called the incident as a “malicious and derogatory propaganda” by the Congress’ student wing of NSUI.

"The video shared by NSUI with an allegation of harassment is tampered with and is being used with malafide intentions. The two families have discussed this within their housing society and have already concluded that the harassment allegations were caused due to misunderstandings and are untrue,” ABVP National General secretary Nidhi Tripathi said.

Vijayaraghavan also alleged in his two-page written complaint that the ABVP national president had urinated outside the woman’s apartment gate and had been throwing garbage and used masks at her gate.

In his complaint, Vijayaraghavan also said the family was “concerned about her safety” while asking police to take action against Dr Shanmugam, who he says, “has a bad track record in maintaining rapport with neighbours.”

New Delhi, Jul 16: With the highest single-day spike of 32,695 cases and 606 deaths reported in the last 24 hours, India's COVID-19 tally on Thursday reached 9,68,876, informed the Union Ministry of Health and Family Welfare on Thursday.

Meanwhile, as per the information provided by the Indian Council of Medical Research (ICMR), 1,27,39,490 samples have been tested for COVID-19 till 15th July, of these 3,26,826 samples were tested yesterday.