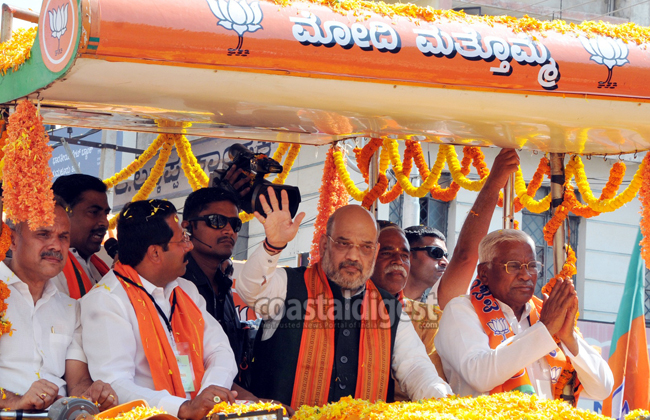 Addressing an election rally here, Shah said: "JDS got the lowest number of seats in the assembly elections while the BJP got the most, however, Congress through its corrupt practices ensured that JDS government is formed in the state."

"Under UPA government, Karnataka only got Rs 88,583 crore, but under the BJP's tenure through the 14th finance commission, Rs 3,88,971 crore has been allocated to the state," added Shah.

Mocking the grand alliance, Shah said, "If 'gathbandhan' (grand-alliance) comes to power after elections, then we will have six different prime ministers on six different days of the week and on the seventh day there will be a holiday."

Recounting the work done by the BJP government at the Centre, Shah said: "In the past five years new passports and visa centres have been opened here. In Harihar town around 275 hectares land was used to develop fertilizer industry, this decision was taken by BJP... We have given funds for smart cities projects. Shimoga railway lines project work will begin soon."

The BJP president said, "The BJP government has secured India from the menace of terrorism. We lost 40 jawans in Pulwama, but Narendra Modi government did air strikes in Pakistan and demolished terrorists there.

"Congress asks for talks with Pakistan, I want to ask how can we talk with those who killed our soldiers in Pulwama. We will always give a befitting reply to Pakistan, added the BJP president.