Bengaluru, May 11: Karnataka BJP president BS Yeddyurappa has claimed that his party will come to power with the help of disgruntled Congress MLAs after results for the Lok Sabha polls are declared on May 23. 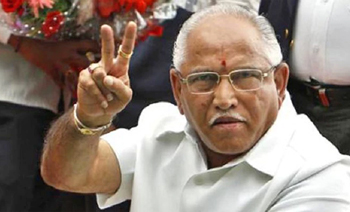 Speaking to reporters after meeting party leaders and workers here, Yeddyurappa said that as many as 20 Congress MLAs, who are unhappy with the way the JD(S)-Congress coalition government is functioning, are ready to switch sides to the BJP.

He further said: “The BJP’s strength in Assembly will increase from existing 104 to 106 after Kundgol and Chincholi by-elections. Two independent MLAs will support the BJP. Infighting in the Congress-JD(S) alliance is out in the open. The coalition partners are worried about the impact of the results of the Lok Sabha elections and Assembly bypolls on the government. Let us wait and see on the moves by the disgruntled Congress MLAs after May 23.”

“Chief Minister H D Kumaraswamy is staying in a resort. The coalition government is not responding to people’s problems. The political atmosphere in the state has spurred us to work enthusiastically,” Yeddyurappa added.

At any cost he wants to be CM again by hook or crook. He doesn't hesitate to do any shameless thing to achieve his dream.

He is another pain  in ass in Karnataka like Modi.