Bengaluru, Dec 7: Criticising the Union Government for delaying in releasing the state government’s share of GST collection, the KPCC president Dinesh Gundu Rao, had threatened to launch a stir against Central government on the issue.

Addressing newsmen here on Saturday, the Karnataka Congress president, Rao said that “by delaying the state’s share of GST collection, the developmental works would hurt badly”.

Bengaluru, Jul 11: The Bharatiya Janata Party led government of Karnataka is planning to ban cow slaughter as well as the sale and consumption of beef in the state by bringing Prevention of Cow Slaughter and Preservation Bill, 2012.

"Many states have passed the Anti-Cow Slaughter Bill. We are preparing to implement it in Karnataka as well. The state government will soon implement a ban on cow slaughter, sale and consumption of beef on the lines of many other states," said Prabhu Chauhan, the state's Animal Husbandry Minister.

The Anti-Cow Slaughter Act is already in place in several states like Gujarat, Delhi, Haryana, Maharashtra, Madhya Pradesh among others.

In Karnataka, the BJP-led government had promised to ban cow slaughter in its manifesto for 2018 state assembly election.

"The government will form a team of experts to look into once the current pandemic situation eases," Chauhan stated, adding that if necessary, the team of experts will visit states like Uttar Pradesh, Gujarat.

The then BS Yediyurappa-led BJP government had passed the Karnataka Prevention of Cow Slaughter and Protection Bill in 2010 but it failed to get presidential approval. Three years later, the Bill was withdrawn by the Siddaramaiah-led Congress government.

"I will discuss this matter with Chief Minister and if this pandemic situation eases, by next session, if not by upcoming assembly session, we will try to bring Karnataka Prevention of Slaughter and Preservation of Cattle Bill," Chauhan added.

now india is ruled by most unfit people in the world...

the main point is here is the business, they know very well muslims make profit in meat business and now they want to steal from them...gomata, protection all these are bullshit...only gobar bakth will belive...

Meanwhile, a 100-year-old woman resident of Huvina Hadagali town in Bellary district here recovered from COVID-19 after testing positive for the virus earlier this month.

"Doctors treated me well. Along with regular food, I was eating an apple a day. The doctors are giving me tablets and injection, and I am healthy now. COVID-19 is like a common cold," said Hallamma while speaking to news agency.

The woman's son, daughter-in-law, and grandson had also tested positive for the virus, and the family was treated at their home.

India reported a spike of 48,916 coronavirus cases on Saturday, taking the total number of reported COVID-19 cases to 13,36,861, according to the Union Ministry of Health and Family Welfare. 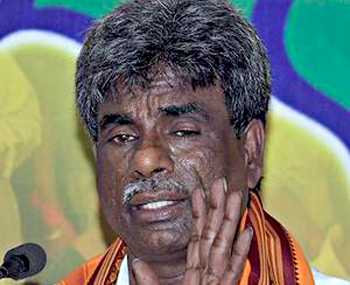 The Minister was addressing a meeting at the Father Muller Medical College here on the arrangements made for COVID-19 patients.

Dakshina Kannada district is quite advanced in the medical field. Hence, the government will not tolerate COVID-19 patients wandering from one hospital to another for treatment. Refusing to admit COVID-19 patients in hospitals is unacceptable, he warned.