Petrol, diesel at all-time high after prices hiked for the 4th straight day

Petrol price for the fourth straight day hiked by 25 paise a litre and diesel by 30 paise, according to a price notification of state-owned fuel retailers.

Prices differ from state to state depending on the incidence of local taxes.

Petroleum Secretary Tarun Kapoor said that oil companies are taking their own decision on aligning retail rates with the cost but they are ensuring extreme volatility is avoided.

"We are watching the situation and trying to ensure the impact of global volatility is moderated to a large extent," he said.

The basket of crude oil India buys has jumped to a near three-year high of $76.71 per barrel. International prices of petrol, against which local rates are benchmarked, have risen from $85.10 per barrel to $87.11 in just one day while diesel has gone up from $85.95 a barrel to $87.27.

This sudden spike in international oil prices follows global output disruptions but the entire increase in retail rates necessitated by such an increase is not being affected, another official with direct knowledge of the matter said.

"Just look at LPG rates. They have gone up from $665 to $797 in one month but oil companies haven't passed on the increase warranted from that," he said adding state-owned companies were absorbing a lot of volatility.

The increases, he said, have been "mild to moderate".

"Some people are making a big deal out of the 62 per cent hike in natural gas prices. But if you look at the rates previously at $1.79 per million British thermal units were abnormally low and way below cost. They have now gone up to $2.9. They still are less than the cost of production of $3.5 per mmBtu and are certainly lower than the $4.2 price that was prevalent in India a decade back," the official said.

Naturally, the hike in natural gas price will warrant an increase in CNG price but the increase is again being moderated there too, he said adding internationally the price of LNG in the spot market last week soared to an unprecedented $35.

"Compare to what is happening worldwide, we have managed the situation well," the official said. "Some of the developed nations such as the UK have seen petrol pumps go dry but you won't have heard of such a situation anywhere in India. Our oil companies are not just moderating retail prices but also ensuring uninterrupted supplies."

Officials said India believes the situation internationally is temporary and abnormal and things should stabilise over the next few days and weeks.

The fifth increase in its rates in less than a week's time has sent petrol prices above Rs 100 in most major cities of the country.

Similarly, the eighth increase in prices in 10 days has shot up diesel rates above Rs 100 mark in several cities in Madhya Pradesh, Rajasthan, Odisha, Andhra Pradesh and Telangana.

In eight price increases since September 24, diesel rates have gone up by 2.15 paise per litre. Petrol price has increased by Rs 1.25 per litre in five instalments this week.

When international oil rates fell in July and August, retail prices of petrol and diesel in the Delhi market were reduced by Rs 0.65 and Rs 1.25 per litre.

Prior to that, the petrol price was increased by Rs 11.44 a litre between May 4 and July 17. Diesel rate had gone up by Rs 9.14 during this period.

India is dependent on imports to meet nearly 85 per cent of its oil needs and so benchmarks local fuel rates to international oil prices.

Farmer leaders on Saturday, October 9, demanded that Union Minister Ajay Mishra and his son be arrested in the Lakhimpur Kheri violence case, and said the incident was a “pre-planned conspiracy”.

Ajay Mishra should also be removed from the government as he started this conspiracy and is also protecting the culprits in the case, Sanyukt Kisan Morcha (SKM) leader Yogendra Yadav alleged during a press conference here.

He also said that the SKM on October 15, which is Dusshera, will burn the effigies of Prime Minister Narendra Modi and Home Minister Amit Shah to protest against the violence.

In the incident on Sunday in Uttar Pradesh’s Lakhimpur Kheri, eight people were killed, including four farmers.

The incident was part of a pre-planned conspiracy and the attackers tried to terrorise farmers, farmer leader Darshan Pal said at the press conference of the SKM, an umbrella body of farm unions, spearheading the stir against three agri laws.

He also claimed that the government has adopted a violent approach against protesting farmers. But “we won't take the path of violence”, Ugrahan asserted.

Four of the eight people who died in the violence on Sunday were farmers, allegedly knocked down by a vehicle carrying BJP workers. Angry farmers then allegedly lynched some people in the vehicles.

The other dead included two BJP workers and their driver.

Farmers claimed that Ashish Mishra was in one of the vehicles, an allegation denied by him and his father who say they can produce evidence to prove he was at an event at that time.

The SKM also said that on October 18 it will call 'rail roko' to protest the Lakhimpur Kheri violence.

The Shiv Sena on Friday called for the need to appoint a full-time Congress president, and said the confusion prevailing over the leadership in the party was as much responsible for the political crisis in Punjab as the BJP.

The Sena also claimed that although Rahul Gandhi was trying to resolve the issues faced by the Congress, the old-timers in the party were in a secret pact with the BJP to stop him from doing so with the aim of sinking the party.

"Congress needs a full-time president. What is the use of a body without a head?...Congress is ailing and it is being treated, but whether that treatment is right or not needs to be reviewed," the party said in an editorial in its mouthpiece Saamana.

"Rahul Gandhi is trying to fix the leakages in the old mansion (Congress), but some old feudal lords are not letting the new people work. They have started claiming ownership over several things in the mansion…It is now confirmed that the party's old guard is in a secret pact with BJP and they are trying to sink Congress," it alleged.

But if there is no commander, how will the party fight? This demand of some wise Congress veterans is not wrong. The answer to this question over leadership question is the Gandhi family, but who exactly from among them is a question that persists, said the Uddhav Thackeray-led party, which shares power in Maharashtra with Congress and NCP.

The doubt and confusion over the leadership in Congress needs to be cleared, it added. Rahul Gandhi has taken a strong step by appointing a Dalit leader as the chief minister of Punjab, but his own dear Navjot Singh Sidhu has created problems for him. As there was already no dearth of leaders in Congress who shoot their mouths off, there was no need for Rahul Gandhi to show so much trust in Sidhu, who joined the party recently, the Sena said.

Congress has increased its own troubles by giving undue importance to this unpredictable leader, it added. Criticising former Punjab chief minister Amarinder Singh and also Goa's ex-CM Luizinho Faleiro, who has now joined the Trinamool Congress (TMC), the Sena said, "It is the height of their thick-skinned behaviour.

These leaders were given top posts, like chief minister of their respective states by the Congress, but they are now leaving the party." Similarly, Jitin Prasada was made a union cabinet minister when Congress was in power.

However, he joined BJP later and made a minister in the party-led UP government, it said. Congress has been in power for many years in the country and presently ruling in some states. However, the party has been facing problems after the BJP came to power and Narendra Modi became the prime minister, the Sena said. 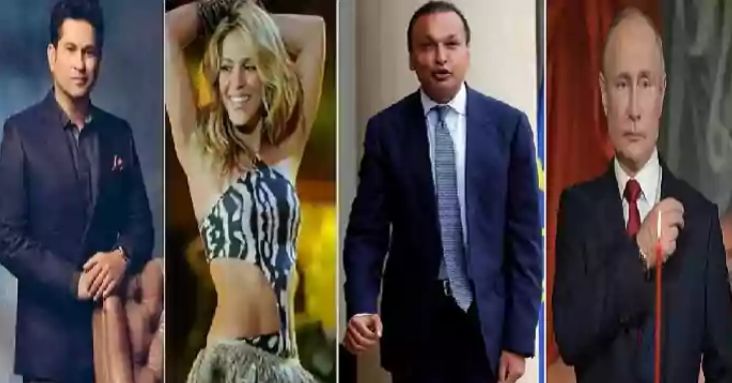 Millions of leaked documents dubbed the Pandora Papers and a worldwide journalistic partnership on Sunday claims to have uncovered financial secrets of current and former world leaders, politicians and public officials in 91 countries and territories, including India.

The International Consortium of Investigative Journalists (ICIJ), which involved the BBC and The Guardian newspaper in the UK and ‘The Indian Express’ in India among 150 media outlets in its investigation, claims it obtained the trove of more than 11.9 million confidential files to find secret financial dealings of many super rich.

On a world map highlighting the number of politicians linked with offshore dealings, India is shown as having six and Pakistan seven.

"ICIJ’s latest investigation, the Pandora Papers, brings renewed attention to the use of offshore companies by Pakistani political players. This time, the offshore holdings of people close to (Prime Minister Imran) Khan are being disclosed, including his finance minister and a top financial backer,” the findings claim.

A spokesperson for Khan told a press conference that if any of his ministers or advisors had offshore companies, “they will have to be held accountable”.

According to the ICIJ, its secret documents expose offshore dealings of the likes of the King of Jordan, the presidents of Ukraine, Kenya and Ecuador, the Prime Minister of the Czech Republic and former British Prime Minister Tony Blair. The files also reveal financial activities of Russian President Vladimir Putin’s “unofficial minister of propaganda” and more than 130 billionaires from Russia, the US, Turkey and other nations.

The ICIJ says the leaked records come from 14 offshore services firms from around the world that set up shell companies and other offshore nooks for clients often seeking to keep their financial activities in the shadows.

It says the global investigation provides an "unequalled perspective" on how the rule of law has been “bent and broken” around the world by a system of financial secrecy enabled by wealthy nations.

"The findings by ICIJ and its media partners spotlight how deeply secretive finance has infiltrated global politics – and offer insights into why governments and global organisations have made little headway in ending offshore financial abuses,” it notes.

The ICIJ analysis of the secret documents identified 956 companies in offshore havens tied to 336 high-level politicians and public officials, including country leaders, cabinet ministers, ambassadors and others.