Mangaluru, Dec 7: Mangalore City Police have booked a case against a person for allegedly demanding the 'encounter' of former Union Minister and Congress leader B Janardhana Poojary. The suspect who claimed to be an ardent supporter in his statement said that he was upset with Poojary for his pro-Ram Temple remarks, however had no criminal intent.

On Thursday, the Kavoor police booked a case against Hakeem Puttur under IPC 504 (intentionally trying to provoke breach of the peace) and IPC 507 (criminal intimidation). The development comes less than a week after the alleged voice message circulated against 81-year old veteran Congress leader.

In the 'audio', Hakeem has allegedly criticized Poojary, after the leader spoke in favour of the construction of Ram Mandir. Hakeem further demanded that Poojary needs to be 'encountered' or deported from the country along with everyone who demands for Ram Mandir.

"Muslims should not support Congress until Poojary is suspended from the party. Poojary was born to RSS. He has association with the RSS and tries to hide his identity behind the Congress mask. I have been repeating this fact since 10 years but I was rebuked. However, things became clear after he invited Kalladka Prabhakar Bhat and other RSS affiliates and not then (Karnataka) Chief Minister Siddaramaiah for his book release.”

Going further, the message also demanded the explanation from Congress on why party functionaries were retaining Poojary for so long despite his questionable actions that destroyed the party at polls. "Poojary's statement against Siddaramaiah during the previous Assembly election, lead to the downfall of Congress in Dakshina Kannada... once involved in the destruction of the image of the party, how can one take claim for its growth?” he questioned.

While former Mangaluru South MLA, J R Lobo had filed a police complaint against the voice-message and had sought a detailed probe, even Dakshina Kannada MP Nalin Kumar Kateel had expressed condemnation.

Meanwhile, taking on the 'voice message' (authenticity of the voice, could not be verified till the publication of this report) route again, the suspect allegedly floated another message, while apologising for his remark against Poojary, he reiterated that the former Union Minister should not have made remark favouring the construction of Ram Temple. "I have not said anywhere, I will kill Poojary. I have only said that anyone who violates Constitution, including Poojary must either be killed in an encounter or deported out of the country... Being a Congress leader how he can make such statements when the matter is in the court," the voice said. 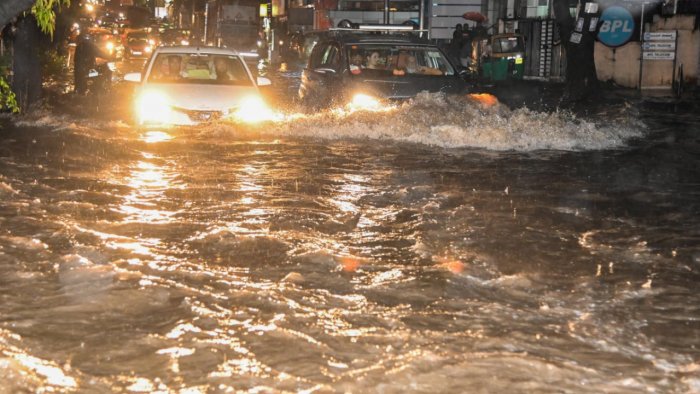 Bengaluru/Mangaluru, May 18: Even before the monsoon sets in, many parts of Karnataka are receiving heavy to very heavy rainfall and the same situation is likely to continue throughout the week.

Rainwater entered many homes in a slum in Narasimha Colony, South Bengaluru.

A group of citizens who run a Twitter account dedicated to Bengaluru’s weather said the rainfall had crossed 10 cm in some places.

Authorities have declared an orange alert for Bengaluru on Wednesday, meaning there will be heavy rainfall in several parts of the city and authorities must be prepared.

The India Meteorological Department (IMD) has forecast a generally cloudy sky with a few spells of rain or thundershowers for the next five days.

The India Meteorological Department (IMD) has sounded orange and red alerts (heavy to very heavy rainfall) in all districts of coastal Karnataka on Wednesday and Thursday. The rains will mainly occur as a result of moisture-laden strong westerly winds in the Arabian Sea and a few other systems, according to the weatherman.

“The strong westerlies are blowing towards the coasts of Kerala and Karnataka at 1.5 km above sea level. There is also an upper air cyclonic circulation at 3.6-5.8 km above sea level in Lakshadweep, which is prevailing over Tamil Nadu and its neighbourhood. There is a north-south trough extending 900 metres above mean sea level from Madhya Pradesh to Tamil Nadu across interior Karnataka. All of this will result in heavy rainfall in the State for the next few days,” said a scientist at IMD Bengaluru.

In all, districts of south-interior Karnataka, yellow alert has been issued on Tuesday and orange alert has been issued on Wednesday and Thursday by the IMD. Ahead of the alerts in coastal Karnataka, district administrations of Dakshina Kannada and Udupi have advised people to stay cautious and not enter waterbodies. They have also advised the fishermen to not enter the sea for three days.

Even though the intensity might subside for a while before monsoon sets in, the rainfall across the State is expected to continue through next week too. “It can be said that summer is mostly over in the State. These rain spells will be followed by the monsoon, which will set across the State between June 7 and 10,” a scientist explained.

Bengaluru, May 17: Karnataka Governor Thaawarchand Gehlot today gave his assent to the anti-conversion ordinance. The notification has been issued promulgating the ordinance which means the law will now be in effect in the state "at once".

Karnataka is the 9th state to enact the anti-conversion law.

The controversial law prohibits “conversion from one religion to another religion by misrepresentation, force, fraud, undue influence, coercion, allurement or marriage”.

The law proposes imprisonment of 3-5 years with a fine of Rs 25,000 for ‘forced’ conversion.

People wanting to convert are required to declare at least 60 days in advance to the deputy commissioner and within 30 days after the conversion.